Whatever you think of the food, Itsu’s biggest success – for me, anyway – may be how it’s transformed the bottom of Queen Victoria Street, banishing the grisly memory of temporary shop after temporary shop selling nylon shoes or mobile phone accessories. It gives that corner a certain glow, all shiny, fresh and welcoming; it’s strange how even though it’s only been open for a couple of months, it somehow feels like it’s been there forever.

It forms part of a long-established trend, which on balance is probably a good thing, of smaller, more exclusive chains picking Reading to be in the vanguard for any expansion plans. Bill’s started this, of course, and then there was Five Guys, but although Itsu is the latest it’s unlikely to be the last: West Country pizza and cider chain The Stable is rumoured to be opening on Bridge Street, and Bristol-based barbecue specialists Grillstock were linked to a site on Friar Street recently.

Itsu wasn’t top of my wish list of chains (I’d love a branch of Leon or Busaba, personally) but it’s an intriguing prospect – a place offering healthy lunches and dinners low in calories and saturated fats. Salads, smoothies, sushi, sashimi: splendid, surely? I’m one of those people who goes to Yo! Sushi with the best of intentions and then ends up ordering anything and everything the kitchen has to fry, but I decided to put my reservations (and my love of alliteration) to one side and give it a try one weekend lunchtime.

Inside, the chillers are packed full of options – sushi and sashimi on the left and salads on the right (although many of the salads are in fact on a bed of sushi rice, which in some cases can make your dish look more like maki that couldn’t be bothered to get dressed). There’s also a range of hot noodle and rice dishes which you pick up at the counter. I decided to order a little of everything – in the interests of balance, naturally – so I headed up the stairs with a heavy tray and a growing sense of excitement.

Now, before I get on to the food I’m afraid I need to wax lyrical about the view from upstairs, so feel free to skip this paragraph. It really is a gorgeous spot up there, full of tastefully done long tables with stools, USB charging points – which could come in handy if you plan to be on your iPhone for longer than, I don’t know, fifteen minutes – and most importantly a gorgeous first floor view out across town through the lovely floor to ceiling windows. In one direction you get to look up Queen Victoria Street, a symphony in Victorian red brick only equalled by the Town Hall, in the other you get to gaze out on John Lewis, one of Reading’s most handsome and iconic buildings. You can even make out, behind some of the façade, the word “HEELAS” in block capitals on the front of the building, a little detail for those of us who still think of it that way. It made me realise how few restaurants in Reading give you a view to go with your food, unless you happen to be a fan of Ed’s Diner (is anyone, I wonder?).

That architectural diversion aside, let’s start with the good news: the chicken teriyaki potsu (Itsu’s slightly twee way of saying it comes in a cardboard pot) was truly splendid. Lots of slices of tender thigh meat, so much more interesting than breast, sat on top of a big pile of brown rice, itself so much more interesting than white rice. Interesting is the right word in general, because it managed that rare trick of making sure there simply wasn’t a dull forkful – so much going on in the rice, with beans and petit pois adding a bit of crunch, leek for sweetness and little ribbons of piquant ginger running through the whole lot.

At first I thought the dish looked a little dry and that I might need to top up with the sauce bottles at the table, but digging deeper I got to the liquor, a wonderful sweet-salty mixture of teriyaki and broth that made every mouthful magnificent. If I was being critical it was warm rather than hot, but even having said that I could happily eat this every week for a year and never get bored. At little over a fiver it felt fairly priced for lunch and keenly priced for a light dinner, too. 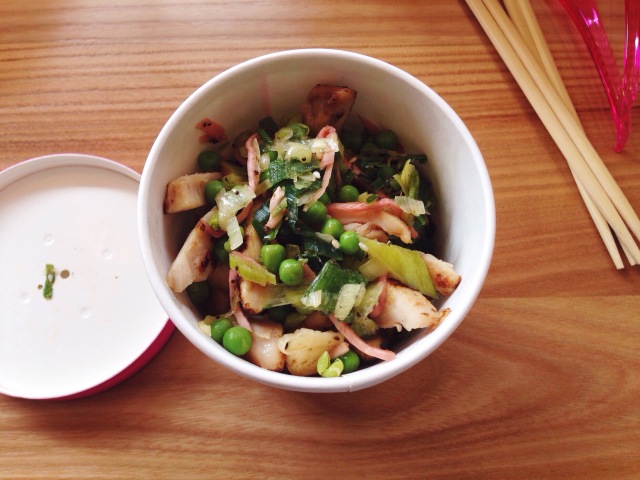 The sushi was less successful. An assorted pack of small maki – seven each of salmon and avocado – felt a bit clammy, claggy and unremarkable. I didn’t mind them, and at about four pounds fifty they clocked in very reasonably compared to Yo!, but they were difficult to get excited about (a shame, because I adore avocado maki). I nearly didn’t order them because I wasn’t sure how much they would tell me about the kitchen’s skills but as it turned out they were badly rolled, with most of the maki having gaps where the seaweed didn’t form a complete circle. 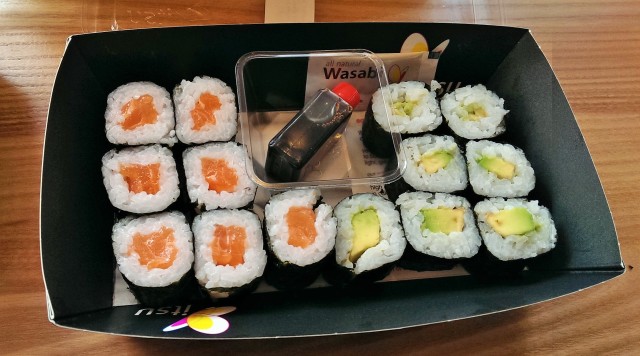 Prices in general are quite variable at Itsu, so although these were fairly competitive the sashimi and some of the bigger maki are priced outside the territory of a light lunch on the run. One of the salads I considered buying – a piece of rare salmon, some leaves and some dressing – was just shy of eight pounds, and I’m really not sure who out there is going to buy an eight pound salad from Itsu.

The other dish I ordered, to cover all bases, was vegetable dumplings on a bed of sushi rice. I quite liked the dumplings but quite liked is probably as far as it goes. They’d been steamed and then chilled, giving the outside a texture just the right side of cardboard, but the filling was decent enough. They were sprinkled with something that looked and tasted like togarashi which gave them a bit of oomph and the wee pot of teriyaki sauce on the side added savoury depth to the proceedings. It didn’t quite disguise that texture, but it did make them feel a bit less like a health food.

They came on a bed of rice, a thick layer of carbohydrates which didn’t remotely go and felt like hard work towards the end. You pay a quid extra to have this edible plate, and with hindsight I don’t think it was worth it. I did find myself thinking about Sapana Home, a hundred yards yet a whole world away, where you get a huge plate of freshly-assembled, freshly-cooked momo for only six pounds. I also worried about how many people would never discover Sapana Home because they never looked past Itsu’s snazzy exterior. 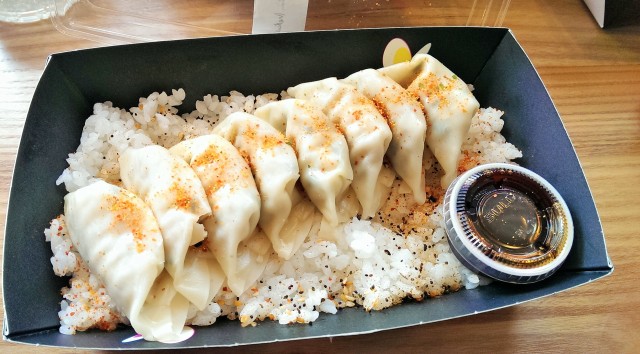 I couldn’t quite bring myself to order a “raw smoothie” for just under a fiver (perhaps I’m not cut out for this whole healthy eating caper, because I just found myself thinking I could get a pint of cider and a packet of Scampi Fries in the Allied for that), so instead we went for a couple of drinks from the fridge. Coconut and lime pressé, which isn’t made by Itsu, was light and refreshing, although I got more lime than coconut. The carrot and ginger juice drink (also known as “Detox iii”: what a horror movie that would be), which is made by Itsu, was pretty grim. I was expecting something like the terrific carrot and ginger juice you can get at Bill’s but this was a nasty, thin, watery pastiche of proper juice. Looking at the label I got a vague idea why: water was the single biggest ingredient in it. It also contained a mysterious substance described only as “Thorncroft detox cordial”, which sounds about as enjoyable as an hour stuck in a lift with Gwyneth Paltrow.

That sums up my problem with Itsu, because it doesn’t make healthy eating as fun as the happy-clappy blurb on the website and the pictures of people enjoying volleyball outside the shop suggest it will be. The staff are lovely, and my hot chicken teriyaki dish was beautiful – if I went back, it would be for more of that – but still something about the place jarred with me. Even the cans of Coke in the fridge are a mingey 250ml rather than the standard issue 330ml (drink them if you absolutely must seems to be the message). The meal for two, three dishes and two drinks, came to just over eighteen pounds, which feels like a lot for what we had, especially when you think how much of it was just rice. Also, I’m just not sure when I would eat here rather than spend less and go to a café or spend more and go to a restaurant. I have no doubt that Itsu will do extremely well – the crowds already suggest I’ve got this one completely wrong – but it left me really fancying a KitKat Chunky. Or some Frazzles. Or a chip butty. Something tells me that wasn’t their intention.