A more recent review of this restaurant exists, from July 2021. Click here to read it.

London Street Brasserie was almost the first restaurant reviewed for Edible Reading. In many ways it would have been the perfect choice, because it’s hard to imagine Reading without it. As Old Orleans has been replaced by Miller & Carter, as Ma Potter, Yellow River Café, Chili’s and Ha! Ha! have opened and shut and been replaced, it’s always been there, dragging the rest of the restaurant scene in Reading up in quality, year by year. It’s hard to believe that it only opened in 2000 (I had to check, and even then I did a bit of a double take).

It’s always done a roaring trade – not just locals, but also shoppers and the occasional celebrity, too. I don’t mean Paul Daniels and The Lovely Debbie McGee, either – apparently Prince Harry was there on Sunday night, mere hours after we’d checked it out at lunchtime, and rumour has it he very much enjoyed the crab (presumably he then dashed off to the casino next door, if past form is anything to go by). Even so, it feels remiss not to review it even if it is one of Reading’s most well known restaurants. After all, does that necessarily mean it’s any good?

The set menu at LSB has always been a good deal, so three of us went along for Sunday lunch with the very best of intentions. Three people, two courses, £16 a head: should be a bargain, right? Well. It always starts like that, but the problem is that then you have to have a quick look at the rest of the menu (the “here’s what you could have won” element of visiting a restaurant) and the next thing you know there is some complicated horse trading going on – I’ll have a starter off the set menu if I can have a main from the a la carte and what have you. So we wound up ordering a bit of everything, and convincing ourselves that it was for the good of the review.

The winner among the starters, in fact, was from the set menu: halloumi and rosemary with a rocket, peanut and mint salad. This was the one we all wished we’d ordered – the salty halloumi set off perfectly by the mint, not a combination any of us had tried before. The others, though, were less successful. The foie gras ballotine seemed in some places to be more butter than foie gras (some of which had started to melt, possibly because it had been left out too long), and lacked any real complexity. The Sauternes sultanas accompanying it were little unremarkable sugary pellets and the cocoa nibs added more texture than taste. Each section of ballotine was topped with an inadequate triangle of toasted brioche, and the whole thing was a little underwhelming. At just under a tenner, it was disappointing stuff – you can argue about whether foie gras is cruel or a delicious necessary evil, but one thing it should never be is empty calories, and this came rather close to that. 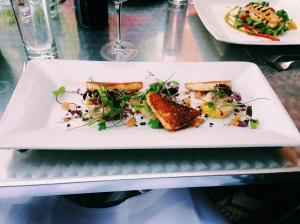 The Parma ham with artichoke and parsley salad, also on the set menu, might have been even less exciting – the ham, despite being air dried, was somehow smooth, wet and fatty and the accompanying artichoke and parsley salad, with finely chopped red and yellow peppers wasn’t anything to write home about. Having used up a large part of my adjective quota on the foie gras, let’s just use one – boring – for this and leave it at that. 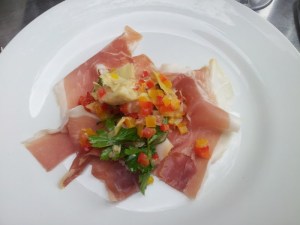 The mains, happily, were a much better bunch. The fish and chips was a generously sized piece of haddock with a perfect, light crispy batter, along with chips served in one of those little frying baskets that seem to be all the rage at the moment (and which are very popular with me too, as they’re very easy to steal from). The mushy peas must have been good because I didn’t get to try any – you try stealing mushy peas without being spotted some time. The tiny jars of fresh sauces (a red pepper ketchup and tartare sauce) were a nice touch, though the vinegar came in a faddish bottle too, and personally I don’t see what’s wrong with a proper shaker.

The Tuscan venison ragu with pappardelle was also very nice, or at least it was when it came out second time around; first time round the ragu was aspiring to warm, although it never quite got there. We did the English thing of apologising for being given lukewarm food and the waiter did the equally English thing of not really apologising but sending it back to the kitchen.  When the replacement arrived – fortunately quite quickly – it was delicious; rich, intense, just the right size, and the pine nuts studded through the pappardelle were also an interesting surprise. I was a bit dubious about the self-assembly element of this – you are brought a bowl of naked pasta and a small saucepan of ragu and left to put it together yourself. Maybe some diners quite like being involved in the process, but I thought plating up really should be the kitchen’s job. 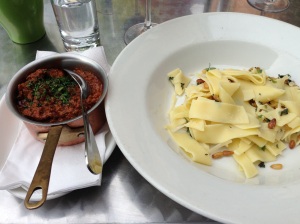 My main, garlic and sage marinated monkfish, was lovely. Three mini fillets of monkfish served with sweet potatoes, cabbage and a red wine jus. It sounds simple but it was definitely more than the sum of its parts. It was really delicious – quite light and compact but not stingy which is quite a challenge with an expensive ingredient like monkfish.

All this was washed down by two bottles of the Surani Costarossa, a primitivo at a very primitive £27.50 a bottle. The second bottle was a little harder work than the first but we’d already had a aperitif in the bar so things were starting to reach the stage where restraint is a wonderful, if somewhat distant, concept. By this point, the sun had come round to the terrace and a few more barges had gone past so it seemed a shame to leave our table (although naturally, if we’d known Prince Harry would turn up in a few hours maybe we’d have taken things a bit more slowly). So we finished our red in the mellow afternoon sun and looked at the dessert menu, because it never does any harm to look.

The desserts on the set menu are a fiver each, a quid or two less than those on the a la carte, so we decided to look at both menus and pick what we fancied. I had the sticky toffee pudding, from the set. So indulgent (although my main was on the lighter side so I felt I could get away with it): a simple square of moist suet pudding, served in a glorious little lake of butterscotch sauce with a quenelle of clotted cream to cut through the sweetness a little. Just divine; done well, nothing fancy, thank you very much. The caramelised lemon tart with stem ginger ice cream appeared on my left, and I’m told it was lovely but I never got to try it. I was told, between mouthfuls, that the caramelised topping in particular was a big hit.

The showpiece dessert, however, was the orange and Grand Marnier soufflé with hot chocolate sauce. A full inch taller than the soufflé dish, this had more fluff on top than Donald Trump in a windstorm. It looked magnificent, but like Donald Trump what lay beneath didn’t quite live up to the impressive topping – undercooked to the point of being damp, it didn’t quite feel right. On the other hand, once the dark chocolate sauce got poured in, the whole thing transformed into a big edible puddle and apparently it stopped mattering so much after that. Of course, that might also have been to do with the bottle of dessert wine we’d ordered. I’m a little ashamed to admit that we washed them down with a bottle of Tokaji (5 puttanyos for those who know their wine) which was incredible, even if it probably contained enough sugar to be a dessert on its own. At £42 a bottle it really isn’t cheap, though in fairness the mark-up on it isn’t unreasonable. 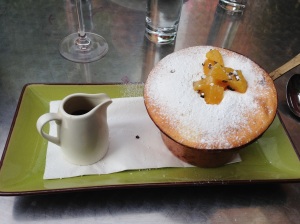 The dessert wine didn’t turn up until after the desserts had arrived, and we needed to give the waiter a nudge for it. Service was a bit like that all afternoon – slightly hit and miss but always cheekily apologetic, as if they’d been caught winging it. The whole thing was slightly reminiscent of people at work (and every office has one) who rely heavily on their charm to make sure they’re never quite found out for not delivering things. On a Sunday afternoon, a few bottles of wine to the good, with the sun on the terrace and the barges floating past on the canal, this was all fine, but with hindsight it could have and probably should have been a little sharper.

So, it’s been a staple of the Reading restaurant scene since the turn of the century, Prince Harry eats there and it’s always packed, but is it any good? Well, as you can probably tell from the above, the answer – frustratingly – is yes and no. But over the years I keep coming back here. The food is hit and miss, and so is the service – not all of the waiting staff have the finesse that the food deserves – but the riverside setting, the buzz and the sheer range of the dishes (especially on the set menu which I think was a much better deal on the day) mean that it has enough interesting things going on to make me return. Carried away by the summer and the sheer recklessness of exploring the menu our bill for three, for three courses, three aperitifs and three – yes, three – bottles of wine came to £195, but I would say do as I say not as I do, go for lunch or an early evening meal and it’s still a decent place to eat. In 2000 LSB was head and shoulders ahead of almost everywhere else you could eat in Reading. In 2013, it should maybe be a bit less confident about retaining that status.