N.B. The Warwick reopened as Bali Lounge in Jan/Feb 2015 with a slightly different emphasis and a different, shorter menu. Bali Lounge itself closed in early 2018. I’ve left the review up for posterity.

First the bad news; as much as I wanted to like The Warwick there were a few hurdles to get over.

The decor is pleasing to the eye, with lots of Buddhas (is that the plural of Buddha? Buddhae?) and Ganeshes (likewise) dotted about the place. The lighting is muted (you’ll be able to see that from the photos) with fairy lights strung around the windows and signage which give it a romantic feel. Sadly, though, the furniture is an odd mish-mash of things; they’re all in keeping but the variation from hard wooden rustic style chairs (which, worryingly, all sway slightly when pushed) to fully upholstered dining chairs means that there are definitely good and bad places to sit, which means good and bad tables.

Actually, I suspect they’re all bad tables, just in different ways: we started at a table where you could see what you were eating, but moved because we were sitting on rock hard yet rickety chairs and I don’t think my bum could have coped with two hours of that. We moved to a different kind of bad table; better chairs, but atmospherically lit at best and, because the table was so low, we struggled to fit our legs under the table. Never mind. We’re British, dagnabbit, so we stayed put. You can ask to move tables once and you get away with it, do it twice and you run the risk of having a foam added to your meal where no foam should be.

Another hurdle: I don’t think wine is really the Warwick’s thing. We ordered a bottle of Albarino. The bottle was coated in a fine layer of condensation and the felt cold to the touch but when poured the wine was just not cold enough. This was tricky to explain to the waiting staff who didn’t quite understand what the problem was – not in itself an encouraging sign. A friend of mine reported a similar experience when she ate there recently – which they tried (and failed) to rectify by chucking ice in the wine cooler. Maybe their fridge just isn’t turned up high enough (or low enough, depending on which way you look at it). A second bottle of Albarino felt no colder, so we turned it down and said we’d order a red instead. They were so baffled at why this wasn’t acceptable that I almost felt guilty, even though they were the ones at fault.

The red was a bottle of Fleurie – it was okay at twenty-four quid but not exceptional, and it didn’t have quite the light fruitiness I associate with Fleurie. Even ordering this was plain weird – they brought the bottle over, showed it to us and then wandered off to remove the cork out of sight. When it came back, the waitress poured some into my glass. I kept waiting, expectantly, for her to stop so I could taste it, but she just filled it right to the top and then proceeded to fill the other glass. Again, I felt like I was the one who looked stupid, even though I knew I wasn’t.

Now comes the good news. The food. We went for the Island Spice starter platter which is your usual fare – the ubiquitous fish cakes, satay chicken (out of sight in this photo), a breaded prawn and a spring roll each. Yes, I know it’s poor. I know I should have opted for a more interesting, more authentic dish rather than this greatest hits package and yet I always seem to do this in a Thai restaurant. It’s like the Quality Street of ordering – you know what you’re getting, there’s some variety, and you can always swap the culinary equivalent of the coffee cream (the Thai fish cake, in my case) with somebody else. Besides, it was only £5.50 a head, the same price as most single dishes on the starter menu. 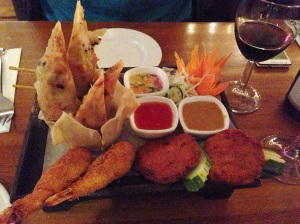 Actually, as it happened, this selection box had no coffee creams in it and my fish cake remained untraded. Normally I find them a bit floppy and tasteless but this one was very fragrant, lightly spiced and spongy rather than bland and flaccid. The prawns were unrealistically huge (split, I think) with a thick coating of breadcrumbs but they were tasty enough, especially once dipped in some sweet chilli sauce. The satay was proper chicken rather than something which had been “chopped and shaped” or (the horror) “formed” and the spring rolls were fabulous – proper fresh tasting shredded vegetables, including red and white cabbage, in a crispy layer of pastry. These in particular were the biggest hit of the selection – and I say that as someone who will often refuse to order a dish without meat in it. In hindsight, the Quality Street analogy maybe sold it a bit short.

The Warwick does a lot of main courses – stir fries, curries, pad thai dishes and house specialities. There’s even a separate regional section, all of which have a three or four chilli rating – the menu rates all its dishes from “a little spicy” to “ouch! my mouth is on fire” or words to that effect, which I found so endearing that it almost made up for the use of Comic Sans. To compensate for the obvious choice of starters, we decided to steer clear of the usual massaman lamb or green thai curry and try something a bit more interesting.

The ped makarm – crispy duck with sweet herbs and a sweet tamarind sauce – was a revelation. I rarely order duck in restaurants, because I’ve never been a fan of pink pan fried duck with that thick layer of wobbly fat on top. But there aren’t many pairs of words more beautiful than “crispy duck”, so I took the plunge. What’s not to like? This came on a little bed of broccoli (tasteless, but I think it was just there to prop up the duck) in a pool of rich, dark tamarind sauce with a few cashews sprinkled on top. And the gamble paid off, because it was magnificent. So many gambles in restaurants don’t – we all have experiences where you stray from your usual thing and are rewarded by a truly middling meal – but there’s something magical about picking something you wouldn’t normally order and having your socks knocked off. 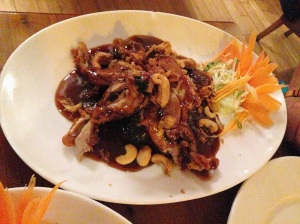 The other main dish was sea bass with stir fried garlic, coriander root and oyster sauce (kra tiem prig thai). Again, it was spot on. Two generous sea bass fillets, fried until crispy, skin and all, served with a rich sauce that honked of garlic (I pity the people at the desks next to us at work the following morning, put it that way). The only drawback, which I guess I should have appreciated, is that although you get a reasonable amount of sauce it’s never going to be quite as saucy as a Thai curry. The delicious bit at the end of a Thai meal, where all you’re left with is coconut rice soaked in rich sauce, was not to be a feature in our evening.

The side dishes were good but not amazing, but they really weren’t the feature attraction, so it didn’t matter. Coconut rice was nice but unremarkable. The vegetarian pad thai, with cabbage and (yet more) tamarind sauce was better – fine noodles, tasty sauce and delicious cabbage, but it was a bit pricey at seven pounds. The Warwick doesn’t treat vegetarians all that well, I thought: the vegetarian dishes all hover around the seven pound mark (broccoli in oyster sauce for about seven pounds felt especially stiff). The mains we ordered were both £12.50, though there are plenty of dishes that are considerably cheaper than that.

I’ve said the ambience is a tad romantic, but really this feels like a place to go with friends. They have a number of different set menus for two or more people giving you the opportunity to try loads of different things, and that’s what this kind of food should be about (they also do daily offers ranging from buy one get one free to a free bottle of house wine with some of their set menus). Even with just the two of us, it was one of those meals where you want your dining companion to taste your food, so they can do that nod and point thing where something you’ve picked is really good.

As it was, there was lots of swapping and sharing, though I did have to put my foot down when I offered my companion an extra piece of duck and his fork hovered towards the super crispy shard of duck that I had been saving for the last mouthful (I’m nice but not that nice). And I was right to save it – so salty and crispy but offset by the sweet tamarind sauce. Yes, I know I’m repeating myself but there’s something about constructing the perfect final mouthful when you go out for dinner, and it was so, so good.

We skipped dessert, partly because we had no room and partly because the dessert menu was pub food not Thai food – chocolate brownies, sticky toffee pudding and the like (although possibly preferable to the frozen delights you often get in Thai restaurants – who can forget the dubious pleasures of the “Funky Pie” at Thai Corner?). Instead we finished up the wine, got the bill – £69 for two courses and a bottle of half decent red – paid up and left. If it looks expensive, it probably is – it’s possible to eat a lot cheaper there, and based on what I had you’d probably eat very well.

All in all, The Warwick is a mixed bag. You do feel like you’re eating somewhere that isn’t quite a pub, isn’t quite a restaurant. The furniture isn’t inviting. The service is a bit unpolished – probably partly because they were doing a brisk trade, even on a Wednesday night – but it did feel like a struggle at times. It’s on the edge of town, in a town that has a fair few other Thai restaurants (though not as many as it did before Thai Nine closed down). And yet, and yet… when I think back to that duck dish, it becomes an awfully hard place not to like. Even before I’d left a part of me was wondering what I’d choose next time, and that tells its own story. So I’d say go with friends, order carefully, don’t expect to be too comfortable (or if you are, don’t expect to get a good look at your food) and you should have a very enjoyable meal indeed.

Oh, and probably best to stick to the beer.

5 thoughts on “The Warwick”