One thing restaurant bloggers often get criticised for is their obsession with the new. You especially see this in London, where new restaurants open all the time. It’s partly because some bloggers get invited to soft openings (a phrase which sounds wrong – wrong on paper, wrong in my head) and partly because it’s too difficult not to in a city where there is always a new trend to embrace or a new cuisine to explore. I can understand how seductive that must be, and here in Reading I can’t help but feel a pang of envy. Reading gets a handful of new restaurants every year. Edible Reading publishes a weekly review, and if I only visited places that had just opened I’d run out of material before you’d finished your leftover turkey and broken your first resolution of 2014.

But also, I don’t believe in it. I like to give places a chance to settle down and bed in, to iron out inconsistencies, for the kitchen and the front of house to gel. I wasn’t always like that – I remember going to Brown’s just after it opened and sitting upstairs, with no natural light while the waiter stumbled over his words and my feet and my forgettable food arrived, was eaten and forgotten. It might be brilliant now, but I’ve never gone back.

On paper, this week’s review should be of the Queen’s Head, the revamped pub on Christchurch Green. It used to be called the Nob, was full of students and was skanky, scruffy and the home to a few of my disgraceful Saturday nights a long time ago. It’s just been done up by Spirit House, who also own the Warwick and the Moderation and have realised that students don’t buy food whereas the people in the gorgeous roads around Christchurch Green (I personally daydream about living on New Road) probably will. I went, and I quite enjoyed my meal, but when push came to shove, I couldn’t review it. So instead, I went to its daddy (or perhaps uncle), the Moderation, this week with a couple of friends.

The Moderation also used to be a grim boozer but you wouldn’t know that now. Refurbished, it’s a handsome building from the outside, slightly incongruous so close to the curry houses, kebab joints, little hotels and undertakers of the Caversham Road (not to mention “Papa Gee”, a strange little Italian restaurant I’ve walked past dozens of times without spotting a single diner). Inside, it was buzzing and all sorts of groups were there, from raucous parties to small gatherings of friends to what looked suspiciously like dates. We were lucky to get a table, which on a school night in a location out of town is no mean feat.

The Moderation’s menu is a funny mix of food. Indonesian, Malaysian and Thai food rubs shoulders with classic pub food, pork belly and black pudding juxtaposed with nasi goreng. I like that range, but it raises a bit of a concern too: could it be equally good at both, or was one what they truly loved and the other something they put on to attract a wider range of punters? I resolved to find out, or get uncomfortably full in the attempt.

We began with the time-honoured sharing platter of mixed starters: I know, so unimaginative. We should have picked three different dishes, and if I went again I would, but the variety was too hard to resist (looking back I’m ashamed to remember that when I reviewed the Warwick, the Moderation’s sister pub, I also went for the mixed starters; I think I’ve let you down.)

It was, in fairness, a good choice and also gave a reasonable idea that the kitchen could handle both east and west. The spring rolls were delicately spiced and eminently dippable, subtly different from those at the Warwick but equally good. The salt and pepper squid, though not quite up to the standard of somewhere like London Street Brasserie, was tasty and avoided the worst fate of all, that of rubberiness (though I’d have liked more crispiness). The prawn crackers were inoffensive and probably not worth the sentence I’ve just given them. The chicken satay was, again, better than the Warwick I thought – a skewer of tender flesh and a gorgeous chunky satay sauce to slather over it.

The most interesting of the starters was the kedgeree arancini – balls of smoked haddock risotto breaded and fried with half a hard-boiled quail’s egg pinned to them, a little dab of curried mayonnaise on top. I loved this; sophisticated party food, and cleverer than all the other staples (no doubt next year Jason Donovan will be wandering past with a tray full of them in the ad breaks on I’m A Celebrity).

The wine list, though not enormous, had enough to keep us occupied. The sauvignon blanc was decently fresh and easy to drink and the chianti was fruity without being inoffensive and peppery without being brutish. The advantage of having dinner in a pub is that if you go out for a meal with someone who likes beer there’s something for them too; I’m told the Black Sheep was very nice, although my friend had it in a shandy, and even I know that means she probably wasn’t qualified to judge.

Initially I tried to order a 125ml glass of wine, but the waiter turned up with what looked suspiciously like 175ml. I was about to quibble when he said “It’s the same price for 125ml, so I brought you a bigger glass. Leave some if you like”. I liked that; I’ve been to places where they would have brought the smaller glass and trousered the cash, so it was nice to be told. Service was like that in general – a tad brusque (they were busy all night, in their defence) but helpful and prompt. Considering how much they had going on, and the size of some of the other tables, I was impressed to get served at all.

For the mains we decided to give both halves of the Moderation’s menu a chance. In the red corner, representing pub food, was a mutton and onion suet pudding with mashed potato and roast root veg. It was nowhere near perfect, but just close enough to it that I could have wept. The jus that came with it was rich, the soft sticky roasted carrots and parsnips were delicious, and the sauce inside the pudding was a cracking jumble of slightly sweet onion and tangy tomato. But the errors were glaring. The mash had big chunks of what felt like uncooked spud lurking in it. The suet pastry didn’t have the slightly soggy, gooey feel I was looking for and, if anything, was more like a pie in pudding’s clothing.

Most unforgivably, the mutton was undercooked and unappealing – bouncy in places, sinewy in others. None of it fell apart under the fork the way it should have done, and most of it resisted a knife in a way it really shouldn’t have. The moment the first chunk twanged under my molars I knew the rest of the meal would be spent prodding and chopping, when a meal dish this should be about scoffing with carefree, reckless abandon. The gulf between what you think you’re getting and what you end up with has rarely felt so cruel, or so huge. 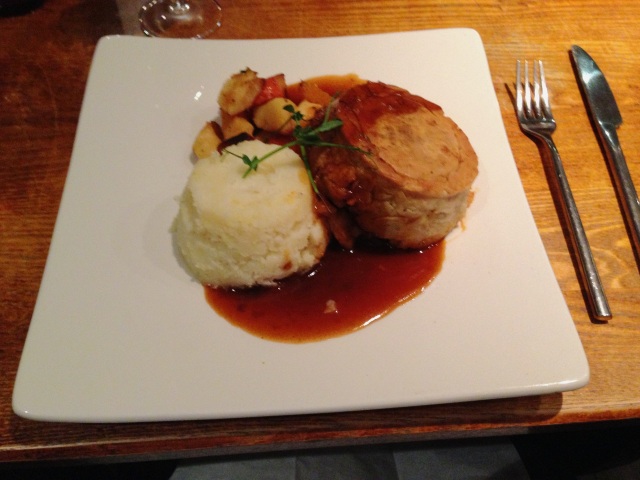 The beef rendang, in the blue corner, suggested that I’d have been better off sticking to the eastern half of the menu. This was a bowl of beef in a rich, spicy coconut sauce with enough of a kick to balance out the creaminess but not so much that your lips tingled. On the side was a dome of white rice and a couple of those decent enough prawn crackers which have now taken up an undeserved sentence and a half of this review. All good, you might think, and it almost was, but for one thing: the beef had the same problem as the mutton. The first few mouthfuls were properly boast-to-your-friends-good, but then followed a piece of beef the consistency of jelly that made me swallow quickly to avoid having to come to terms with the texture. Such a shame that such a great dish can be ruined by only a few chunks of beef, but there you have it: if only the kitchen had been a little pickier about the pieces of meat that went in the dish versus what went in the bin (or cooked it for longer, or both). 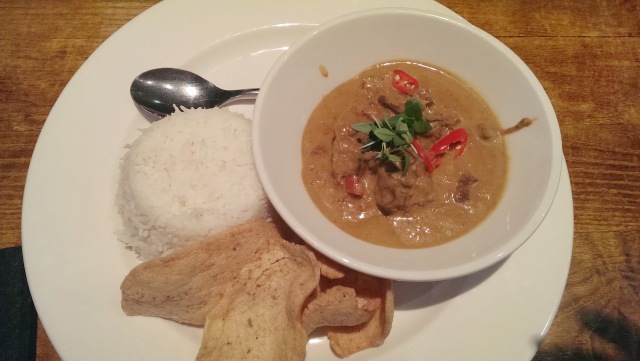 We skipped dessert and dinner for three people, including three drinks each, came to a fairly reasonable £83.

Another reason to envy bloggers who only go to restaurants just after they’ve opened is that it’s easier to review those places because you have no preconceptions. You can compare them to other, similar restaurants but that’s as far as you can go because ultimately, you’ve only visited that restaurant once. I on the other hand have been to the Moderation many times before and always really enjoyed it. And I so wanted them to have a good night the night I visited on duty, because what they do in Reading isn’t quite like any other independent and it’s admirable that they are expanding, albeit slowly, and rolling out a set of attractive pubs across Reading where you can drink nice wine or (I’m told) good beer and eat interesting, inexpensive food.

I want to rate them well for that, and for being brave enough to try something different, and I’d like people to go there and order the nasi goreng, which I happen to know they do really well. But, on another level, I can only review the meal I had on the night I went and, on that basis, it just wasn’t up to scratch. So it gets the rating it gets, and a suggestion from me to approach with caution. I know that might seem a bit harsh, but that’s the way the meat bounces.

5 thoughts on “The Moderation”