This week’s review was meant to be of Kei’s, the Chinese restaurant in Lower Earley. I took the bus, past streets called things like Parsley Drive and Clove Close (it must be hard to be inspired when you have to name so many streets; back in the day it was the largest housing development in Europe) and reached the restaurant only to find that we’d been given the only table left. By the door. With the spotlight overhead gone. In pitch blackness.

Were there no other tables, we asked. Apparently not. Could they do anything about it? After some shaking of heads, a waitress returned with an ineffective-looking candle that had seen better days. And I, I’m afraid to say, turned round and left. I’ve been sat at many tables so awful that I’ve asked to move, and some so bad that I’ve accepted them reluctantly and complained all night, but only one so terrible that I refused to sit there at all, and that was the one at Kei’s. It was hardly a table at all, more a badly-lit symbol of their determination to make money out of two extra diners. So never mind, Kei’s. Maybe another time.

Instead, the following night I went to the Pack Horse at Mapledurham and something very similar happened.

This time, it was the opposite problem. The spotlight was working – too well, which meant that the person in one of the seats looked like they were competing on Who Wants To Be A Millionaire? (picking a main course is difficult, but never that difficult). We asked if we could be moved. It shouldn’t have been a problem; there were loads of vacant tables for two.

“I’m sorry, those tables are reserved.” said the waitress, casually dressed in what might have been a dress or just a very long t-shirt.

“This table was reserved too. And they’re not here yet anyway. Can’t you just swap them over?”

This was apparently a very difficult question (I didn’t realise at this stage but that was the shape of things to come from the service at the Pack Horse) but after much deliberation she moved us. Our reservation was at 8, the table they swapped was at 7.30. They never turned up. The table next to us was reserved from 7, and they never turned up either. I can only imagine that some people in Mapledurham have invented a time machine, travelled into the future and read this review.

Before that it all looked promising. The Pack Horse is a gorgeous pub on the A4074, about fifteen minutes out of Reading. The main bar is all beautiful wooden beams and brass over the fireplace, snug and cosy. The wine list has a default glass size of 125ml, and everything is attractively priced, encouraging you to drink as many different things as possible. The dining room is handsome, even if the tables are a little bit too small for two. But from the moment we took our seats, nothing else went right.

We started with some rustic bread, butter and rosemary oil, although we needed to order this twice before it actually turned up. It was unremarkable – the butter was unsalted and only just soft enough to spread, the bread heavy and hard work (maybe this is what “rustic” means). Only the oil was worth the trouble – sharp, fresh and green with a good whack of flavour from the rosemary. The bread came on a board big enough that they had to remove our pointless place mats; that’s how small the table was.

Our starters arrived about two minutes after the bread, another warning sign. What was called spiced lamb faggots with chick peas and tomato stew on the menu was a job for Trading Standards. Faggots should be big, coarse, earthy things; these were three tiny meatballs, with no spice in them. The chickpea and tomato stew was all chopped tomato and very little chick pea. I wanted a hearty bowl of food but instead I got a needlessly cheffy oblong plate with three puddles of underwhelming tomato on it, each topped with a minuscule sphere of meat-flavoured indifference. On top of each of those was a piece of deep fried pitta bread, for reasons which escape me. Worst of all, though, the whole thing was lukewarm. By the time I’d finished it, so was I.

Fig and thyme tarte tatin with goats cheese, pickled walnut, radish and pea shoot salad was equally misleading, so much so that I thought I had misread the menu. What I actually got was a goats cheese tart with a couple of big slices of pickled walnut on top. There was no thyme that I could detect, and no fig either. It was all salt and vinegar and no sweetness to offset it all (unless you count the drizzle of generic red jam around the edge of the plate: I don’t). The radish and pea shoot salad was just a nest of pea shoots, no sign of the radish. When I read the menu at the Pack Horse it was so huge that I had reservations about whether they could cook it all. It turns out they couldn’t: perhaps they had run out of some of the ingredients, or maybe the way they cook those dishes has evolved over time. The wording on the menu certainly hasn’t, though, and either way I felt short changed.

In a good restaurant, the starter makes you feel excited: I can’t wait to see what my main is like. At the Pack Horse, it was quite the opposite. I found myself wishing we’d ordered more straightforward mains, dishes a kitchen couldn’t mess up. As they took the starters away I ordered another glass of wine and we took bets on how quickly the mains would turn up; after all, everything so far had been so disappointing that surely this was the logical next step (one of us guessed five minutes, the other ten).

Our mains arrived roughly ten minutes later, both of them slouching towards mediocrity and barely getting there. The braised shoulder of lamb was like a bad cover version of kleftiko where you could make out the words but the melody was all wrong. It wasn’t quite cooked well enough or long enough, so bits of it fell apart but most of it was a struggle against wobbliness, and I do enough of that already. The rosemary jus was thin, watery and flavourless. The dauphinoise potato managed to be sinful without being any fun – all cream and no seasoning, the worst kind of empty calories. The spring vegetables had an air of supermarket stir fry about them. All in all, it was a depressing way to spend sixteen pounds – not inedible by any means, but stirring up bittersweet memories of this kind of thing done far better pretty much anywhere else.

The roasted cod with chorizo, tomato and white bean stew and basil lemon pesto dressing was equally uninspiring. The cod itself was a decent sized chunk, well cooked but also underseasoned. I was expecting the stew to be a hearty bean-filled affair but it seemed to be the twin of the tomato stew from the faggot starter, with a few small chunks of chorizo and beans added in. It had a little hint of chilli but not enough to make it interesting. On top of the cod was yet another nest of pea shoots and a single slice of chorizo, cooked until it resembled a tax disc holder. I tried to eat some, for the record, but gave it up as a bad job. There was a drizzle of pesto round the edge of the plate, cheffy style again, but it didn’t stand a chance against the chilli tomato stew so I can’t tell you if it was lemony or basilly, or if those are even real words. There was also some random fennel, so little that you couldn’t tell if it was deliberate. 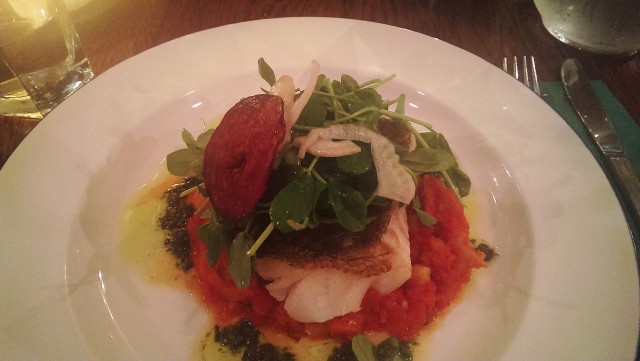 The final insult was twofold. First of all, they left our plates in front of us for well over ten minutes after we’d finished eating. Having to look at couple of plates with the leftovers of a disappointing meal, for that long, is almost as bad as having to eat it in the first place. We figured out that it took roughly as long to get rid of those plates as it had to bring them to our table. The irony: so quick to take our order, so quick to bring our starters, so quick to bring our mains. And yet the one time you actually want the serving staff to get their skates on they couldn’t be found for love nor money. It was the only slow element of the entire evening: from taking our seats to finishing our main courses took under an hour.

Better still, a waiter then came over with the glass of wine I’d ordered when they took our starters away. (Had you forgotten about that? You’re not alone: so had they.)

The waiter put the glass of wine on the table. There was no obvious sign of a hearing aid.

He shambled off with the wine glass, without saying a word. They still billed us for it, mind you, and we had to ask to get it taken off the bill. The bill, for two people, for bread, two starters, two mains and a total of five drinks, came to £63. We didn’t stay for dessert, because I had some chocolate in the fridge at home and a pretty good idea that they weren’t going to manage anything half as tasty as that. Service wasn’t included, and I didn’t tip; I think failing to tip, by and large, is deplorable but on this occasion there was literally nothing to reward. The waiting staff were there when you didn’t want them, nowhere to be seen when you did, knew little about the food and, with the exception of the literal, brought nothing to the table.

You’ll notice that I haven’t talked in detail about the wine, and there’s a reason for that: it wasn’t good enough to justify going to the Pack Horse. It wouldn’t have been even if they were selling magnums of Margaux for a tenner.

What I’ve realised, over the past six months, is that Saturday nights seem to be cursed for me. I went to Picasso on a Saturday night, and the Lobster Room, and in the Pack Horse the curse of Saturday night seems to have struck again. It’s an absolutely beautiful pub, but the menu is all wrong. They should either live up to the promise of those surroundings and cook skilful, imaginative food, or stick to a small menu of tried and tested pub classics. What they’ve done is neither: the food here isn’t actively bad, but it’s possibly even worse than that – a mediocre photocopy of good food, a menu which makes all the right noises ruined by execution which is totally out of tune.

The perfect punchline only came later when I was writing this review: I found out on the Internet that the pub used to be part of the Blubeckers chain, before they were subsumed into something called “Home Counties Pub Restaurants”. I went to a Blubeckers a few times – it was cheap, cheerful and nothing to write home about, a Harvester with ideas above its station. And yet, thinking about the meal I’d had at the Pack Horse it managed something I wouldn’t have thought possible: it made me nostalgic for Blubeckers. Any restaurant that can do that really isn’t much of a restaurant.

10 thoughts on “The Pack Horse, Mapledurham”