Planning which restaurants to review involves considerable deliberation here at ER HQ. Imagine me with a little rake pushing figurines round a map of Reading (and wearing a tricorn hat! I must buy a tricorn hat) and you wouldn’t be far from the truth. Should I review a pub this week? An Indian restaurant? A lunch place? Somewhere cheap, somewhere fancy? Time to go out of town?

This week’s review was meant to be of a pub. First I was going to review the Queen’s Head, but I checked the menu and it was exactly the same as the Moderation’s, which I’ve already reviewed, and I didn’t think a review which said “I went out of my way to have different things to last time but, you know, it’s pretty much the same” would excite anyone. Then I was going to review the Lyndhurst, but the menu didn’t inspire me (there’s something about the word goujon, and the way it’s used by English pubs, that undermines all the gastronomic beauty of the French language) and nor did the rather surly welcome behind the bar. So anyway, it was meant to be a pub this week but no dice: instead you get Pappadams.

Pappadams is a little place down the King’s Road, after the library but before you get to the architectural wonder that is King’s Point. It’s a small room which can’t seat more than thirty people, although there’s another bigger room upstairs (“we’ve got the World Cup on up there if you want to watch”, the waiter told us conspiratorially; it didn’t lure me up there). It’s handsome enough, if basic – square tables, nice comfy chairs, cloth napkins – with the huge glass front covered with a beaded curtain so you don’t feel like you’re eating in a goldfish bowl. When I got there on a Tuesday evening it was about half-full – mostly with Indian couples and friends.

I wouldn’t know a South Indian dish from a North Indian dish from an anglicised Indian dish, but the waiter was excellent at navigating us through the options and offering lots of advice, particularly on some of the Keralan specialities on offer. I found the menu quite endearing, with sections marked “from our fisherman’s net”, “from our vegetable garden” and “from our butcher’s farm” (a butcher and a farmer, I guess that’s one way of cutting out the middle man). The dishes are rated on the time-honoured chilli scale, although eccentrically things are either rated with zero, two, three or four chillies (only one dish, “Lamb Dragon” had four chillies – it sounds more like a masterpiece of genetic engineering than an actual main course, or maybe it’s both).

Starters were delicious although I couldn’t shake the feeling, maybe as a result of reviewing other Indian restaurants, that I’d had the same kind of things ever so slightly better elsewhere. Paneer shashlik was lovely, big squares of cheese, charred and chewy around the edges, sizzling on a plate with peppers and onions. The lamb tikka was less successful: the flavour was perfect, deep and intense, soaking into the sizzling onions underneath, but the texture was more tough than tender, requiring a lot more cutting and a little more chewing than I’d hoped. 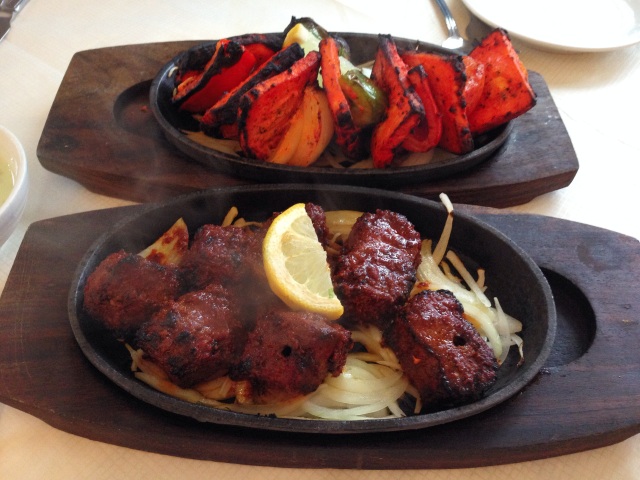 After we finished our starters, something happened which happens very rarely in Reading restaurants. The waiter came back, asked if we’d enjoyed our dishes and asked how long we wanted to wait before the kitchen started cooking our mains. Why don’t more restaurants do this? I’ve lost count of the number of times my main arrives hot on the heels of my starter, leaving me with half a bottle of wine to polish off while telling waiters, with an increasingly rictus grin, that yes, I would like dessert but no, I don’t plan to order it until I’ve the rest of the wine in front of me, wine that was only there because they’d been in such a hurry to feed me. Even if Pappadams didn’t get brownie points from me for anything else, they’d get some for that alone. Service was excellent throughout. Early on I was asked if we’d like to move across to a bigger, better, freshly vacated table – another thing not enough waiters consider. They may not have won me over by inviting me to watch the nil-nil draw in the Mexico-Brazil match, but otherwise they didn’t put a foot wrong.

Mains were, well, divisive. We took advice from the waiter and went for two Keralan specialities. Fish mappas was an anonymous white fish (I’d put my money on tilapia, but not with any great confidence) in a sauce of coconut milk dotted with nigella seeds. I liked the sauce – so different from a Thai sauce, lacking that slightly cloying sweetness they can sometimes have – but the fish wasn’t for me. I like my fish to be firm, to flake, to have a little give but not too much. This was softer and mushier than I personally like it, but that might be a matter of personal taste. It all got finished, but that was more to do with the person opposite me.

The other dish, cochin kozhi curry, was even more divisive because I couldn’t quite decide whether I loved it or just liked it. A chicken dish, this too was made with coconut, although the sauce couldn’t have been much more different to the sauce that came with the fish. It was dark where the other was light, thicker and stickier where the other was more liquid. It had proper smokiness (almost with those notes of leather Jilly Goolden has spent a career trying to kid us into thinking she can spot in a glass of Rioja) and lots of clever aromatic flavours that came through a little further on. But here’s the problem: it was really, really salty. I could just about manage it (although it did cause me to gulp my mango lassi towards the end) but I can imagine other people would be put off by it. The chicken, unlike the fish, had the texture just right: putting up just enough fight and then falling apart under a fork. Both mains felt a little mean on the meat to sauce ratio, with a big bowl of sauce left over at the end after time spent fishing for the meat. 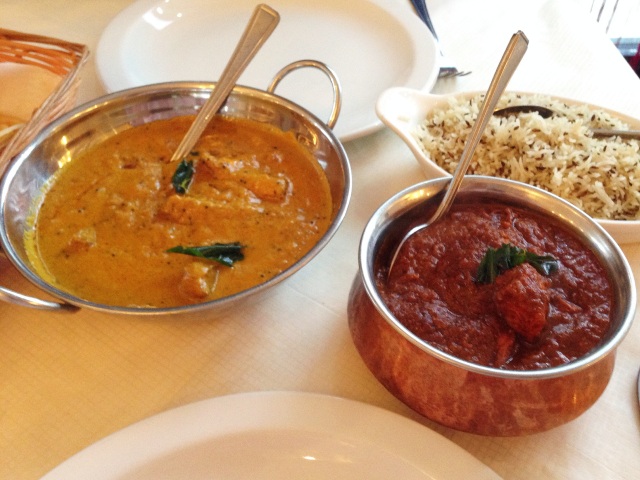 The side dishes were unremarkable. Rice with cumin was a little bland (although, compared to those sauces, most things would have been) and the paratha was thick and heavy compared to others I’ve devoured in recent months. Like so much of what I had that evening it was good, but I was left remembering that I’ve had better.

Where I’ve not had worse for a while was the wine. The house red was perfectly decent (no notes of leather – even Jilly Goolden would have struggled to locate them, I imagine). The white, on the other hand tasted slightly peculiar and not especially like wine (an achievement, I know). If I’d opened the bottle at home I would have poured it down the sink and I’ve rarely had wine that bad in a restaurant. After that we switched to other drinks – Cobra and mango lassi, more reliable staples. The lassi came with pistachio crumbled on top – a lovely touch, I thought. We didn’t stop for dessert (too full for gulab jamun, this time at least) and the whole thing came to just under £50, not including tip.

I feel for Pappadams. If you picked it up and plonked it in any of a dozen other towns it might well be the best Indian restaurant there. It just has the misfortune to be down the road from House Of Flavours and in the same town as Bhoj, and it strikes me as caught a little between the two. The prices and the décor are more like Bhoj, the location puts it firmly in competition with House Of Flavours. If you made Top Trumps cards of all three restaurants, I’m not sure Pappadams would win in any category (although it would come close on service). But that doesn’t quite do the place justice, because although the best is the enemy of the good the fact remains that Pappadams is a good restaurant. I can see myself going there when I fancy Indian food and don’t want the faff of House Of Flavours or the schlep to Bhoj.

As I left the waiter asked me if I wouldn’t mind putting a review on TripAdvisor if I’d enjoyed my meal, in a way that struck me as well rehearsed. I can understand why: it’s a packed market, and restaurateurs need all the help they can get. I didn’t, but I’m sure other people will. I hope they do, too.