N.B. As of August 2020 Blue’s Smokehouse has reopened.

I like cheese as much as the next person, and a well-dressed salad on a hot day can be as perfect, in its way, as the most skilfully barbecued steak. In a sushi restaurant, practically the first thing I order is avocado maki, soft, buttery green flesh, surrounded by soy soaked rice. But the truth is I can’t remember the last time I ordered a vegetarian main, and if I order a vegetarian starter, it’s more from luck than judgment. So if you’re a vegetarian, I’m sorry if there isn’t always much for you in my reviews. And I’m doubly sorry this week, because Blue’s Smokehouse is a temple to meat in all its forms – they even sneak it into the baked beans, for crying out loud. So if you find all that offputting, I completely understand. I guess I’ll see you next week.

Still here? Okay, let’s do this.

A few friends (all men, all big meat eaters) have recommended Blue’s to me in the month or two since it’s opened. They’d even said it was worth going to Bracknell for (nothing against Bracknell, although the train station late at night is a cold and lonely place, even on a full stomach). Of course, I love a challenge (and I’m starting to like train journeys) so I felt I had to give it a try. And anyway, nowhere in Reading does anything like this – the closest, I suppose, is the food at the Oakford Social Club but even that is mainly burgers and fried chicken – so it definitely justified a trip out of town. I brought backup, more than usual, because enough people were interested enough in an “authentic American barbecue” restaurant to want to come along for the ride.

Blue’s isn’t far from the station but even so it’s a bit hard to find. Some of the roads seem to have extensive roadworks and I got a bit lost wandering past the back of a shopping mall and a Brutalist car park (one of the nearby offices is called “Time Square”, but I doubt it’s a happening place to spend New Year’s Eve). Once I got there though, things improved: the site is an old pub but since the makeover it really does look the part. The interior is lovely and deceptively large: faux rustic furniture, dark grey walls, industrial light fittings. I seem to use the word “handsome” a lot in reviews but it definitely fitted here.

Even with a pack of ravenous carnivores at my table, ordering was difficult because everyone wanted to try everything. Fortunately, the menu makes provision for the indecisive: many of the mains can be ordered as a combo, with two half portions costing 50% more than a single portion (no, I’m not sure about the maths, either). In the end we all did this because we simply couldn’t pick between the different meats on offer. The enamel mug of lightly spiced popcorn we were given to munch while we made up our minds was a nice touch, too. The food turned up pretty quickly – one of many things that reinforced that this wasn’t really a sit down, take your time and stay for an evening sort of place. I think we were expecting that – and were all starving – so it wasn’t a problem for us, but it’s worth bearing in mind.

Describing the mains is going to feel a bit like a parade of dead animal, but here goes anyway. The pulled pork was excellent: tender, shredded but still in tangible threads and lightly spiced rather than slathered in sticky sauce. I appreciated that – there is a tendency to drown the flavour of pulled pork in barbecue sauce but Blue’s knows better than to do that and lets the meat speak for itself. The brisket was just as good – delicious slices of tender, smoky beef. I’d heard from other people who had been that it could be a little on the dry side but mine was spot on. Both of these came with “Texas Toast” (which I’d never heard of but which Professor Wikipedia assures me is an actual thing) thick slices of what felt like brioche, buttered and surprisingly good at soaking up all the juices. 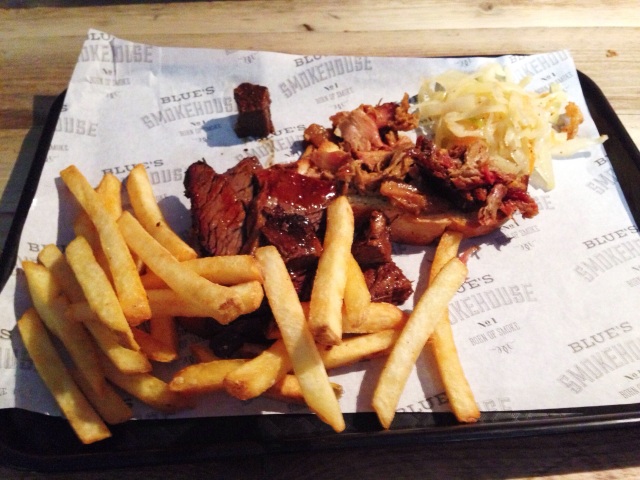 The consensus was that the ribs were the best of the bunch; I’ve never had ribs as tasty and tender as these. The meat practically jumped off the bone without needing any encouragement, leaving the bone as white and dry as the Queen’s Speech. The flesh was beautifully smoked, the sauce was sticky and ever so slightly sweet and despite the roll of kitchen towel on every table (no napkins here) they could be eaten with cutlery, instead of the sticky-fingered, orange-faced way I’ve never truly enjoyed. All these came with fries and coleslaw which were fine if not stellar. The skin-on fries were somewhere equidistant between chunky and skinny and disappointed anyone hoping for either and the coleslaw (which was mayo-free) was a little sweet for my taste, in a meal which had enough sweetness already. Portion sizes, for the price, felt slightly on the small side (if you’re English, anyway – Americans would probably consider them verging on the miserly).

Because we’re all very greedy, and were all very hungry, we ordered most of the sides. “Rib tips” were a disappointment. The menu says “we take the trimmed tips of the ribs, add sauce and return it to the smoker to cook just a little bit longer”, which sounds magnificent, but actually they felt like offcuts from the ribs. If they had spent extra time in the smoker it had had the effect of Superglueing what little meat there was to the bones. The onion bundle on the other hand was delicious. It looked a lot like the bits of fried food that get cleaned out of the bottom of a deep fat frier, but that didn’t stop us digging in. The menu said it was onion rings and strings but in the frying process all shape was lost and instead we got what was effectively an enormous crunchy bhaji. Last but not least, the beans: with added onions, pork, brisket and “a hint of bourbon and maple syrup”. Everyone else at the table loved them except me – I found it a bit strange to find chunks of meat floating in there. I got flashbacks to the mid 80s, Grange Hill on the television, Heinz baked beans with chipolatas on toast for tea (and that’s never a good thing). 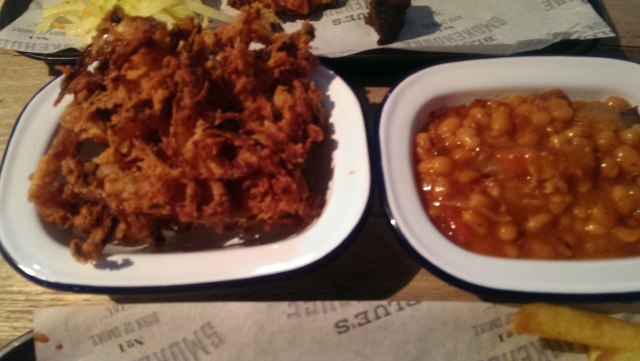 Oddly, there are no plates at Blue’s Smokehouse. Instead food is served on the equivalent of a McDonald’s tray, only black and with a sheet of greaseprooof paper between the plastic and the food. This was probably the thing which annoyed us all the most; as soon as the paper got greasy or wet it started to shred. I really don’t understand why they did this (are the trays not clean? will the food slide over the lip of the tray? are plates suddenly uncool and Blue’s are the only people who got the memo?) It didn’t look fun for the waitresses either: trying to stack four slightly bendy plastic trays of leftovers and bones up to take away without dropping anything looked like a level on “The Cube” waiting to happen.

Drinks wise we had a selection including a decent glass of malbec – smooth and very slightly sweet which made for very easy drinking – and a pint of real ale for my real beer drinking friend, who was quite tempted by the interesting sounding range of American craft beer – quite but not enough. (“I’m not drinking Blue Moon if they have it” he said, pulling a face, “that stuff’s horrible.”)

Somehow we managed to find room for dessert (I said they weren’t American sized portions and I meant it). Half of us had milkshakes that were so thick with ice cream that attempting to suck it up the straw caused a few red faces – literal, not metaphorical ones. They were superb, although Blue’s only offers milkshakes of the most straightforward ice cream flavours they sell: vanilla, strawberry, chocolate. The other half had knickerbocker glories made from the more interesting flavours on offer. These were also excellent, though they seemed to cater more for the kiddie end of the market – chocolate sauce, mini marshmallows – considering that the ice cream was decent quality (dulce de leche was especially delicious).

Service was decent if a little, well, tense. Our waitress had a slight air of the rabbit in the headlights and it was difficult to get a smile out of her, even though she got everything right and didn’t have a problem making suggestions where we needed them. Maybe she was dreading the point where she had to carry four slippery trays back to the kitchen (she should have used a “simplify” and done it in two goes, I’m sure Philip Schofield would have let her). All in all the bill for four people with one drink each, dessert and more sides than we could reasonably eat was £106, not including tip. I think the general consensus is that we thought that was pretty good.

Standing on the chilly platform at Bracknell (having missed a train by three minutes we had to wait half an hour for another one – and that can feel like a very long time, it turns out) we debated whether we would go back. Opinion was divided: a couple of us were already planning a return visit, one of us was more ambivalent. And me? I’m not sure. If this place was in Reading I can see I’d be there all the time – partly because what they do is unique, and partly because I can see it would fit perfectly for quick, informal fun meals, maybe before carrying on drinking somewhere else. But is it worth trekking for Bracknell for? Perhaps once just to try it out, maybe regularly if you really, really like meat. But for the rest of us, and for any vegetarians out there who have made it to the end, you might find the temptation not quite enough, that empty platform just a little too unlovely.