To everybody’s surprise, Forbury’s closed in April 2019. I’ve left the review up for posterity.

It’s hard to believe that Forbury’s is less than 10 years old; it’s integral to the Reading restaurant scene and one of the few serious challengers to established restaurants like London Street Brasserie and Pepe Sale, both of which I’ve already reviewed. It’s always been a conservative, if reliable, place and, despite chefs coming, going and (in one case) coming back again it feels like the food on offer hasn’t hugely changed from one year to the next – good, technically proficient French food in one of Reading’s most sophisticated rooms, and a wine list full of opulent treats and slightly more economical delightful surprises.

All that has changed though, recently, with the arrival of new head chef Tom Kneale. Based on Tom’s Twitter feed – which also gives a fascinating insight into just how hard running a kitchen can be – it looks like he is determined to shake up Forbury’s and add some edge to all that Gallic sophistication. First, in the culinary equivalent of Tony Blair scrapping Clause Four, he took the salt and pepper off the tables (apparently only three diners asked for them to be returned). Then pictures of all sorts of interesting new creations began to appear. An amuse bouche of black pudding with chocolate and crab on crispy chicken skin? A starter of raw tuna, crispy pork skin and lemon emulsion? I was sold: nowhere in Reading is doing anything quite that imaginative so I reckoned I owed it to myself (and you, of course) to go and check it out.

I really like the outside space at Forbury’s. Obviously it truly comes into its own in the summer but as the dark evenings draw in the outside lights twinkle like an early Christmas tree and the restaurant looks properly inviting. On stepping inside it seemed like nothing and everything had changed; the decor and layout were all exactly as they’d always been, but nearly all the front of house staff were new faces. A clean sweep from the new broom?

The menu had definitely changed, too. It sounds like a minor thing but the set price “market menu” is now on a separate piece of paper, giving the a la carte a little more prominence. In the starters, there were some signs of the new dishes making it through onto the menu – the “63c duck egg with onion broth, compote and foraged wild mushrooms”, for instance – but the mains still seemed very similar to the Forbury dishes of old. Perhaps, I thought, it would all be about the execution. Although I was sorely tempted to order everything off the a la carte, I thought it was only fair to try out both menus to give you an idea what to expect at either price point. Besides, the market menu has always struck me as a good deal if you’re looking for fine dining in Reading: the price has, naturally, slowly risen over the years (it’s now £23 for three courses) but it’s still great value and, unlike Forbury’s closest natural competition (Mya Lacarte, London Street Brasserie) the set menu is available all week, the only restriction being that you can’t order off it after 7.30pm on a Saturday.

The amuse bouche didn’t betray any signs of the new approach. Sweet white onion and apple velouté was pleasant, and an interesting combination, but it was very much the kind of amuse bouche Forbury’s has always done. It was also one of the starters on the market menu, so it didn’t feel like anything out of the ordinary – in fact I’d have felt a bit cheated if I’d ordered it from the set. Perhaps it was my fault; based on those Twitter pictures I’d been expecting black pudding, chocolate, crispy skin, all kinds of miniature treats and nothing in an espresso cup is going to match up to that.

They do manage the timing of a meal superbly at Forbury’s, and the starters arrived just when you wanted them to – not so soon that you felt turned, not so late that you were considering asking nicely for more bread. It sounds like something you should be able to take for granted, but so many restaurants get it wrong. “Home-made pork pie with house pickles and salad” from the set menu was lovely, if exactly what you would expect. The meat was perhaps a little coarser than I’d personally like (no jelly though, which is always a relief) the pastry somehow lacked the lardy crispness of a properly great pork pie. The smear of English mustard was a nice touch, if a tad generous, and the little thicket of salad leaves was really delicious – lightly dressed and sweet, which was a lovely contrast to the pie. The pie managed to both be heavy and small, which made me feel a little ungrateful on several levels all at once. Cornichons had a nice crunch but were largely indistinguishable from the ones in a jar in my fridge (maybe that’s why they were called “house pickles”).

From the a la carte the “Brixham crab, dill oil, shallot ketchup and watercress” looked less appealing. I was expecting something like a tian but this was altogether soggier, claggier and less delicate. There were little blobs of what was billed as shallot ketchup but my palate must have been playing tricks on me because I got a lot of citrus and not much dill or shallot. This all sounds very harsh, so I should add that although it wasn’t what I was expecting it was very tasty indeed. The small heap of watercress on top, though, added little to the experience.

At this point it’s worth mentioning the one obvious big difference at Forbury’s: the staff. Forbury’s has always offered that wonderful, unobtrusive service that the French, when they get it right, are so brilliant at. You know the sort: the waiting staff are right on hand whenever you want anything, top up your glass when it’s getting low but the rest of the time you don’t even notice them. It’s this last bit that’s the real skill, and it’s also where the new team have a bit of work to do: our glasses, for instance, were regularly topped up, whether we wanted that done or not.

Unfortunately, the solicitousness didn’t end there. To give you another example, two minutes after our starters arrived we were asked if we were enjoying them. Fair enough, although waiters always seem to appear to do this when you have your mouth full. Less than two minutes later we were asked again about our starters by a different person. That same person asked again as she was taking our empty plater away, just in case she had forgotten our original reply. The overall effect was more of neediness than service. What doesn’t help is that the waiting staff didn’t seem to be divided into sections: everyone seemed to cover every table, so they didn’t know what you had or hadn’t already been asked. Maybe this is exceptional as we were there on a week night, maybe it just shows how keen the staff are: either way it needs to be toned down a little.

We weren’t asked about the mains quite so frequently, thank goodness. “Haunch of venison with swede, purple kale, mushrooms and cherries” (from the a la carte) was simple, well executed and delicious. The venison was a generous portion, pink and tender, resting on a bed of pureed swede with a few kale leaves in between. The cherries were cooked into a jam-like state and then reformed into tiny perfect domes on the plate, a lovely piece of technique on what was otherwise quite a straightforward dish. This nearly brought out the best in the venison, although overall I found the whole thing a little on the sweet side. Luckily the waitress had suggested some duck fat chips, served in the ubiquitous little frying basket, which made the meal feel complete. 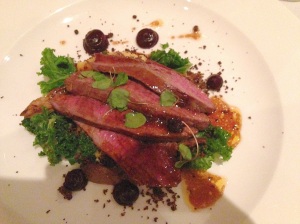 Pan fried sea bream with herb crushed potatoes, salsa verde and green beans, from the market menu, was less successful. The fish was a beautiful fat piece of bream, cooked so the flesh flaked under a fork and the skin crackled under a knife. The rest of the dish didn’t give it the support it so deserved. The potatoes appeared to have resisted the crushing process largely unscathed, the promised salsa verde just didn’t show up at all and overall it felt like a dish that could have been so much more with only a few little changes.

All of this was washed down with a very reasonable bin end – an Australian pinot noir at £35, “Cruel Mistress”, which was gorgeous. It had more complexity to it than some of its New Zealand siblings and just about worked with most of what we had ordered – enough substance to stand up to the venison without drowning out the bream (yes, I know people say you shouldn’t drink red with fish, but I’m a heathen about this sort of thing).

For dessert we didn’t fancy anything off the set menu so we went wild and ordered from the a la carte. This turned out to be a very good idea; the desserts were the high point of the meal.

The fig and honey tart with vanilla ice cream was delightful. It was served in a deep bowl and the topping was part bakewell, part macaroon – lovely, light, chewy and meringue-like, it had me scraping the edges of the bowl with my spoon. The honey was almost undetectable but that didn’t take anything away from what was essentially a very well done school dinner type dessert. I love a hot pudding (although I’m not sure I was expecting one from Forbury’s) so this was perfect for me.

The Valrhona chocolate mousse with mango sorbet and chocolate soil was glorious – deep, dark, rich and bitter, and completely transformed by the gritty crunch of the chocolate soil. It didn’t need the mango sorbet, although it was so green and fresh that I wasn’t going to turn it down. The only slightly bum note was the microshoots of coriander strewn across it. I tried enough to decide it didn’t work and left the rest, but it didn’t detract from one of the best desserts I’ve had this year.

I sense, from my visit, that Forbury’s is still a work in progress. Dinner for two, including one bottle of wine, came in just shy of £100 and I thought it was good value. The thing is, I had a lovely meal, with more hits than misses, but it wasn’t the meal I was expecting. There’s a sense of nervousness about the service and a little bit of risk averseness about the food. I can understand why – it must be difficult, stepping into a local institution like Forbury’s, and getting the balance right between evolution and revolution – and I saw enough to think that they’ll get there, but my overriding impression was frustration that they haven’t moved a little bit quicker.

The most telling thing about the meal? Just after I paid, I spotted something on the table which I’d previously missed: the salt and pepper mills were there in front of me. Next time I go, and there will be a next time, I hope they’re gone for good.