Café Yolk stands apart from all the other places I’ve reviewed so far in one important respect: it’s the first establishment I’ve visited that was completely full. When I arrived, at Saturday lunchtime, practically every table was occupied (except for the ones outside which seemed a bit hopeful on a crisp November afternoon) and it took a little while before I could sit down and peruse the menu, written out, blackboard-style, on the back wall.

To understand why, you need to look beyond this little, attractive-looking café, tucked away on the edge of Reading’s leafy university area, and wander into the altogether more weird and wonderful world of the internet. Yolk, you see, is incredibly popular. Active and engaging on social media, they are (at the time of writing) ranked second in the whole of Reading on TripAdvisor: a glowing review goes up every few days, all praising the breakfasts, which are said to be the best in Reading. How could I resist going to see what the fuss was about?

The first thing I noticed, apart from how busy it was, was just what a loud room it is. It’s all hard chairs and bare walls, and that many tables of people chattering away creates an almost deafening cacophony. Yolk has definitely made the most of its location, and most of the clientele are students; skulking in the corner I felt a bit like I’d wandered into an episode of Skins by mistake. The tables are bog-standard café issue (mine hadn’t been wiped when I sat down – always a nice first impression, that) and the chairs were the kind of rigid stacking kind you wouldn’t want to spend too much time on, but all of that is beside the point, right? Because it’s all about the breakfast.

There are no paper menus, but looking at the blackboard the emphasis was definitely on breakfasts and burgers, the latter described as the “lunch menu”. Once the queue had cleared away (which, bizarrely, took some time – where were they all sitting? Was there a secret basement I didn’t know about?) I went up and placed my order; full English with well done bacon and a Swiss cheese and Portobello mushroom without toast. I had to repeat my order, as if I’d asked for something extremely complicated.

There was no coffee because the machine was broken that day, so I got two large teas. This gives me an opportunity to indulge in my first rant of this review, because Café Yolk charges extra for a large tea. You might think I’m a bit odd for objecting to this, but I think this is nothing short of a scandal. It’s hard to imagine a product cafés make more money on than tea. I know how much it costs to buy a box of teabags, and how much it costs to boil a kettle; charging one pound fifty for the privilege is verging on extortion at the best of times. But an extra twenty pence for a little more water? Really, it’s taking liberties with a good proportion of your customer base. Anyway, I took my two cups of hot water with a teabag in them, each costing me the best part of two pounds, and walked all the way to the other side of the café to put milk in them.

I know, I know, I’m whinging. But it’s beside the point, right? It’s all about the breakfast.

Our food took a reassuringly long time to turn up – nobody wants to feel the ping of a microwave is involved in the most important meal of the day – and the chap delivering the food was cheery and keen to bring over any extras (butter, sauces etc.) which was a nice contrast to the counter service.

The full English, which costs five pounds ninety-five, contained all the staples: a rasher of bacon, a sausage, a fried egg, half a tomato, a mushroom, some baked beans, toast and sautéed potatoes. For me, the quality of a breakfast stands or falls on the meat products and these were middling at best. My rasher of back bacon (why is it never streaky?) wasn’t well-done in either sense of the word, although looking at the bacon arriving at other tables it wasn’t quite as pink and flaccid as theirs. The sausage had the smooth bounciness of cheap supermarket produce – although at least there were some herbs in there so the taste was good, even if the texture wasn’t. The baked beans were good (school dinner style, cooked in a pan so they’re a little bit mushed, exactly how beans should be, in my opinion), although it shouldn’t be difficult to get baked beans right. The toast was thinner, whiter and cheaper than Miley Cyrus. Overall it was edible and sufficient but there’s no pleasure in eating that many calories with so little flavour. I didn’t find myself, at any stage, thinking “My! I am literally eating the best breakfast in Reading.” 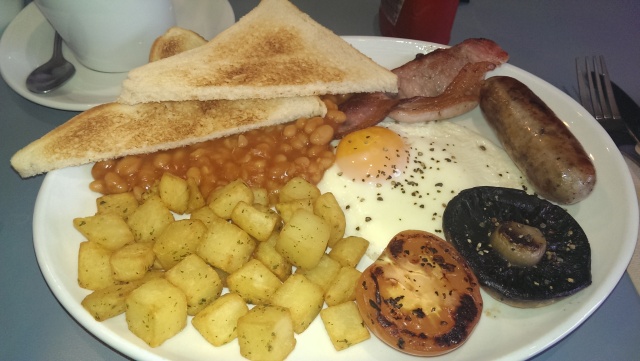 The omelette, though, was really poor. A good omelette is thick, seasoned, gooey in the middle, folded over and full of wonderful things. What I got instead was a thin frittata, no seasoning, cooked completely through and rolled into some kind of surreal egg spliff. The Portobello mushrooms were in the middle, gently staining everything a murky grey. And the cheese? Rather than grate cheese into the omelette mixture, which might have made it taste of something, three slices had instead been draped on top of the whole affair, seemingly minutes before dishing it up. The irony of a place called Café Yolk doing something so awful to eggs wasn’t lost on me. Apparently their eggs are free range, and from a local farm; it’s a pity they don’t treat them better than this.

They should thank their lucky stars they aren’t called Café Mushroom, because the mushrooms were even worse. They seemed to have been prepared by someone who liked neither mushrooms nor cooking. Well cooked mushrooms are an amazing thing – all dark and sticky and savoury, salted, peppered, buttery, maybe with some Worcester sauce in there to complete the magic. These, instead, were flabby, drippy things, a limp parody of what I’d been hoping for. They were “cooked”, in the sense that they weren’t raw, but not cooked in the sense of having been prepared by a chef. If it wasn’t for the overpowering taste of vegetable oil I would have thought they’d been microwaved.

My omelette came with the toast I told them I didn’t want. I didn’t eat it.

I think I must be missing something about Café Yolk. It’s a lovely spot, with loads of potential, and it clearly knows what it’s doing. It’s identified a market, it’s got a strategy, and it is doing very nicely out of it. Maybe if I was a student this would be my favourite place in the world. But it’s many years since those happy days, and for me this was just a greasy spoon pretending to be something better. I left it wanting better: better ingredients, better service and above all better cooking. You can get better breakfasts at Bill’s or Carluccio’s, and you can get more honest breakfasts at dozens of cafes across Reading. I think Café Yolk is best summed up by the bacon that came with my Full English – they class that as well done, and maybe they believe it, but I don’t. If that puts me out of step with the rest of Reading, so be it.