I had high hopes for The Bull On Bell Street, in the middle of Henley, when I chanced upon it last year. I’d stopped in there one Saturday for a decadent mid-afternoon snifter and been wowed by it; the refurbishment had been extremely tastefully done (all comfy old chairs and lashings of Farrow and Ball), the list of wines by the glass was very tempting and the wintry waft of woodsmoke was wonderful. I wanted to curl up in a chair with a good book (or, better still, a trashy one) and never leave, and I made a mental note to come back and try the food another time. And so, a weeknight in January, shortly after the payday that had felt so long in coming, I did.

We wound our way through the bar to the restaurant area at the back, and in doing so marvelled at the sheer size of the pub. It’s made up of two or three generously sized rooms which comprise the bar, but the two rooms at the back for dining were also both really big with beautiful tiled floors. The whole thing looked a bit like a posher, less tired Hotel Du Vin – nicely spaced tables on the right, appealing looking booths on the left, attractively lit with plush banquettes. We took one of those and the waitress handed us the suitably rustic looking menus (printed on rough brown paper, a restaurant cliché which has taken a surprisingly long time to reach us from London). She also brought some bread (with butter, sadly still hard from the fridge, and some oil and balsamic glaze) and tap water (in a nice big jug with a sprig of mint and a slice of lemon) without being asked, which I thought was a nice touch.

The menu was also promising. It wasn’t too big that you doubted their ability to cook it all, or so small that you felt hemmed in and without choice. I know you only need to find one dish to eat on a menu to make a place worth a visit but it’s one area where it’s nice to have difficult choices and both of us had trouble narrowing each course down from three or four likely candidates.

First things first, though: we ordered some wine from the list I’d found so appealing on my previous visit. Because one of us was driving we were limited to wines by the glass but, even so, the choices were good. The South African cabernet merlot was soft and eminently drinkable (if not the most complex red in the world) but the Chilean sauvignon blanc was lovely – zesty and very slightly sweet with hints of peach (it reminded me of a viognier, one of my favourite whites). Neither of them cost more than a fiver.

If you stopped reading there, you’d probably reach the conclusion that I’d had a fantastic evening. And, if I’d left the restaurant after the wine, I probably would have done. Regrettably though, however nice your furniture or tasty your wine, a restaurant stands or falls on its food and – for all the superficially promising signs – food turned out not to be the Bull’s strong suit.

The starters were both squarely on the border between underwhelming and downright disappointing. The “smoked haddock pot, rosemary and garlic” was not at all what I expected. I thought it was going to be a type of potted haddock affair, all butter and spices. Instead, I got a miniature fisherman’s pie, with a thick layer of haddock, mashed potato and a cheesy topping. There was no sign of rosemary or garlic anywhere, or indeed any seasoning. Or flavour, save for the smokiness of the haddock. The board (it’s always on a board these days, isn’t it?) had a little white jug with a cream coloured sauce in it. I dipped the tines of my fork in to try and taste it and it tasted of nothing. When I asked the waitress to remind me what it was she revealed it to be “butter sauce”. No sign of the rosemary or garlic there, either, more beurre blank than beurre blanc. It was almost too bland to criticise – a fitting accompaniment to the Mumford And Sons, Coldplay and Adele being pumped through the speakers at a volume I wasn’t personally happy with (although, in my case, that’s any volume above “muted”). 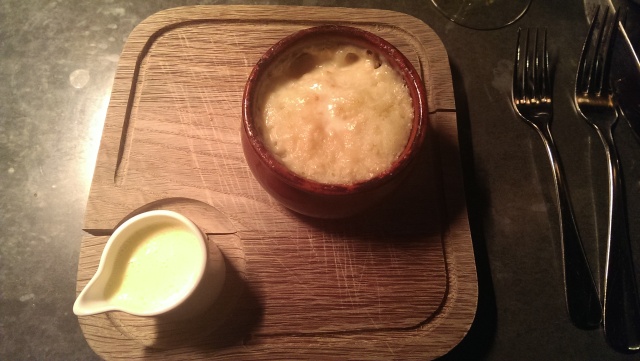 The other starter was described as “smoked duck ragu” but, when it arrived, betrayed the delicious promise of those three words. I’m not sure how it could be described as a ragu: no tomato, no finely chopped meat, no glorious sticky consistency. Instead, it was pasta, slices of smoked duck, some kind of bland jus and some finely diced courgettes. It was simultaneously exactly the sum of its parts and miles, miles less than that. When I’d asked the waitress told me the pasta was pappardelle and maybe some of it was meant to be, but some of it was definitely tagliatelle. To avoid any complications which might have been caused by the varying widths, all of it had been boiled into flaccid submission. I’d never really considered having smoked duck in pasta before my meal at the Bull, and I can confidently say that thanks to the kitchen there I never will again.

The mains were no better. “Pan fried chicken breast, parsnip mash potato, St James cabbage, cauliflower cheese and cream chicken sauce” was pretty much exactly that. The chicken (as you can see from my picture) was massive – I think it had been working out – with a limp skin and no signs of any seasoning. The cabbage was nicely cooked, in fairness, and did indeed have creamy sauce but it didn’t taste of chicken. I’m not sure the chicken did either. The parsnip mash potato was bland and lumpy, neither mashed nor containing any discernible parsnip. All in all, the overall effect was that of eating average food with a heavy cold: nothing tasted of anything.

I should exempt the cauliflower cheese from that criticism, because it was terrific – the cauliflower cooked but still firm, the sauce rich and cheesy with a delicious slightly chewy crust on the top. But it wasn’t enough to redeem such a forgettable dish. I didn’t finish it: there didn’t seem any point, when every mouthful was the culinary equivalent of the One Show.

The other dish sounded interesting: seared salmon with roasted fennel, chestnut mushroom, salt baked celeriac and watercress. What turned up, as so often that evening, was anything but. It takes real skill to cook salmon so it’s still slightly pink but the skin is salty and crispy, and on this evidence it’s skill that the Bull’s kitchen just doesn’t possess. Again, there was no real sign of seasoning at all. But worse still, the vegetables were woeful. I did catch a bit of mushroom, and a plenty of watercress, and some celery – quite a lot of celery, in fact – but the salt baked celeriac and fennel were harder to find. I got an occasional sliver of celeriac, a momentary flash of fennel, but in reality it was almost as if the kitchen had put just enough of each in there to tantalise you with what the dish could have tasted like if it had been done properly. Again there was no sauce, no flavour, nothing to excite any palate. I’m a long way from the best cook in the world, but if I wanted a badly cooked salmon steak on top of an indifferent underseasoned stir fry even I could knock that up at home, and it would cost a lot less than fifteen pounds.

“Shall I bring you the dessert menu?” said the waitress, taking away the two plates and scrupulously failing to notice how much food was left.

“No thanks, we’ll just get the bill.”

This was not queried, which sums up the service in general. Our waitress was pleasant enough, although she got increasingly brusque as the restaurant got more and more busy; the place was packed, especially for a Tuesday night (I can only assume most of the diners had heavy colds already). She was however very robotic, something I only noticed when I saw another waiter serving the table opposite us; he seemed to understand what the dishes were and how to sell them, whereas she was just reading off a shopping list. Her lack of enthusiasm made a lot more sense once I’d eaten the food, but by then it was too late. Two courses for two people, including one glass of wine each, cost us fifty-six pounds and two hours of my life.

I’m cross that I went to the Bull. I’m cross that I left Reading for such a nothingy meal, and disappointed with myself for picking so badly – because ultimately, reviewing somewhere out of town that isn’t worth going to is almost like no review at all. If I review a restaurant in Reading and say it’s good, maybe you’ll go. If I say it’s bad, perhaps you’ll stay away. But a bad restaurant in Henley? Effectively I’m telling you not to go somewhere that you probably wouldn’t have visited anyway, and this review is all any of us have to show for it. Never mind, I’ll learn from this so as to serve you better: next time I won’t be taken in by beautiful pubs with new paint jobs, and I’ll remember that if a kitchen doesn’t know how to season its food then the whole place is simply not worth its salt.