It seems like 2014 only just kicked off and here we are, busier than ever. Hopefully you all made it through to the end of the month with your resolutions intact (if you made any) and with your January pay packet not completely spent before you earned it. Clichés aside, January and February can be some of the leanest months for the fun stuff with the dark and rainy weather making everyone want to stay in – especially when the alternative is going out and paying extortionate amounts of money for a Valentine’s meal where romance is the one dish that is never reliably on the menu.

Despite harvest time being a long way away there’s been a bumper crop at Edible Reading. I’m really pleased to say traffic on the blog surprises me (in a good way) every month and I owe that to you lot, so thank you. Oh, and don’t be put off by this being a round-up – there’s lots happening in the Reading food scene that simply isn’t covered by the reviews. But let’s do the reviews first – here’s what you may have missed.

Barts, 6.2 – What a start to the New Year! Of course, you could read reviews in the local papers (where it gets covered at least every 6 months – why could this be?) but if you really want to know what its odd mixture of good service and mistake-laden food is like, check out the full ER review here.

Sweeney and Todd, 5.2 – The legendary pie shop has been drawing in the punters for over 30 years. Why? Search me. Bad boiled potatoes and “hot jelly” got the lowest mark from ER this month. See why here.

Bhel Puri House, 6.8 – Reading’s only vegetarian restaurant is easy to miss but worth seeking out for the chilli paneer alone. Click on the link here for the full lowdown on an excellent alternative to Reading’s sometimes monotonous lunch scene.

The Bull on Bell Street, 5.3 – This is what happens when a revamped boozer doesn’t have a kitchen to match its good looks. Such a shame. Have a drink but my advice is to give the food a miss. Go here for the full sorry story.

In other news (cue the shuffling of papers while I wait for the autocue to get to the cute hedgehog story at the end of the broadcast) there has been a flurry of new places opening or getting ready to open.

First of all, three months after I first mentioned it and a full four months after its promised opening date, Lebanese restaurant La Courbe has finally opened in King’s Walk, along with its adjoining wine and cocktail bar (on the side nearest The Mix, so perhaps they’ll get some overflow trade). First impressions, from a walk past, are mixed at best. The décor – lots of purple and pistachio, chrome, cream leather and square glass tables – is rather stuck in the 90s, and the restaurant space is basically a glass-fronted box with an open kitchen at the back. On the other hand, I’ve heard decent reports of the food. It will be nice to see if someone can finally make a go of one of those downstairs units in King’s Walk – I’ll be there to review it in due course.

Also after many months of “coming soon”, Buffalo Grill on the edge of the Broad Street Mall has opened, offering burgers, ribs and fajitas. Lots of stuff, in fact, that you can get in numerous other restaurants in Reading. Again, I know a couple of people who’ve been and the feedback I’ve had ranges from “never again” to “maybe again”. If enough people really want to know what it’s like, I might review it later in the year (I can’t pretend to be hugely enthusiastic, can you tell?)

Closer into town Crêpe Affaire has opened next to the “lovely hot dogs, nice and fresh” booth (which, I can solemnly assure you, I will never review – not even if all other restaurants in Reading close and it is the sole alternative to cooking at home). It looks very modish, with bare walls and pale oak and staff in little white hats. Fingers crossed it’s more than a one trick pony and lasts longer than the ill-fated cupcake shop a few doors down, on the edge of the Oracle, that closed not long before Crêpe Affaire opened. I have also discovered, in the course of writing this, that it’s very difficult to talk about this restaurant without getting “My Affair” by the late great Kirsty MacColl lodged in my head as an unshiftable earworm (thanks for that, Crêpe Affaire. Thanks a bunch.)

The other new place due to open is My Kitchen, in a skinny little unit on Queen Victoria Street. Again, the interior looks very now, all bare brick and funky chalkboards, and I’d guess it will be a lunch place but that’s all I can say. They have no website that I managed to track down: honestly, you try Googling “my kitchen Reading” and see if you have any more joy than I did (the curse of the town name that also happens to be a verb strikes again). The picture below is pretty much all we have to go on, but I’ll keep peering through the windows and will report back. 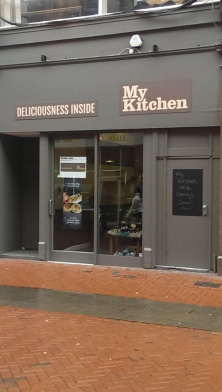 Of course, the flipside of new restaurants opening is existing restaurants closing, and sadly Kyklos, the Greek restaurant in King’s Walk, has closed this month. They didn’t quite make it to their first birthday, which is a real shame – when I reviewed it in October I thought the service was amazing but the food was patchy, and I was worried then that it was a large room which was never even remotely full. I’ve added a note to the review which is here.

Another piece of restaurant news relates to a change of personnel. Since the ER review of Forbury’s in November, chef Tom Kneale has announced on Twitter that he has left by mutual consent with immediate effect, to relocate to Bristol and spend more time with his family. Hopefully he will manage to find a new role where more of his creative ideas make it out of the kitchen in front of the diners. Normally I wouldn’t announce this – ER is much more interested in food than in chefs – but it does seem relevant in this case. I’ve also added a note to this review, too, which is here.

Talking of being creative, it seems that ER is having quite an influence on the local papers, despite just being a little blog. After almost six months of ER visiting, reviewing and recommending the best independent restaurants the Reading Post has crowdsourced a similar list using Twitter and published it with useful pithy remarks such as “upmarket Indian” and “suburban Thai”. Still, better late than never and it’s nice to see them supporting small local businesses. In unconnected news, the same week the Post reviewed Cleavers in Wokingham, an offshoot of large Italian chain Prezzo (this time hoping to be “the place for burgers, chicken and ribs” – as opposed, presumably, to all the other places). Still, there is one local business that can always rely on support – the Post also published a piece recently publicising a wine and canapés evening at Bart’s. They just can’t stay away!

Fortunately, there are other websites championing Reading’s independent scene. Alt Reading launched last week with a handsome, regularly updated website aiming to celebrate the best of Reading’s independent shops, restaurants and culture in all its forms. It’s just what Reading has needed for some time, and I’m really looking forward to seeing them develop the site over the months ahead. And I’d say that, I promise, even if they hadn’t been so complimentary about ER here (thanks guys!)

Right, I can see the hedgehog story approaching on the autocue so that’s definitely the end of this month’s round-up. Keep telling me – by email, by commenting, or on Twitter – where you want to see reviewed and I’ll add your suggestion to the list, which is here. In the meantime, tune in next Friday when there will be a new, unbiased, independent restaurant review for you. Just like always.