RYND closed in August 2016. I’ve left the review up for posterity.

My normal rule is not to review restaurants that have just opened. It’s not fair to judge a place in the first month when it’s finding its feet, and most restaurants in Reading don’t have a soft launch to phase themselves in. One minute they’re all boarded up with people beavering away inside, the next they’re open and the front of house and the kitchen are learning to work together to offer something seamless. It must be a steep curve, doing that with all those hungry, demanding customers at tables expecting everything to be perfect from day one.

My other rule is that I base my review on a single visit. In an ideal world it would be lovely to make multiple visits to a restaurant before writing a review, but life’s too short – especially if you want to read a new review every week. So instead they get one chance to impress and that’s it. Sometimes that can be a little unfair on restaurants: I’ve revisited some and found them to be better than I thought. Dolce Vita, for example, has constantly impressed me when I’ve gone back there and Bhel Puri House has become a reliable staple for a quick, interesting lunch. Sometimes it flatters places: Sushimania has never been anywhere near as good since as it was the time I went on duty.

All of this makes RYND a difficult review to write. In the interests of full disclosure, I went there “off duty” shortly after it opened and really liked it. I thought the food was interesting and well done and the service was excellent. But going back, just over a month after it opened, was like going to a different restaurant. What changed?

Well, the menu for a start. Sitting down I was presented with a different menu to the one I chose from on my previous visit – and, indeed, a different menu from the one on the website at the time of writing. The alterations were subtle but telling: no courgette fries any more, two of the burgers had come off the menu, one of the starters had been removed, you no longer have the option to order pulled pork as a main except as part of the upsold combo with chicken wings (odd, really: the menu boasts about how proud RYND is of its pulled pork but it’s not possible to order it on its own). The burgers that had been taken off were the basic options: a plain hamburger or a cheeseburger. The cheapest things on the old menu, as it happens.

That leads to the second change on the menu: the prices. Everything has been hiked in the month since the restaurant opened, the starters by around a pound and the main courses by between two and three pounds. All the burgers are now over a tenner, although in fairness to RYND you pay about the same for a burger at their closest competitors, the Oakford or Handmade Burger. Even so, it just felt a little cynical. Perhaps the initial prices were soft launch prices and RYND just decided not to tell anybody.

It wasn’t a brilliant first impression, but I put it to one side. After all, the prices weren’t necessarily unreasonable and RYND deserved to be judged on the food, the room and the service, just like any other restaurant. And the room, it has to be said, looks gorgeous. All that exposed brickwork and exposed light bulb filaments might be a trope that’s been done to death in London, Liverpool and Glasgow but in Reading it still makes a refreshing change to see somewhere so beautifully fitted out. It’s broken up nicely into lots of little sections with a long, atmospheric bar (when I went there were a row of very bearded chaps sitting at it, all check shirts and beanies, presumably having a craft beer and pretending to be in Williamsburg). The only drawback was the black banquette running round the room – it looked plush and comfy but was disturbingly like a church pew, with less give than Jimmy Carr and Gary Barlow put together.

And the food? Well, the food is where RYND really fails to impress. Of the starters, hush puppies were pleasant enough – deep fried corn fritters with enough texture to just about compensate for the lack of taste, still a little too crumbly for my liking but quite nice paired with sweet, spicy, slightly smoky chilli jam (“quite nice”, with hindsight, may well have been the high point of the meal). 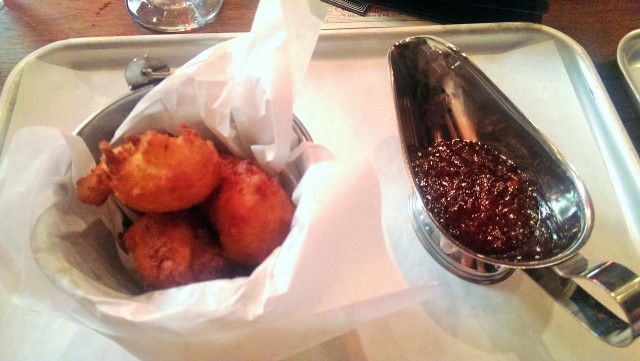 The other starter, the chilli bowl, was poor: a very small skillet of slightly anonymous chilli with a little heat but not enough, too much bounce and nothing interesting going on. I was hoping for something slow-cooked and complex, but this was miles from that (I’m no cook but I can make better chilli than this at home, and when I’m saying that there’s definitely a problem). Worse still was the little metal bucket of tortilla chips which came with it. Tortilla chips must be one of the cheapest things RYND serves up, and yet the bucket was barely two-thirds full. Again, it felt cynical.

Pulled pork was possibly the crowning disappointment. Pulled pork should be dry and sticky with some smoke and spice, but this was just wet. Not moist, not even damp, but plain wet. It came in a sesame seed bun (with a needless wooden skewer: it was nowhere near tall enough to need one of those) drowned in mayonnaise. There was, I’m told, cheese and barbecue sauce and coleslaw in it but it didn’t feel like that at all. It didn’t even really feel like pork – with all that finely shredded mulch in mayonnaise I felt more like I was eating Reading’s most expensive tuna melt. It was so sloppy that eating it tidily was almost impossible – every bite forced more of it out of the other end on to the tray (of course it’s a tray, just like they’d have in Williamsburg). It wasn’t a sandwich, it wasn’t a burger, I’m not really sure what it was. A mess, I guess.

I did like the fries, though – flattened crinkle-cut slices like mutant McCoys, they were one of the better things I ate, especially dipped in the barbecue sauce. I think I’d probably describe the fries as quite nice.

The “smokehouse burger” was a run of the mill beef patty, a little bouncy in places as the chilli was. It was meant to come with barbecue sauce, mature Cheddar and crispy fried onions, but the onions were missing, substituted with a thick dollop of red onion marmalade so sweet and sticky that you could easily confuse it with dessert. The mini-pail of sweet potato fries on the side (I asked for these instead because I wanted to try them out) did little to lift the overpowering sugariness. In their defence, they were really good – crisp and light where sweet potato can often be a tad soggy and limp. With a different burger they would be worth the swap but with this one it all felt a little cloying. It just didn’t feel like an eleven pound main course, and until recently it wouldn’t have been one.

Service was pleasant and friendly: our waitress did have a crack at flogging us olives and recommending the most expensive main course, but that probably wouldn’t even have registered if I hadn’t already been irked by the menu so I won’t hold it against them. I should also mention the drinks – it was happy hour so I tried the spiced apple daiquiri which was pleasant but no more than that, and a 125ml glass of Portuguese red which was straightforward, uncomplicated and really easy to drink (hats off to RYND for offering small glasses of wine and pricing them fairly: many places don’t). The meal for two, two starters, two mains, those cocktails and a small glass of wine came to forty-six pounds, not including tip. Looking at the bill I saw the final piece of stealth margin maximisation – charged an extra pound for substituting sweet potato fries for standard fries, another thing the menu neglects to mention.

As you can probably tell, RYND got my back up from the start. But being dispassionate about it and trying to forget my earlier, better visit (and wider menu. And better pricing. Hmm. Suddenly there seems to be quite a lot to try to forget) I still can’t recommend it. Judging it on its merits, if I wanted this kind of food Blue’s Smokehouse does it many times better (and a little bit cheaper). And if I wanted this kind of food and didn’t want to leave Reading, I think I’d go to the Oakford which offers more, better burgers, again slightly more attractively priced. But I suspect RYND will do perfectly well all the same – it’s a kind of food people want to eat at the moment, the kind of place people want to eat it in and I imagine hipsters will enjoy telling each other that the Oakford is so last year.

Oh, one last thing: RYND is pronounced rynd as in quite nice rather than rynd as in cynical. But in reality it’s probably a bit of both.