As regular readers will know, the overwhelming majority of restaurants I review are requested by people who read the blog week in, week out. If there’s one thing that comes out of those requests, it’s that you really want to see reviews of pubs that do food. And that, generally speaking, means leaving Reading and heading out into the countryside. There’s only one problem with that, which is that a lot of pub menus look really uninspired. In fact, once you read enough of them they all start to blur into one. They all do a burger, they all do fish and chips, they all do sausages and mash, they nearly all do confit duck these days. They’re all so similar, in fact, that you start to wonder if they’re all being supplied by the same person, perhaps in a big lorry of some description (surely not).

So I’m afraid I’ve cut a lot of the pubs from my to do list. They might be well worth a visit if they’re your local and you can stagger home afterwards, but I think they have a limited appeal for people those of us who would need to drive out into the sticks to go there. If I’m going to forego the delights of more than a solitary glass of wine I do want to feel like the food is worth it. So what stayed on the list? Pubs that had menus with a little bit more about them. Menus with interesting combinations of ingredients. Menus that weren’t going through the motions and dead behind the eyes. The Bull at Sonning was one of those pubs, so I turned up there on a midweek night to see if my menu spotting skills had let me down.

It really is a beautiful pub, inside and out. It’s your typical ancient timbered pub with enough low beams to require a special stooped walk, lest visitors wake up to find themselves on a trolley at the Royal Berks. It has a warm, inviting fireplace in the front bar, mismatched furniture all over the shop (I don’t think I saw two tables the same) and loads of nooks and crannies, just as an authentic pub should. Eating there a deux, in a little table tucked away, felt beautifully conspiratorial. What is also has, on a cold it-feels-like-winter-even-though-it-was-sunny-only-last-week school night is an absolutely packed bar and dining area (it was impossible to tell how many people were locals and how many had been drawn there by the recent not very extensively reported news about properties in the area – really, the Sonning residents should have worn badges, or red trousers, or both).

I got a sinking feeling when I looked at the Bull’s menu again and started to think I might have made a mistake. It’s a big old menu, broken into two parts: a section of pub classics on the one hand and what they term “chef’s creations” on the other. This felt like an awfully brave, rather clumsy (and slightly silly) way to describe half of your menu. I was also, and this is probably a bit unworthy, put off by the typos: the menu extolls the virtues of eating “seasonably” and includes “noddles”, which made me chuckle (I thought you were meant to use these but not necessarily cook with them). As if those fourteen main course options weren’t quite enough, there was also a handwritten sheet with half a dozen more specials on it. Things were starting to look distinctly iffy.

Well, to deflate the mounting sense of dread nice and quickly, I was worrying unduly: everything I had was fantastic. They may not be able to do a decent job of every single thing on that menu, but they barely made a mistake with anything I ordered (this is why I write restaurant reviews and not mystery novels).

I never order soup, because it inevitably leaves me too full for my main course. But when I saw that The Bull had honey roasted parsnip (probably my second favourite vegetable) soup with chestnut dumplings I was powerless to resist it. I was so glad I had it, too. It came in a miniature casserole filled to the brim with smooth puréed parsnip and nestled on top were two walnut-sized dumplings. On the side was a warm, crusty miniature loaf, in a miniature bread tin, and a small pot of room temperature butter (a detail many places get wrong, and such a bugbear of mine).

This dish was a good example, I think, of why I’d picked The Bull to review. The soup was very good – maybe a little underseasoned (a touch of spice would have gone well here) but beautifully sweet and smooth. But what elevated it were the extra touches – the bread and in particular the dumplings: rich and soft with their own hint of sweetness from the chestnuts. The loaf was slightly chewy (I wondered if it was quite as freshly baked as it appeared) but was more than up to its two main jobs: having butter melted onto it and being dunked into the soup to make sure no mouthful of parsnip got away.

The other starter was equally appropriate on a cold, miserable day and was every bit as delicious: mulled pear and Barkham Blue tart. Some people will read that and turn their noses up, which is fair enough, so perhaps I’m just speaking to the rest of you now, but my goodness it was gorgeous. Soft, spiced, slightly gritty pear covered in molten creamy blue cheese, the rind the only solidity left, all served on a disc of crispy pastry. Again, there were more cheffy flourishes than the dish needed – pickled walnuts around the outside, sweet caramelised red onions (maybe a few too many) on top and a mulled wine syrup traced around the edge. I could have happily eaten a tart like this the size of a paddling pool. It just had everything: sweetness, saltiness, crispiness, gooeyness. 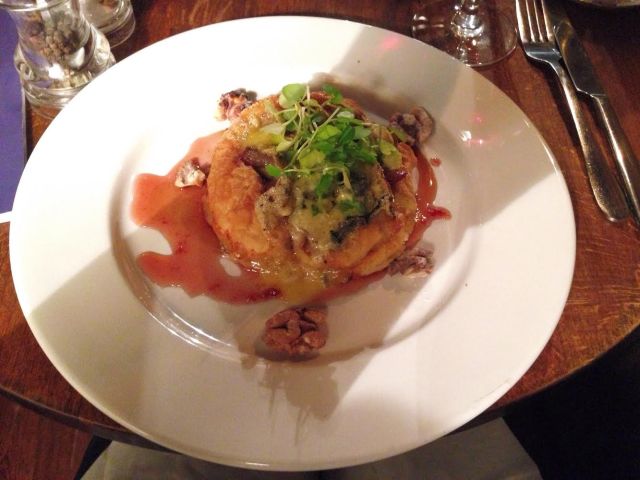 Did the mains live up to that standard? Well, to my increasing surprise and delight, yes. Chicken pie, again, is exactly the sort of thing I’d seen and discounted on many pub menus. But here the filling was a slow cooked stew of tender thigh, soft leek and a rich, glossy gravy which was made to be soaked into pastry and devoured with gusto (the pastry, a flaky buttery lid, was perfect for the job). I know some people feel that a dish like this, with a top crust, isn’t technically a pie and I have some sympathy with that view. But it was too delicious for me to care. On the side, a decent but not overwhelming pile of dark, crinkly savoy cabbage simply steamed, buttered and salted: a great ingredient left to speak for itself. The only disappointment was the goose fat roasted potatoes. I’m sure there’s a rule somewhere which says that there’s no such thing as too many roast potatoes but I don’t think it applies when the potatoes are like this: they looked the part but lacked that almost glass-like exterior of a truly great roastie. Instead, they felt chewy and unremarkable, almost as if they’d been reheated. Still, by then I was full and at least, if nothing else, I wasn’t devastated not to be able to finish them. 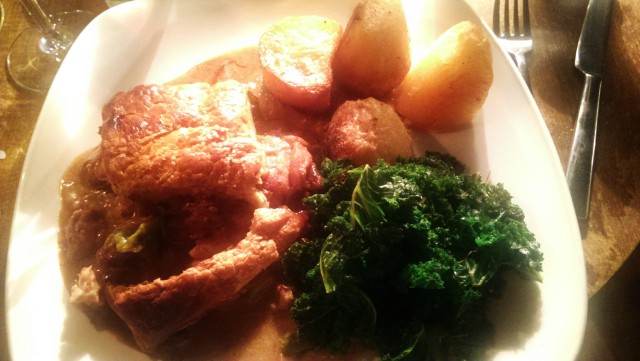 The other main was, despite being on their autumn menu, a wintry and comforting delight. There was so much going on on the plate (or slate in this case, as it happens) that it’s difficult to know where to begin describing it. So there was a confit leg of pheasant – delicious and gamey, if a bit difficult to detach from the spiky, spindly bones. There was a breast, filled with stuffing and rolled almost into a ballotine, rich, salty and herby. There was a big pile of red cabbage, full of the flavours of winter, a giant heap of spiced comfort. There was a root vegetable dauphinoise, so imaginative compared to a bog standard potato gratin, with a whack of garlic offsetting the sweetness of carrot and parsnip. And there was celeriac puree. It was described on the menu as “flavour bursting celeriac puree”, which again I found more than a little silly, but the last laugh was on me because it was exactly that – sweet but punchy, a little went a very long way. Bringing it all together was a little jug of something which was described as “mulled wine sauce” on the menu but just tasted like amazing gravy to me. I smiled from beginning to end while eating this dish: if plates of food were people, I’d have married it.

That main, as it happens, was recommended by our waiter – although, having read the description on the menu, I probably still would have ordered it if he’d said “my one tip is to avoid the pheasant, I’m pretty sure it has bits of asbestos in it”. But the service overall was pretty decent considering how full the place was. There were no empty tables when I got there, no empty tables when I left and the bar got buzzier as the evening went on. What were all these people doing in Sonning, a village which never troubles the national press? Your guess is as good as mine.

I’m sorry to confess that I’ve let you down, because I didn’t order dessert; I just didn’t have space (I blame all that soup) and there was nothing light enough that I could have managed it even after a breather. In any case, the dessert menu is probably the most conventional thing about the pub – brownies, sticky toffee puddings and the like – so I’m not sure I missed much, though I imagine they’d have done it well. Maybe with winter coming I’ll have to get into training to make sure I can manage all three courses. So instead, we settled up and left. The bill, excluding tip, came to sixty-two pounds. Apart from the two courses each we had a couple of pleasant, if unremarkable, glasses of red and a couple of drinks in the bar beforehand (the wine is much better value than the cider: a pint of cider is eye-wateringly close to a fiver). The main courses were definitely more at the restaurant than pub end of the price scale – the pie was fifteen pounds and the pheasant was seventeen pounds – but more than worth it, I think.

I can’t help but feel that the Bull has justified my new approach to picking pubs to eat in. It was a bit of a rollercoaster – I was excited before I turned up, distinctly unconvinced when I got there and then thoroughly wowed once the food arrived. The food was far better than I expected and got the balance just right – close enough to standard pub food not to alienate people who want that sort of thing but with just enough personality to interest people who are looking for a little bit more. What can I say? It won me over. If I lived in Sonning I would come here all the time, and as it is I’m wondering how quickly I can get away with going back. Maybe the village’s newest and most famous resident will drop by at some point; if she manages to get the Elgin Marbles returned to Greece I can’t think of anywhere more appropriate to celebrate.

4 thoughts on “The Bull Inn, Sonning”