At the start of the year, AltReading asked me to contribute to a piece about what people wanted to see in Reading in 2015. So I talked about some of the big gaps in Reading’s restaurant landscape – that we need a tapas restaurant, a pizzeria, a town centre pub doing simple, tasty, well-executed food and so on. It wasn’t until later that I realised that my list of gaps itself contained a gap: Reading doesn’t have a good Japanese restaurant. There’s Sushimania, which can be okay (when it’s not too busy – and woe betide you if it is, because a person can get very drunk on their house white waiting for the food to turn up. Take my word for it) and there’s Yo! Sushi. That’s it.

That partly explains why this week’s review is of a restaurant in far-flung Windsor, the furthest from Reading to date. The thing is, I suspect the reason I didn’t put a Japanese restaurant in my original wish list is that, for years, when I’ve wanted Japanese food I’ve got on the train and gone to Misugo instead. It’s a modest little place just opposite Windsor’s Firestation Arts Centre, about a ten minute walk from the station (a walk which takes you right past a very good fishmonger, a few doors down from the restaurant – something which might explain a lot). It’s nothing to look at from the outside, and pretty understated on the inside. Every time I’ve been (and I’ve only ever been at lunchtimes) it’s virtually empty: it’s rare to see more than one other occupied table. It also happens to do fantastic sushi.

Arriving on a Saturday lunchtime without a reservation, I was delighted to see that they had a booking for a big table, even if it meant that I didn’t get my usual seat next to the window. It’s a long thin room split across two levels and it really is very basic – plain wooden tables, plain wooden stools and simple, elegant (if atmospheric) lighting. But that simplicity feels like a bit of a hallmark which carries across into everything else – unobtrusive service and simple, brilliant food.

The menu is one of those big, tempting ones that requires several attempts in a single sitting (I envied the big table which turned up a little after I arrived – eleven fellow diners would give you the opportunity to try a lot of the options), divided into sashimi, sushi, small hot dishes, rice dishes and noodle dishes. They also do a small, if tempting, array of bento boxes if you want someone to make your tricky decisions for you: I didn’t, but the woman at the table behind me had one and it looked nearly enviable.

First to arrive was the sashimi, which was beyond reproach. If you’re used to Yo with its little dishes, a few small slices of salmon trundling round under a plastic dome on the belt, the sashimi at Misugo – in terms of the presentation, the range and the sheer quality – is like going from a standard picture to HD. So the salmon here came as four beautiful thick slices, beautifully marbled, fresh and clean, as soft as mousse. I’m no expert on sashimi, but I don’t think that marbling and that texture happens by accident or luck. The tuna was firm, meaty and distinctly unfishy (as odd as that sounds). If sashimi has never appealed to you then tuna from Misugo is the perfect gateway fish. Finally, the biggest revelation: four sections of mackerel, complete with shimmering skin. I always order the mackerel and it always blows me away, somehow strong and subtle all at once in a way few dishes (and few people, come to think of it) ever manage. We gently transported them onto our tiger-striped plates with chopsticks, dabbed them in soy, added ginger and popped them in our mouths, and then we were transported ourselves. 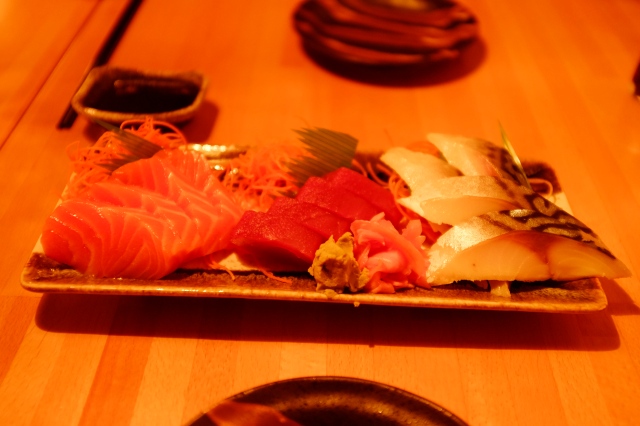 Sushi was every bit as good. Avocado maki were plump things, tightly rolled, each with a big fat core of ripe buttery avocado. But there was more going on: a hint of what tasted a bit like lime, tucked between the rice and the delicious green flesh. Again, this was a world away from anything you might pluck from a conveyor belt. Soft shell crab maki – the crab still warm as it reached our table – were gorgeous to look at, the crab almost looking as if it was making a break for it. All of a sudden I didn’t envy that table of twelve half so much, because it was difficult enough sharing these between two.

The waitress asked if we wanted another look at the menu and saying no felt like the worst kind of folly, so we rounded up more options and ordered again. Vegetable gyoza were gorgeous – lighter than they looked, like crispy islands floating on the smallest, subtlest pool of vinegary dressing. More maki – this time grilled tuna with mango – were also delicious, the tuna soft and the mango fresh and firm rather than soft and ripe as the avocado had been. A little drizzle of sauce over them added a deep, fruity note.

Last of all, the only misfire of the whole meal. Chicken yakitori looked the part – thigh meat threaded like a sine wave onto skewers, grilled, brushed with sticky sauce and scattered with sesame seeds. But they needed to be more: more well cooked – the slightly charred bits were a delight, the rest a bit of a chore – and with more of the gloriously smoky sauce. They were the only thing we didn’t finish, although by that stage we were too full to ask for dessert anyway. Anywhere else, it would have been a good dish, but Misugo had set the bar too high by then. I was sad that they played their worst song as the encore, but I’d loved the concert too much to hold it against them.

Being on the wagon in a Japanese restaurant, it turns out, is less of a hardship than you might think. I was tempted to try Calpico, a Japanese yoghurt drink (and if I’d known it tasted just like Yakult, which apparently it does, I definitely would have) but in the end I opted for something which was described as an “aloe vera soft drink” and tasted a bit like orange squash on a gap year. I liked it enough to order a second, at which point the waitress told me with a smile that you could buy it in Sainsburys, even going so far as to check which my local branch was.

Service was perfectly judged – polite, distant when you wanted to be left in peace but there when you needed it. Nobody at Misugo is ever going to make your teeth itch with excessive – or indeed any – mateyness, and they probably won’t ask whether you enjoyed your food either (most likely because they’re rightly confident that you will). But it was restrained and tasteful, just like everything else. Lunch for two – a total of three soft drinks and eight small dishes – came to £47 not including tip, which I thought was excellent. Even as I left I was wondering why I’d left it so long and when I could go back, and envying anyone for whom this restaurant was their neighbourhood restaurant.

Actually, that last bit might not be entirely true. It’s very tempting, when you eat somewhere great that isn’t in your home town, to say “I wish I could pick this up and move it to Reading”, but on reflection I’m happy to keep Misugo exactly where it is. I like Windsor. I like feeling excited about going there when I get on the train (even knowing that I have to change at Slough doesn’t put me off). I like strolling down Peascod Street, past the boutique called “Cognito” (that always tickles me: as an anonymous reviewer I feel I ought to go in at some point), seeing the fishmonger on St Leonards Road and knowing I’m nearly there. And, perhaps most of all, I like the fact that it’s close enough to get to, but just far enough away that I’ll never tire of it: a balance almost as fine as their food.