Artigiano has changed hands and is rebranding as Broad Street Bar & Kitchen over March and April 2018. I’ve left this review up for posterity.

Let me paint you a picture: one of the reasons the dining scene in Reading can be a confusing place is because many establishments don’t seem to have decided quite what they want to be. So you get indies like Nibsy’s which look so polished in terms of their presentation and branding that you could easily imagine they’re part of a chain on the one hand, and chains like Bill’s that are trying really hard to look independent on the other. When even the Gregg’s on Queen Victoria Street is sporting fake exposed brickwork to try and look bang up to date, no wonder people can feel baffled.

But it’s not just about appearances, there’s also a degree of multi-tasking involved. So we have pubs that do Thai food, wine shops that do charcuterie, cafes that also sell home accessories. Part of it is also about trying to offer something all day to justify those high rents: the chains are good at this, so the likes of Carluccio’s, Bills and Côte will go effortlessly from breakfast to lunch through to dinner, keeping the tills ringing all the way to closing time (everyone’s at it, in fact: this week Pret A Manger announced that it was going to trial serving evening meals in one of its London branches). Part of it though is about trying to widen appeal, and it’s a hard balance to strike – if it works, a place looks like a brilliant all-rounder. If it doesn’t, it has an identity crisis.

Artigiano is a very good example of this in action. It’s a café by day which morphs into an altogether different venue in the evenings, so you can have coffee and sandwiches at lunchtime, tea and a cake in the afternoon and then, as the sun goes down, the emphasis moves to wine, craft beer and nibbles, with a side order of occasional live music. It helps, too, that it’s been so attractively fitted out – all hard wood, smart mid-century inspired furniture and industrial fittings (yes, and exposed brickwork, naturally).

It stands out a little at the less swish end of Broad Street. Get Reading recently wrote a very interesting piece, prompted by Primark’s impending move into the old BHS site, that said the dividing line was anything west of Waterstones – and much as I love wandering round Clas Ohlson I think they probably have a point. So, Artigiano is an independent with the polish of a chain, in one of Reading’s less attractive locations, trying to cover all bases at all times. That’s quite a challenge: can they pull it off?

It was packed when I turned up over the bank holiday weekend looking for a spot of lunch and I could see why. They’ve done a good job of breaking it up into sections with lots of different furniture styles from functional for eating to comfy for drinking. The ground floor, to me, feels a little more sterile whereas the upstairs is much softer and more welcoming (and if you can grab one of the tables for two on the first floor by the window you get a terrific view of Broad Street). They also have quite a lot of tables outside, and the weather was almost nice enough that they didn’t feel ludicrously optimistic.

The lunch options were limited to ready-made salads (in the fridge next to the counter) and sandwiches, which were laid out across the counter next to the range of cakes. Personally I found that offputting: I’d prefer everything to be wrapped or covered as I’m not a fan of sneezemuffins or coughcake. I soldiered on regardless (maybe it’s just me – let’s just say that you don’t want to know how many times I wash my hands every day). It’s very much a café experience – no table service, so the sandwiches were plated up there at the counter and we took a table number for our hot drinks which followed later.

The sandwiches were generally tried and tested combinations rather than bursting with innovation: cheese ploughmans, “New York deli” i.e. pastrami and cheese, falafel wrap (it seems to be a legal obligation for sandwich chains to dish up cold falafel these days even though cold falafel are a sad parody of how falafel should taste). The most interesting-looking one was roasted vegetables with both houmous and sweet chilli sauce – I didn’t order it, I regretted it and then when the sandwiches I did try were both disappointing I consoled myself with the thought that it wouldn’t have been good anyway. We went for a chicken caesar wrap and a chicken and bacon baguette, and the waitress serving asked if we wanted them toasted. I found that plain odd: I can understand lobbing things in a panini press where there’s cheese involved but otherwise it seemed an eccentric move to try and put what is essentially a chicken baguette in a toaster. We declined.

The bacon and chicken roll was labelled as a “chicken club”. As far as I know a club sandwich is usually a double decker on sliced bread whereas this was a single decker wholegrain baguette. The bread was OK – it looked nutty but tasted surprisingly plain (especially compared with the “artisan bread” at Pret or the fresh sliced bread at Picnic, both of which are top notch). Inside was a meagre smear of mayonnaise, a single layer of lettuce, sliced tomato and some chicken and bacon. Both meats – the chicken in disturbingly uniform slabs, the bacon a pair of floppy strips – had the appearance of being pre-cooked catering food and were glacially cold. Artigiano’s website makes much of the quality of its ingredients but it really didn’t feel that way from where I was sitting: I found myself wondering just how freshly assembled this sandwich had been, and more to the point what exactly it had been assembled from. Worst of all, it was so dry, so tasteless and so disappointing that half of it was left on the plate at the end: carrying on would have just been throwing worse calories after bad. 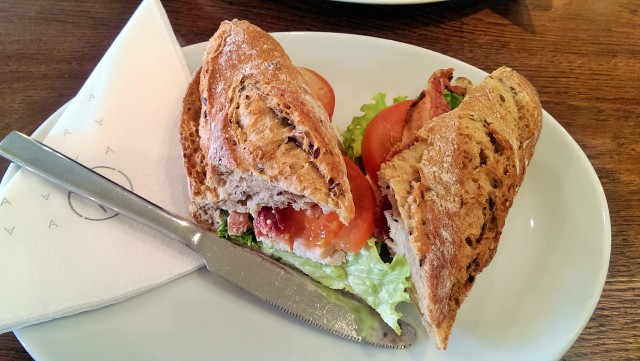 The other sandwich, the chicken Caesar wrap, did get polished off – although that was more a sign of its diminutive size than its deliciousness. It was in two short halves, which were even shorter when I realised that a lot of each end was taken up in a big stodgy clove hitch of tortilla with no filling. As for the filling there was, it aspired to inoffensiveness: the shredded chicken was clean-tasting, if bland, but there was no Caesar dressing that I could make out and certainly no Parmesan. The lettuce was nice enough (although really, how exciting can lettuce get?) and there were some small bits of bacon scattered throughout – less than I would have liked, but by now “less than I would have liked” was becoming a theme.

The suggestion was that this also contained sun-dried tomato, and on a very close inspection I could just about find what might have been the tiniest pieces of sun-dried tomato known to man. The implication seemed to be that they had someone in the kitchen whose sole job was to cut sun-dried tomatoes into almost undetectable pieces: if so, they really need to devote their considerable knife skills (or laser skills – they may well have used one instead) to something else. The only thing that wasn’t less than I would have liked was the cost – four pounds fifty felt like an astonishing amount of money for such a small, ordinary sandwich. The price was also the reason why, although this aspired to be inoffensive, it was destined not to get there. 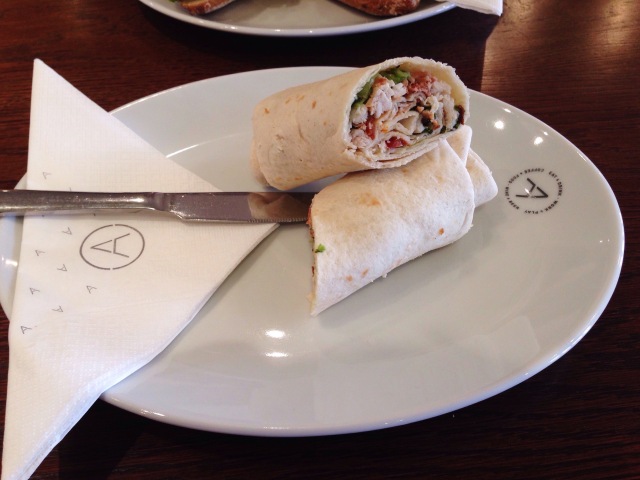 So, that’s all the bad news. The good news is that the tea and coffee were brilliant. The tea was proper loose leaf tea in a sensible, generous pot with a removable strainer basket: I managed to get two decently brewed, un-stewed cups out of this and it was gorgeous, fragrant Earl Grey. I’ve not been to Yumchaa yet, but on current form this is my favourite tea in Reading – so much better and more generous than chains like Pret or indies like Picnic and even Lincoln. I’m reliably informed that the coffee was delicious too – with a hint of liquorice but without any burnt note. It was two pounds seventy five, whereas my huge pot of tea was two pounds thirty. I make that tea one, coffee nil – even if that puts me out of step with ninety-five percent of Reading.

Service was friendly, although most of it happened at the till (and this largely consisted of cutting the sandwiches in half and plonking them on a plate). When the drinks were brought over there was no chirpy “enjoy your lunch” and there was also no goodbye holler as we left shortly after. I’m sure that on previous visits there has been more warmth and welcome, but this time it all felt a bit blank and flavourless. Like the sandwiches, in fact. The bill for two sandwiches and two hot drinks was a touch under fifteen pounds, and we both left distinctly peckish.

So, all-rounder or identity crisis? Visiting Artigiano was a frustrating experience, partly because there’s so much to like and it’s good at many things. The tea and coffee are well worth trying. The cakes, which I’ve enjoyed on a previous visit, are also very good. The selection of craft beers, ciders and wines is rather nice and on a weekday night the upstairs still feels like a cool little bolthole that the rest of Reading hasn’t cottoned on to yet. But I’m not a coffee reviewer or a bar reviewer: I’m a food reviewer, and on that basis Artigiano didn’t work for me. If I wanted somewhere small and independent I’d go to Shed. If I wanted somewhere polished and consistent I might well eat at Pret A Manger. Artigiano didn’t feel like it competed – in terms of cost, quality or service – with either of them. And I haven’t tried Gregg’s, despite the lure of the fake brickwork, but I wouldn’t put money on Artigiano being better than that either. So would I go back for food? Put it this way: Artigiano starts with art and ends with a no, and so does this review.

One thought on “Artigiano”