N.B. By November 2019 the Crown had been acquired by Brakspears and the menu differs considerably from the one I reviewed in 2015. In particular there are no longer any South African dishes on the menu. I’ve left the review up for posterity, but it’s no longer representative of the experience you would have if you ate at the Crown.

This week’s review is sort of me returning a favour. The enigmatic Roast Dinners Around Reading (worth a read if you’re not a regular already: his weekly reviews are probably the highlight of my Mondays – well, that and Only Connect) recently visited one of my top recommendations, The Bull at Sonning, and was a big fan. So it seemed fitting that I try out the Crown, which has occupied his top spot for as long as I can remember. The last time I went there was long before it had a makeover and repositioned itself doing classic pub food with a South African twist, so I wasn’t entirely sure what to expect. And yes, the website talks about freshly prepared, quality ingredients but, well, don’t they all?

First things first, I have to mention the building itself. Pulling up onto the gravel driveway in the dark doesn’t do the outside justice (though there’s lots of smart seating outside which looks like it could be gorgeous in summer – if we ever get one again) so the first impression you really get is when you walk through the door. The welcome – quick and friendly – was nice enough but the interior is stunning; there are lots of big rooms broken up only by lots of beams, some of which could be perilous after a couple of pints if you’re over five feet eight. The dining area is in a rough L shape, with a large barn section at the end literally crowned with, erm, a crown, all wrought iron and grandeur.

As is de rigueur these days, the furniture is shabby chic and mismatched (I lost count of the number of different dining chairs in the barn area – one large table only had a couple which matched at all) and the paint is the very regulation Farrow and Ball. The interior’s been done by the same people who styled Henley’s Bull On Bell Street and it’s every bit as tasteful: I felt like I should have been there in my gilet and Hunter wellies. Having dinner with friends called Pippa and Tarquin, probably.

The menu’s an interesting one which covers lots of bases without feeling overextended. There’s some kind of South African connection (though I’m not clear exactly what) so there are a few South African touches (Boerewors, bobotie, the dubious delights of “monkey gland sauce”) but they’re well integrated. There’s hearty stuff, slightly more sophisticated stuff and a couple of vegetarian dishes (and several salads) – enough range, in fact, to make Brits feel safe without feeling completely staid. It’s a nice balance.

Although the starter menu was full of temptation (more so than the mains, I thought) boneless ribs stood out as something I rarely see and, in truth, an invention I think the world has long been waiting for. I don’t mind ribs, but it’s impossible to eat them with any dignity and there’s always that moment of trepidation when you take the first bite – will it come away neatly and easily, or will you be left gnawing away and embarrassing yourself, your dining companions and, most likely, people at the next table? That’s before we get to the mess – there’s always mess, and there’s always more mess than you think there will be (which reminds me, must buy more wet wipes).

I was delighted when they turned up, because they just looked pretty. Presentation seems to be a strong point at the Crown – it was attractive enough that you wanted to eat it but not so aesthetically precious that you felt like you were ruining it. What I soon realised is that boneless ribs don’t resemble ribs at all – durr, the clue’s in the name – so if anything they were like small slices of belly pork and none the worse for that. I really liked them – tender, tasty, no bounce, artfully drizzled with glaze. On top was a heap of red cabbage which was packed with cloves. I liked it, because I like cloves, but it was only just the right side of the line between really good mulled wine and overpowering Yule-themed Yankee Candle. Oh, and the salad was not only pretty but edible, with little cubes of tomato and some attractive shoots on top. Not only was it edible, but I actually ate it, and you can’t say that very often. Good work all round, I feel.

The other starter, hot smoked salmon was even better; a great big cylinder of it, all salty and smoky, was served with some sliced bread which had been generously oiled, garlicked (I think I may have just verbed a noun: sorry about that) and chargrilled, a little pile of salad, four little dollops of herbed crème fraîche and best of all, some slices of preserved lemons. It might sound busy in theory but it wasn’t in practice – and it was much prettier than my terrible photo would have you believe.

To be honest, the crème fraîche got rather lost against the salmon – I think it had dill in, but there might have been some parsley – so it needed the tangy, vinegary lemons to lend some zip and oomph to proceedings. Adding a bit of that lemon to a forkful of the salmon was a bit like putting Worcestershire sauce on your baked beans – once you’ve done it once it’s hard to imagine the dish without it. A cracking start: generous, just a little bit cleverer than it needed to be and with so many flavour combinations that it never got boring.

For mains it seemed absolutely right to have a South African special. The Bobotie (which I later discovered is pronounced beau booty, although I, mistakenly but enthusiastically, said it as bobot-yeah! instead) didn’t grab me on the menu but I am glad I threw caution to the wind and tried it. Out came a wee cast iron dish filled with minced meat (beef, I think, although it could have been lamb, or both) mixed with spices, sultanas, flaked almonds plus tiny pieces of ref pepper. On top of all that was something which looked like cheese but was in fact a layer of whisked egg which gets baked when the whole thing goes in the oven, sort of like a savoury custard.

It was so good – like nothing I’ve eaten before, intensely flavoured, sweet and rich with lots of complexity and a little heat. Really lovely stuff. Eating it, I found myself wondering if it was close to what mincemeat might have been a couple of hundred years ago (Google says yes, incidentally). It didn’t really need accompaniments – I would have been delighted with this on its own – but it came with some anyway – some very plain (allegedly saffron) rice and a prettily pleated poppadum. Just in case there wasn’t enough flavour there was a small pot of some of the spiciest mango chutney I’ve ever eaten and some fresh tomato salsa that, a bit like the herbed crème fraîche in the salmon starter, didn’t stand up to the rest of the dish.

I promised myself at the start of the year that I’d order one vegetarian main course every month, and with the exception of the month where I spent half of it on holiday I’ve kept that promise. This was likely to be my last meat-free main of the year, and I realised it was time to confront the ever-present on menus, the vegetarian main course you really can’t escape. Yes, just as Mario inevitably has to face the end of level baddie, there was no chance of me getting to the end of the year without ordering the mushroom risotto. So I did.

Unfortunately it was probably the only duffer of the evening. Again, it looked good on paper; wild mushrooms, lemon thyme and truffle oil were all namechecked, but what turned up needed to be half as big and twice as interesting. The mushrooms were wild – no trades descriptions issues there – but there was so much rice that they were drowned out. So much cream, too, with no seasoning to bring the flavour out in anything. There was enough truffle oil that you smelled it when it arrived at the table but after that nothing, a bit like those strangely flavourless herbal teas that you get. No lemon thyme either that I could see, just some rocket. Finally – and this didn’t bother me but I imagine it would many bona fide vegetarians – I’m pretty sure there was parmesan on top. In many ways, this was a fitting final vegetarian main course of 2015 because it highlighted how frustrating and difficult it must be: if a place like the Crown, which got so many things right, still couldn’t deliver a good mushroom risotto, what hope was there for everywhere else? 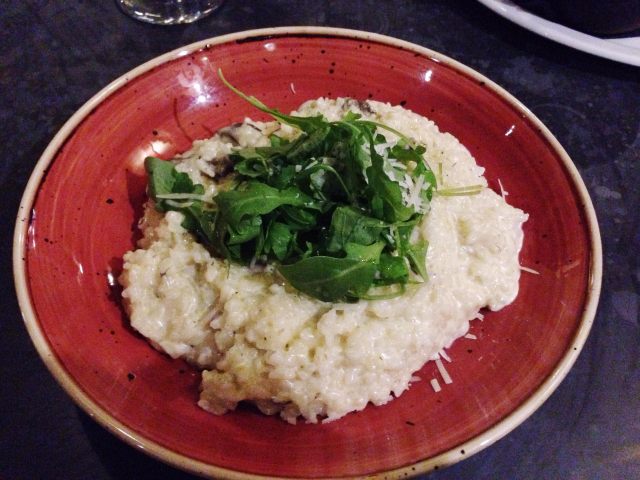 There was no chance of dessert after such big main courses and, to be honest, the dessert menu plays it far safer than the other two courses (cheesecake, Eton mess, banoffee pie, you know the drill by now) so I didn’t feel like I was missing out. Drinks were nice enough – a glass of South African red which was pleasant and everyday, but not wildly exciting and a bottle of Fever Tree bitter lemon which was very nice, albeit a little small. Dinner for two – two courses and a drink each – came to just under fifty pounds, not including service.

Speaking of service, it deserves more of a mention: I think at various points in the evening we were looked after by three or four different people and they were uniformly excellent, just informal enough to be engaging but never over-familiar. The young lady who took our money at the end was a particularly good ambassador, enthusing about the restaurant and talking about some of her favourite dishes (including the bobotie – no surprise there – and the steak). It was pretty busy, too – despite being a week night quite a lot of tables were occupied which is pretty good going for a location out of town. I think I heard a couple of South African accents, also a positive sign.

Despite the South African influences The Crown feels archetypally English in a Richard Curtis sort of way; the interior is beautiful, the staff are all lovely and much of the food is really good looking. I half expected it to be more style than substance (like Love Actually – that’s two hours of my life I’ll never have again) so it’s lovely to be able to report that there’s more depth to it than that; the food (with one exception, sadly – probably not one for vegetarians) was both tasty and interesting. Perhaps it reflects the growing competition in the area between Reading and Henley where there are plenty of options, but if anything, The Crown was better than I expected it to be: better food, better presentation, a better dining room and better service. You know what, I think that Roast Dinners bloke might be on to something. Extra gravy, anyone?

8 thoughts on “The Crown, Playhatch”