One of my biggest gripes about Reading is that there are limited options if you want a really good breakfast. I’m talking about crispy, smoked streaky, really good quality sausages, excellent toast, perfectly poached eggs and mushrooms by someone who knows how to cook them into sticky, salty perfection. Oh, and HP Sauce (I know some people like ketchup with breakfast, but then some people like Nigel Farage. It takes all sorts, I guess).

Ironically, your best bets tend to be the chains. And they’re not too bad, I suppose – Cote does a pretty good breakfast, especially their French version with a generous helping of crumbly boudin noir. Carluccio’s used to be top of the heap for me with their resolutely Italian take – thin translucent strips of pancetta, gorgeous wild mushrooms and herby, soft scrambled eggs with ciabatta toast – although recently they’ve tried to Anglicise it by slipping in an incongruous banger. And if you like that sort of thing, Bill’s has a lot of fans, although I’ve always found their breakfast a bit underwhelming.

Most of the independent places in the town centre fall down on the quality of their ingredients – bouncy sausages and pink rubbery bacon are the main culprits here – so I decided to act on a tip-off and drive out to a farm shop a short distance outside town. And it was going well until I bounded up to the counter only to be told that they’d stopped serving at 11.30 (brunch clearly wasn’t a word in their dictionary). Then I remembered that Picnic had recently started doing a Sunday brunch menu, so I did an about turn and headed back into town to give it a whirl.

Picnic is the grand dame of Reading’s lunch scene. It was truly trailblazing when it opened way way back in 2007, and since then it’s been pretty much packed every lunchtime, serving sandwiches, their legendary salad boxes (which change every week, so you need to check their excellent Twitter feed for details), pasties and sausage rolls from Green’s of Pangbourne and all manner of cakes to the discerning populace. They had a refurbishment earlier this year which changed the layout and gave them more working space, and I got the sense that this was to enable them to try some new things – including their brunch menu, veggie burgers and a wider range of salads (they’ve even bought a slicer and are serving charcuterie in some of them). So has that gap in the indie breakfast market finally been filled on Market Place?

Let’s start with the curmudgeonly, change-resistant bit: if I’m honest, I preferred the old layout. I miss the benches all along one side and all that space at the windows, looking across to Munchee’s and watching all the passers-by. Then it was cosy in an all-in-it-together way, now it feels a bit cramped and noisy and cluttered. Still, if it gives them a space to offer a top-notch brunch selection (among other things) it has to be a positive development, right?

They don’t offer a full-on English breakfast, so instead I went for a bacon sandwich. Picnic’s menu boasts that this is locally smoked and you can’t complain about the quantities in the sandwich – the sort of thickly-packed stack of dead pig that would give the World Health Organisation conniptions. The bread was toasted granary and there was a decent smudge of brown sauce in it. It should have been perfect, but what let it down was that only the bread was hot; the bacon was warmish, and I got the distinct feeling that it hadn’t been cooked to order. Perhaps this is unreasonable of me, but for me half the fun of a bacon sandwich is that the bacon is sizzling fresh off the grill and stuffed into the bread, juices melting into it, all crispy and piping hot. This sandwich was quite nice, but it wasn’t that – and if I’d known that I might have gone for something else. Oh, and the napkin had been unhelpfully stuck right under the sandwich (always a bugbear of mine). 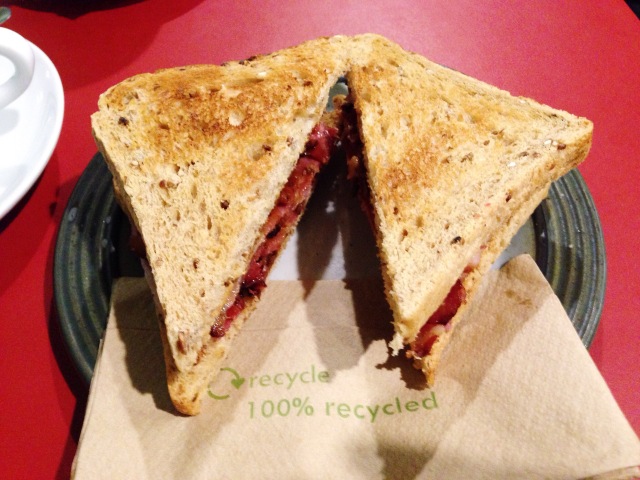 The other dish was avocado, tomato and harissa on toast. The London style of smashed avocado (with all the requisite extras like lime juice, fresh mint or chilli, all on a nice slice of sourdough) totally hits the spot for me so I fancied seeing what the closest alternative is out here in the provinces. The offering at Picnic was much simpler – a single piece of toast (granary, but thinly sliced enough to appear to be from a “normal” loaf, sadly) spread with harissa, with tomato and half an avocado fanned out on top. There was a bit of dressed salad on the side, which felt a bit like it was hiding the fact that there wasn’t much on the plate (and who has salad with brunch, really?).

The avocado was a little on the firm side – I like it closer in texture to butter than potato, personally – and the tomato was just a bog standard round tomato but the harissa added an extra dimension. The chilli heat and the sweetness of the spices brought everything together and made it a bit more interesting (and it’s an idea I will definitely use in anything I ever get round to cooking at home) but still, it was half an avocado to which nothing had been done, some tomato and a one slice of bread, rather than the mashed avocado and sourdough I had ordered in my head. For a fiver it felt like it was bordering on cheeky. Still, at least they didn’t put the napkin under the bread.

Brunch would be nothing without a nice hot beverage. Mocha was pleasant, though more chocolate than coffee, and Earl Grey was decent (but it’s hard to mess up a bag in a cup of water – though lots of baristas will have a bloody good go). Service is minimal because there is no table service, but the young ladies (and it is exclusively young ladies working here, except for the owner. He’s like Reading’s answer to Bosley) are really friendly, extremely helpful and very nice indeed and the tables here are cleared regularly, as you’d expect – but not always get – with a high customer turnover. The total bill came to just under fifteen pounds for brunch and a hot drink each. Not a huge amount of money, but perhaps expensive for what it was.

Realistically, whatever I say about Picnic in this review it won’t make anyone go there who hasn’t, or stop any regulars from going back. Which is as it should be, because it’s a local institution which has done as much as anywhere else in town to shape the way people in Reading eat. And it’s still a favourite of mine for sandwiches, (goat’s cheese, honey and walnuts is one I keep going back to), salads (ditto for the peach, mozzarella and parma ham), soup (pea and blue cheese!) and the occasional shameful Cornish pasty. It’s tough being a trailblazer, because people expect you to keep doing it – and I know how they feel because, like Picnic, I was the future once. Perhaps, instead of being slightly critical about the food I should applaud the ambition, because despite finding the brunch a tad disappointing I can’t help but be impressed that, after nearly a decade, they’re still trying something new.