I sometimes envy other restaurant reviewers. Michelin has its stars, the AA has its rosettes, even the much-maligned TripAdvisor has its Certificates Of Excellence. And what do I have? Just a bunch of ratings nobody really understands which I’ve consistently refused to explain (“What do they mean?” said a friend of mine down the pub recently. “I mean, seven point five, what’s all that about?”). Well let’s not go through all that again but there’s one exception, and that’s what I call the 8+ Club: without giving too many trade secrets away, a rating in that range means a place is really, really good. Go again good, plan your next visit good, evangelise to friends good.

Sometimes, when I eat out on duty I find myself mulling over what elevates a restaurant or a café into that select few, and as you can see if you’ve scrolled down to the bottom already (and own up, lots of you do) that was very much on my mind when I visited Royal Tandoori. Almost, but not quite. Right on the edge. I changed my mind several times during the meal, although that in itself never bodes quite well enough. So what went wrong? Why is Royal Tandoori just very good, rather than great?

For the uninitiated, it sits downstairs in the slightly ironically named “Quality Hotel” (I suppose it doesn’t specify whether it’s good quality or bad quality) and – as proudly proclaimed on the the menu – has done since 2008. It’s in town but not quite in town and yet it always looks full on the occasions when I pass by – in fact I was lucky to get a table, judging by the number of big groups that were in (on a school night, too) and the amount of hushed staff discussion that went on before they decided they could seat me. It’s a large, long room and I think they’ve spruced it up since I was there last: I may be imagining new windows, but I’m pretty sure the large black and white Bollywood stills papered onto the walls – which I rather liked – weren’t there before. The menu, though, was every bit as huge and bewildering as I remembered.

The starters were pretty darned good. Gobi Manchurian, a dish I’ve had elsewhere in Reading, was miles better here, little nuggets of battered cauliflower in something almost like an Indian barbecue sauce – sweet, sticky and spiced. It tasted so terrific that I found myself not caring that the cauliflower was ever so slightly soft and that the batter had no crunch. The best dishes can make you suspend your disbelief like that, and the only real drawback was how much I resented having to share. Jeera chicken was also top notch. It was very tender pieces of chicken breast in a spiced sauce – so far so blah – but covered in cumin seeds, somewhere halfway between a speckle and a crust. How I loved this: I adore cumin, and eating a mouthful with the sauce piled high and the pungent crunch of those seeds made me go quiet and nod an awful lot. 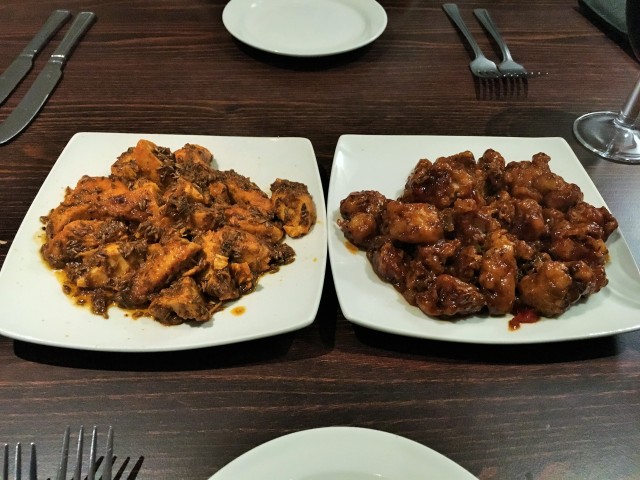 I was quite enjoying drifting in a cumin-infused daydream, but sadly my reverie was interrupted far too soon by the arrival of the main courses. I’d had reports of the chicken chettinadu (like nothing else in Reading, according to one reader – hi Chris!), so I felt it would have been remiss not to order it. Well, it goes to show how little help photographs are when you’re reviewing this kind of food. Like one of the other starters and the other main, it was just meat in an orangey-red sauce (and yes, I know I always say this) but the flavour was indeed complex and unusual, all black pepper and curry leaves, nigella seeds and a sharp hint of citrus which came from I know not where. It also had that clever heat which sneaks up on you rather than beating you about the tastebuds – 3 out of 4 on the International Scale Of Chillies (or ISOC for short) used by many Indian and Thai restaurants, although the only thing with an ISOC rating of four was “devil lamb”, which sounds like something you might see on a terrifying cross between Springwatch and Most Haunted.

I do like a dish that’s interesting, and this fitted the bill perfectly. The first mouthful established that it tasted different. The second mouthful established that I wasn’t entirely sure how. For all the other mouthfuls I was fed up of analysing and too busy enjoying. But it wasn’t perfect, for all that – mainly because there wasn’t an awful lot of meat. The big bowl of sauce I was left with was good for dipping and pouring, but it still felt a tad unbalanced.

The other main, lamb Hydrabadi (ISOC2 – handy!) was just as good. Despite looking very similar, it couldn’t have been more different. The lamb – and there was loads of it – was rich, intense and cooked beyond the point of having any give at all: if it had had any less integrity it could have been the subject of an OK! magazine photoshoot. But the sauce was what made this dish – smooth and spicy but shot through with the sharp green surprise of mint leaves. I know lamb and mint is a classic combination, but seeing it in this context was incongruous and comforting at the same time, and I loved that slightly altered perspective. Neither main had much – or, to be more accurate, anything – in the way of vegetables, but it was hard to care (sorry vegetarians, I’ll be back doing meat-free mains again very soon). 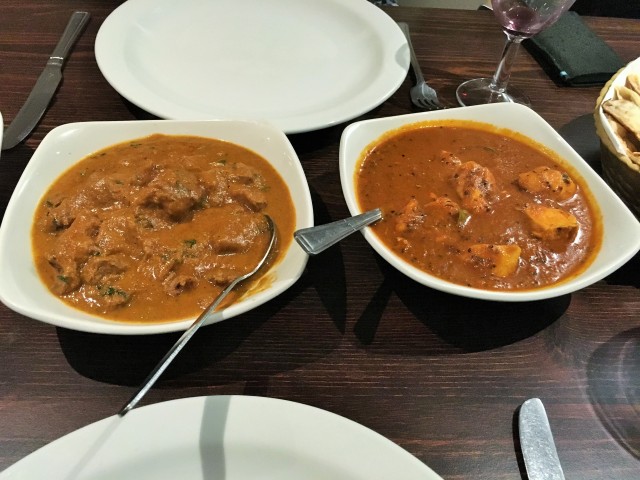 The plain rice on the side was exactly that – although it was a bit clumpy, which made me wonder quite how it had been cooked and when. The butter naan though was interesting in that it wasn’t the big pillowy bicycle saddle of a naan that I’m used to. Instead it was light, thin, almost pizza-like. I really liked it, although I did find that with that and the rice there was sauce left at the end which I couldn’t scoop or mop. Who ever finishes a meal in an Indian restaurant and says “that was nice but I could have done with some more carbs?”. Me at the Royal Tandoori, it turns out.

We did manage to find space (and eventually manage to find some staff to order with) for dessert – and dessert, for me anyway, meant gulab jamun. The texture and the flavour were perfect, the sugar syrup had a clear note of rose water and there were a few chips of pistachio in the bowl too which I appreciated (I am starting to become a connoisseur, I reckon). But there was one drawback: the kitchen didn’t seem to be able to decide whether to serve them hot or cold and so they were neither, coming instead at a slightly jarring off-room temperature. Mango lassi (ordered as an alternative to dessert by my companion) was very good – normally the smoothness would be off-putting but apparently it was silky, sweet and delicious. Almost like caramel, I was enthusiastically told.

It wasn’t a Cobra kind of evening so we tried a couple of the red wines by the glass – a merlot and a shiraz. They were pleasant enough to drink but not nice enough to remember, which is as much as I was hoping for. The total bill, for three courses and a glass of wine each, came to fifty pounds not including tip. Service was friendly when they were there, but only when they were there. When they weren’t it seemed impossible to attract anybody’s attention and the overall atmosphere was oddly downbeat (maybe they were huge Wogan fans).

By any standards, Royal Tandoori is a good restaurant. Everything I had tasted good, everything I had tasted distinctive and some of what I had tasted quite unlike anything else I’ve had. Not only that, but I can see where it would win out over other Indian restaurants in town – more consistent than Pappadams, more central than Bhoj, maybe slightly less chaotic (and better with big groups) than House Of Flavours. More than any of those places I could see myself going there with a gang of work colleagues, all ordering different things and having a lovely time. But it doesn’t quite cross the line into great – the service was just a little too patchy, the food a little too rushed, the dishes just a little lacking in balance. But really, this score malarkey: who cares? Very good is plenty good enough most of the time. You’ll read this review, irrespective of the number at the bottom, and you’ll either want to go there or you won’t. Which is exactly how it should be.