It happens less than it used to, but every now and again I still review somewhere because of a recommendation or a request from a reader. You have Anna to thank for this one, because a month ago she left this comment on the blog:

This might seem like a weird suggestion, but how about trying the new Jamaica Blue cafe at the Royal Berkshire Hospital… Looking at their website it seems like a successful Australian chain, they have only four branches in the UK. I’ve popped in a couple of times after appointments and the coffee was great. I was very pleasantly surprised by the range, quality and freshness of their lunch options, really nice deep filled flans and unusual sandwich/ciabatta choices. So nice I’d even consider dropping in if was in the area and I didn’t have an appointment.

My curiosity was piqued. Partly because this was a hard sales pitch to resist: a promising new café in town that almost nobody knew about? How could I stay away? But more to the point, I live very close to the hospital, and many’s the time working from home that I’ve sloped up the Craven Road to visit the AMT just inside the main entrance. If the weather’s bad I have a Café Maya, and if the weather’s good (by which I mean anything above twelve degrees with no rain) I have a Froffee, that hypnotic, magical milkshake made with ice cream, espresso and dreams. But I never get any food there, and Café Yolk never quite feels worth the additional walk. I made a mental note: next time I was working from home I’d go to Jamaica Blue and try it out, a rare solo excursion.

It’s odd going for lunch in a hospital, you know. It’s odd using the hand sanitiser on the wall-mounted pumps and going down long corridors lined with art best described as enthusiastic, dodging the beeping buggies that sedately trundle past you. It’s odd walking past the queue for the pharmacy, past the fracture clinic, past Respiratory Medicine. For someone with a touch of hypochondria like me, all those department names read like Panini stickers you’re yet to collect: got, need, need, need.

What’s also odd is reaching the spot where Jamaica Blue is, by South Block Outpatients, near where they do the blood tests, and seeing what looks like an actual proper café just plonked in the middle of a hospital. On one side of their stylish blue partition it was all people waiting for appointments at grim, municipal-looking tables. On the other side, people were sitting at much more fetching tables in comfy chairs, tucking into food. Snazzy brass-effect light fittings hung from the ceiling and a range of canvasses on the back wall spelled out the range of coffees on offer. Were these people actually ill, or just gastronomic tourists like me? Was everybody else in on the secret? Or perhaps this was just a mirage, an oasis among the sand dunes stretching out for miles. 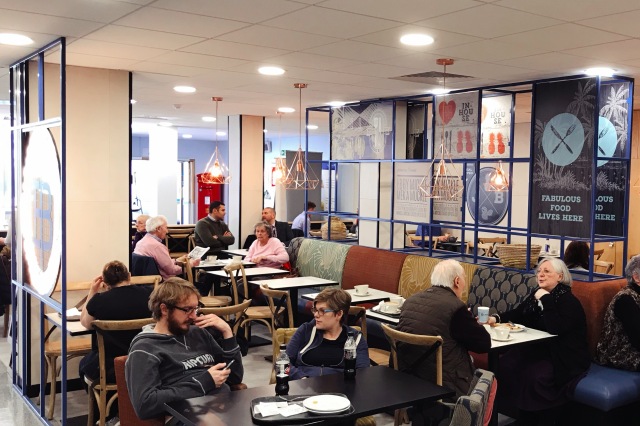 A small queue was forming at the counter so I took my place and looked at the embarrassment of riches in the cabinet. Anna was right – many tempting things were there. An antipasti focaccia looked like it might be the real deal rather than, as so often, a ciabatta using a fake ID. The ciabattas and bagels appeared pretty standard issue, but there were plenty of other interesting options. I considered the tortilla stack, the deep feta flan and the sausage rolls (I considered the sausage rolls for some time, in truth) before narrowing my choice down to a binary one just as I got to the front.

“What’s in your chicken pasta bake? Do you heat it up?”

“Yeah, we definitely heat it up. Hold on.”

She went to fetch someone to talk me through what went in to the chicken pasta bake. It was a big, appetising-looking slab and I could see chicken and tomato through the cross section. A friendly chap came up to the counter and explained to me everything that went into one, in such exhaustive detail that I couldn’t possibly remember it all. I did remember one phrase though, which stuck with me: “There’s cheese at every level”. A lovely sentence to apply to food (if less so to, say, a nightclub).

“And your croque madame, is the egg cooked to order?”

“Of course it is” came the reply, making me feel ever so slightly stupid for asking. But I’d have had to ask in a Costa I wanted to say, but it would have sounded peevish. Besides, Costa would never do a croque madame.

“I’ll have the croque madame.” I said. The gentleman behind me, having heard the sales pitch, ordered the chicken pasta bake. I made a mental note to try and avoid sitting near him, in case of food envy.

“How long have you been open?” I asked one of the ladies behind the counter as I waited for my coffee to be made.

She smiled as if she was asked this often. “Maybe we’re just here to make people’s trips to the hospital more pleasant.” Again I wondered: was this whole thing some kind of dream sequence? Everyone serving me was so pleasant, so happy and, seemingly, so proud to be dishing up possibly the only decent food in the Royal Berks (I was surprised, heading home afterwards, at how full Pumpkin was).

I took a seat at the banquette with my coffee and waited for my sandwich to arrive. The latte was beautifully presented, nicely smooth and had a slightly bitter note but was on the right side of burnt. Jamaica Blue make much of their coffee – and you can buy it for consumption off the premises – and I liked my latte a lot, although it didn’t quite reach the heights of a Tamp or a Workhouse. An older couple next to me had got freshly squeezed orange juice and were rhapsodising about it.

“That’s so lovely, it tastes of real orange” he said. She took a sip of hers and let out a contented sigh in agreement.

“It’s nice in here” she said. Maybe that staff member was right: how often did anybody say that in a hospital?

My croque madame took long enough that I could be completely satisfied that they’d taken their time over it and done things properly. It looked quite gorgeous – good bread, well toasted, an egg (poached, not fried) perched on top and dusted with what looked like smoked paprika. Only the big pile of rocket – somewhat the Scrappy-Doo or Godzuki of the dish – jarred slightly.

Cutting into it, I was even more impressed. Good quality, thick ham, nothing processed or reformed about it. A delicious gooey mixture of cheese and mustard, forming a punchy, claggy layer at the bottom. It was, not to put too fine a point on it, a proper madam. It felt like a bargain at four pounds ninety (although the sign had said it cost 4.9: you can tell what kind of café it is when the price is to one decimal place, the man behind me in the queue had said, and I think he had a point). If I was being fussy, the top should also have been covered in the cheese mixture, or at the very least brushed with oil to give it a gorgeous, burnished quality. If I was being fussy, for that matter, I’d have done away with the rocket.

But I didn’t feel like being fussy, I felt like finishing my croque madame and working out what to order next time. I gazed at the blackboard with drinks, and all I could see was excuses to visit again. Chilled lattes! Milkshakes with real ice cream! Granita! Most tempting of all, affogato!

“Look at that” said the older gentleman at the table next to me as his panini arrived. “It’s oozing with cheese.”

A solo lunch cost eight pounds and for that I got a croque madame, a large latte and – to my surprise – a new place to come for lunch when I work from home.

Jamaica Blue definitely won’t be for everyone. It’s the wrong end of town for many, and I know quite a lot of people would be too freaked out by hospitals to consider setting foot in one unless they had to, let alone eating in one. But, all that aside, I liked it very much. I admired the bloody-mindedness of doing food like that in a location like that, and as one of the more unusual places I’ve visited in nearly five years of doing this blog I almost think it deserves a visit for novelty value alone. It’s even open seven days a week, so perhaps the next time I go to the excellent local food market in St Luke’s on Erleigh Road I’ll just have to stop there for brunch on my way.