I remember being irked when Comptoir Libanais opened in its fancy new space on the Oracle Riverside. It felt like such a lazy attempt to steal custom from my beloved Bakery House: didn’t the people going there know that just across the IDR you could get much better, far cheaper Lebanese food from a proudly independent restaurant which had been there for years? Was being able to drink really enough consolation for such underwhelming food?

In reality, perhaps I was just peeved by another chain opening in a town which really doesn’t need any more. I certainly wasn’t so annoyed when Bakery House itself opened, when there was already another Lebanese restaurant in town (La Courbe, which did good food but never quite transcended being a big glass box that did good food). This crossed my mind this week when I decided to visit Da Village, an Afghan restaurant which opened in January on the Oxford Road, literally a handful of doors down from Kobeeda Palace, an Afghan restaurant on the Oxford Road. Couldn’t they have opened somewhere else? I remembered when I first got reports of it opening, at the end of last year. “Oh God” people on Twitter said, “Kobeeda Palace must be closing.”

“I suppose there can only be a few possibilities” I said to my friend Yasir as he drove us to the nearby Tesco car park. “Either there’s such a big Afghan community that it can support two restaurants, or they’re really going after Kobeeda Palace, or they’ve made a huge misjudgement.”

“I guess so” said Yasir, pulling into an empty space. I’ve known Yasir for years – we first worked together over fifteen years ago, and in the intervening time both of us have done a very patchy job of growing up. Yasir’s family are from Islamabad, not that far from the border with Afghanistan, and he knows that cuisine better than most people I know. Not only that, but he makes some of the best kofte kebabs I’ve ever tasted. If anybody was the right person to test out Da Village with, it was Yasir.

“By the way, when you say the words ‘Da Village’, do you think of…”

The windows of Da Village are tinted so you can’t see in, so I was surprised when we went in to find it was a pretty nice space, pleasingly spacious with pretty big tables. The chairs looked comfy too, although when I tried to pick it up by the handle at the top of the backrest it came away in my hand: impressive going for a restaurant barely three months old.

But anyway, it was a nice room. There were some hanging plants breaking the room into smaller sections, tasteful lighting and some art along one wall – a selection of pictures of landscapes, a quote by Alexander the Great saying “God must have loved Afghans because he made them so beautiful”. That was superimposed over the classic National Geographic portrait Afghan Girl, which I’d seen many times but not realised was connected to Afghanistan.

“I’ve seen that photo before somewhere.” I said.

The eyes followed you round the room, which was no mean feat when you were in the same seat throughout the meal.

The other thing that wasn’t a hundred per cent clear was whether Da Village was a takeaway or an eat in restaurant. The menu blazed away on big screens above the counter but when we asked the waitress ushered us to sit down, so it transpired that it was both. The menu was wider than that at Kobeeda Palace, with kebabs and wraps, burgers, food from the grill, curries and biryanis. Yasir and I quickly came to an agreement to eat three meals between two and pretend one of them was a starter, the by now traditional approach of passing off greed as research. We slurped at a mango lassi each as we waited for our food to arrive – pretty good, but I wished you could buy a jug of the stuff, like you could at Kobeeda Palace for not much more money.

I’d really wanted to try Da Village’s interpretation of chapli kebabs, having enjoyed other versions in the past. It’s a dish technically from the border between Afghanistan and Pakistan – flattened, fried lamb kebabs absolutely studded with chilli – and I had a good feeling about them as soon as they reached the table.

I wasn’t wrong: if I’d liked them before, I truly loved them this time. They managed to marry the outer crunch perfectly with the firm, coarse centre, tender without being dry. They came with salad, a naan and three dips and assembling mouthful after mouthful was so enjoyable that I only realised partway through how effectively the heat had crept up on me and started dabbing my nose with a second napkin.

One dip was a deep red hot sauce, with a little smoke and pungency, but better was the verdant green dip which combined sweet mint and a little chilli. The naan was suspiciously circular and lacking in bubbles or airiness, and that made it difficult to use to scoop and dip, but it tasted nice enough. We happily ploughed through a kebab each but in the back of my mind I was thinking that I would gladly come back and have a couple to myself, especially for the princely sum of eight pounds.

“These are as good as any I’ve had in Reading” said Yasir, whose capacity for heat was unsurprisingly greater than mine. We also had a starter, “Da Village hot potatoes” which was simply some cubed fried potatoes served in the same red sauce that came with the chapli kebabs. They were okay, but the potatoes were waxy, too firm and a little undercooked, without enough of the texture of a really good fried potato.

“There are a lot of desis in this restaurant” said Yasir. “That’s a good sign.”

“That’s useful to know – I always worry about saying there are lots of Indians in a restaurant in case it sounds a bit, I don’t know, colonial.”

Yasir looked at me as if I’d said the stupidest thing on earth.

“There’s absolutely nothing wrong with saying a restaurant is full of Indians.”

“It feels like such a minefield. I’ve been criticised in the past for that kind of thing. And anyway, you’re always joking about taking bombs on holiday and you refer to anybody who isn’t a Muslim as an ‘infidel’. Are you the best judge of these things?”

He grinned wolfishly. “Possibly not.”

Yasir’s main course was a double kobeeda kebab – a kofte, as it’s otherwise known. As a Muslim, Yasir can only eat halal meat but, for reasons best known to him, he refuses to eat most meat because he doesn’t like the texture. Or, as he used to put it when we worked together, “I can’t have solid meat in my mouth but I do love mince” (and if at this point you’re imagining Larry Grayson I’d say you’re not a million miles from the truth).

He generously let me try some of his kofte and I liked it very much – very firm and coarse and perhaps not as wet and pappy as it might be at other establishments. Ironically, that’s why Yasir preferred the kobeeda from a couple of doors down: it takes all sorts, I suppose. It needed more sauce (and perhaps we should have asked for some, given that we’d used most of ours on the chapli kebabs) but it was still tasty and excellent value at nine pounds. The rice it came with was pleasant enough, but not in the same league as at, say, Bakery House.

I had chosen the karahi chicken, as my reference dish in Afghan restaurants. It came to the table with all the sizzle and steam you could hope for, and it looked the part. But it was, on some levels at least, all mouth and no trousers: the sauce lacked depth and complexity and was more peppery than spicy. I would have liked some ginger in it, or heaps of coriander, but instead it was a very glossy and extremely oily sauce that did all its shouting up front without enough to back it up.

The meat was on the bone and some of it was very easy to get off – some pieces, on the other hand, had so little meat that it hardly felt worth the bother. They brought another naan with the karahi and this dish was where it really disappointed – not enough lightness or flexibility to allow for the proper scooping that would have transformed the experience. 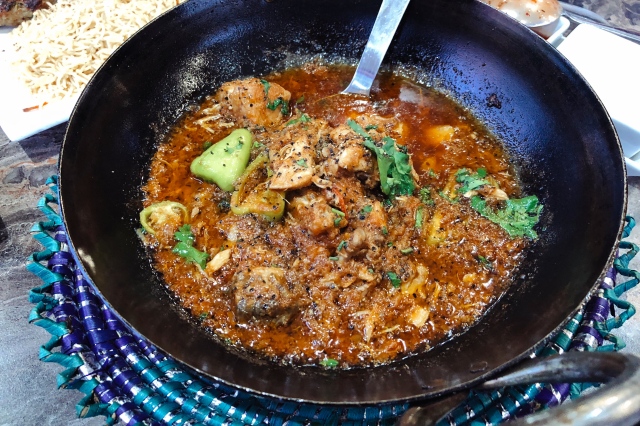 Our mostly-empty plates sat in front of us for some time after we admitted defeat, during which time the restaurant started to fill up with friends and families. Our waitress, who had been lovely all evening, rather forgot about us at this point, although she did eventually bring the bill when we waved her down and boxed up some leftover kobeeda and chapli kebab for Yasir’s lunch the next day. We didn’t mind: it was nice to catch up, to gossip and to reminisce. Around us plenty of buddies were doing the same, and if they thought we were misfits they certainly didn’t let on. Our dinner for two – more food than we could eat and a couple of mango lassis – came to thirty-three pounds, not including service.

“I wish I could have the chapli from this place and the kofte from Kobeeda Palace in a single restaurant” said Yasir. “And the sauces from Bakery House! I really love their orange chilli sauce, I could eat that all day.”

“I love the chapli here too, but I preferred the kobeeda here. But the karahi chicken at Kobeeda Palace is miles better.”

We argued the toss a little longer – designing our own little Top Trumps deck of Reading restaurants – and not for the first time I found myself thinking that restaurants are often about compromises. You rarely get everything you want in a single package, but that’s even more complicated when your closest competitor is literally the closest – a few doors down and offering the same dishes, in a slightly different way and at a slightly different price.

I can imagine there are people out there who have never been to Kobeeda Palace and might chance upon Da Village first, drawn in by the slightly fancier exterior. Maybe they would like it better, because you never forget your first love. Maybe they’ll be the Coke and Pepsi of Reading’s Afghan restaurants, and everybody will have a different favourite. I liked Da Village a lot, and some of its dishes are definitely better than their Kobeeda Palace equivalents. But I’m a sentimental soul, and will I ever really stop at Da Village when I could walk another minute down the Oxford Road and go to the original and best? I don’t know: maybe two or three times out of ten, and maybe not. Perhaps we should just be glad that Reading has two decent Afghan restaurants, even if they could be a little more helpfully spaced out.

On the walk back to the car park we went past Kobeeda Palace. The lights were on, you could see through the windows and the place was buzzing and packed. Rather unworthily, my instinctive reaction was to smile. That’s right, you show them, I thought to myself.