N.B. Art Of Siam closed in December 2015. I’ve left the review up for posterity.

I love eating out, really I do, but sometimes even I get a little jaded. The constant search for new places occasionally takes its toll, and from time to time Reading can feel like Indian after Italian after chain after chain. So for this week’s review I looked at the lovingly prepared, generously suggested list of dining options and I’m sorry to say that I really struggled to pick. The rain was bucketing down on and off and the thought of toddling over to Caversham or venturing out into the Berkshire countryside just didn’t appeal. What to do?

So I chose Art of Siam probably for all the wrong reasons; because it was conveniently central and because I couldn’t remember the last time I’d paid it a visit. I did make myself a promise this time, though: no starter platter, no pad Thai, no dishes that I’ve reviewed before in other places. I’m not always the most imaginative diner in a Thai restaurant, something even I know. This time, I told myself, it’s all going to be different. Besides, I imagine that any Thai restaurant worth its fish sauce will be able to rustle up a those dishes with the chef’s hands Thai’d (I know, I’m sorry) so it probably isn’t the best way to judge the kitchen.

On entering the almost empty restaurant on a rainy mid-week night I had conflicting feelings of comfort and trepidation. The dining room is the same as I remember from my first visit what must be ten years ago – beautiful wood panelling lining the walls, a scattering of Buddhas and a gorgeous wooden lattice covering the ceiling. Even the shuttered windows looking down on King’s Walk are attractive. Only a few things – like the rickety rattan chairs, several of them taped or repaired – make the room look a little tired. Apart from that, the effect is like stepping into a movie set; at once splendid and a tiny bit contrived. The tables are all set with branded Art of Siam plates (and wineglasses), elaborately folded cloth napkins and forks and spoons. It really is a gorgeous place to eat dinner – marred only if you get one of the seats overlooking the somewhat municipal corridor leading to the kitchen.

Service was quick, enthusiastic and a little, well, amateurish. In my quest to order something different for once I wanted plenty of advice only to find that the waitress didn’t really know her way around the menu. When I asked what was in some of the dishes, to help me choose, she suggested that one chicken dish contained onions and peppers, whereas another contained peppers and onions. Further questioning gave the impression that all the dishes were pretty much the same, in levels of vagueness if nothing else. When pressed she confessed that she had been working there for less than a week and so went off to ask the kitchen more about the dishes but even then, the answers didn’t make anything clearer.

Later on, what purported to be our mains turned up – except they bore no relation to what we had actually ordered. We looked at them slightly baffled for a minute or so and the waitress then swooped and carried them off to another table (which was especially galling as they looked delicious). The whole experience was friendly and pleasant but utterly chaotic, which left me thinking that the whole meal was going to be something of a lottery.

My sinking feeling didn’t last long, anyway, because – probably through luck more than judgment – the starters were very good indeed. The more conventional of them, toong tong, were essentially big fat wontons filled with minced chicken and prawn. So far, so conventional, but the filling was absolutely top notch. None of that disturbingly bouncy, gelatinous pinkness I’ve had at many other restaurants – instead, the filling was beautiful, dense and firm. The plum sauce they came with felt like an anonymous sweet dipping sauce, but it still added something to the dish (I was expecting plum sauce as you’d get in Chinese restaurants, probably wrongly, so was a tad disappointed). No starter in a Thai restaurant would be complete without a bit of vegetable sculpture so of course this was also accompanied with a flower made out of carrot. (I’ve never been hungry enough to eat one of these. Not yet, anyway.) 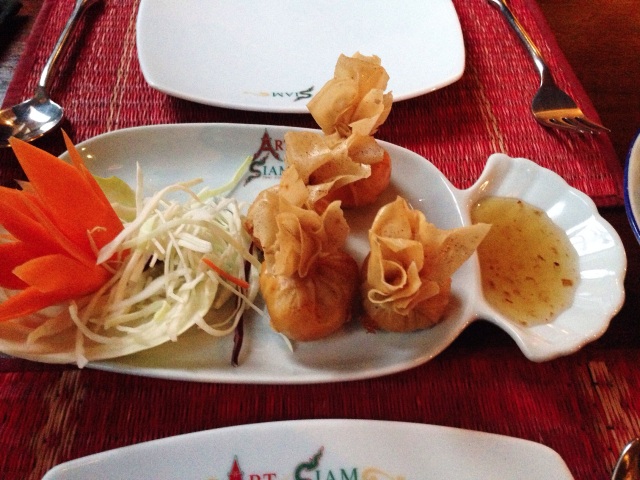 The standout dish though – not just among the starters but in the whole meal – was yum gai yang, or chicken salad. I’ve never had Thai salad before because, well, it’s salad, but this was in a different league. It was salad in the sense that it wasn’t served with a thick hot sauce, not in the sense of lettuce and tomato and celery. Instead I got slices of warm, freshly grilled chicken dressed with lemongrass, galangal, chilli and lime juice. The bits and bobs of vegetables it came with were merely for texture because it was all about the amazing dressing which was the perfect balance of hot and sour – just the right side of bearable heat and just the right side of enjoyable sharpness.

Maybe it’s just my lack of imagination in Thai restaurants, in fact I’m sure it is, but I’ve not had anything like this before. It was absolutely stunning – a dish I keep thinking about, remembering and wanting to have again, even though it made my lips ever so slightly numb, made my tongue blaze and made me order a cooling glass of milk. It was a funfair ride of a dish – I was shaken at the end but a little bit of me, in the back of my mind, was shouting “Again! Again!”

Mains could never live up to that, but to their credit they weren’t far off. Pla chu chi, lightly battered white fish in a red curry sauce, was one of the biggest dishes I’ve been served in a long time. The sauce was a good one, although a little less generous than I’d have liked – especially after such a fiery starter – so not much to tip onto the rice (I’ve long thought the best bit of most Thai meals is that mixture of sauce and rice you end up with towards the end of the meal). In amongst the fish were slices of chilli big enough to kill a small child plus a dollop of coconut milk on top – just in case you hadn’t realised this was a rich and unhealthy dish.

Gai phad bai kraprao, despite the long name, was probably the simplest dish I had: chicken stir fried with fresh chilli and Thai basil (and onions and peppers, not that that marked it out from the other chicken dishes on the menu by the sounds of it). Even so it was lovely with everything done just right: thin, tender slivers of chicken, soft sweet onions and a sauce which was more interesting than I was expecting, savoury and salty with a note almost of something like aniseed. Again, it was light on the sauce – I admire them for not drowning their main courses with gloopy sauce but it did leave me feeling my coconut rice (pleasant but unremarkable) was a tad underdressed.

The only real misfire was the other side dish; fried noodles turned out to be wide, flat, almost completely undressed, clumpy noodles which transformed into rubber bands within minutes of being brought to the table. I’m still not convinced that they really were fried, because they felt more like they’d been steamed into a state of abject surrender, but the waitress assured me they were. I pretty much left them, although I had quite enough food so it wasn’t a tragedy (the waitress offered to take them back to the kitchen and get them to re-fry them so I could take them home, which is very sweet but does rather miss the point).

The wine served here is allegedly exactly the same as in Thai Corner which makes me wonder if Monsoon Valley has managed to secure the only shipping containers that make it safely across to the UK. I say allegedly as it wasn’t the smooth easy drinking red I am used to from Monsoon Valley but after a couple of chilli-soaked slices of chicken it hardly mattered. It was just enough to take the edge off without getting silly on a school night. The total bill for two starters, two mains, two side dishes, two glasses of wine (and one absolutely indispensable glass of milk) was forty-three pounds excluding service – a steal for the quality of food and the boundless flavours on offer.

If I didn’t review restaurants, and I’d been going out that rainy midweek night, I’d have gone somewhere tried and tested. I’d have had something I often order and I’m sure I’d have liked it well enough. And some nights that’s what you want, something comfortable and reliable. But I’m glad I didn’t. I’m glad that – for all its Italians and Indians and chains – Reading’s restaurants still have the capacity to surprise and that by going somewhere you’d taken for granted and forgotten all about, by taking a chance on something you wouldn’t normally order in a million years, you can still be ambushed by a wonderful meal. I hope you try it some time, if not in Art Of Siam then somewhere else. Either way, make the most of this because heaven knows, you won’t find me recommending the salad very often.