N.B. Kyklos closed in January 2014. I’ve left the review up for posterity.

One thing I’ve learned so far in my – admittedly limited – experience of reviewing restaurants is that some reviews are easier to write than others. Let’s say, for example, that I have a good meal in a good restaurant (or a restaurant that I think is good, anyway). To some extent that review writes itself, and my main worry is doing it justice so that you’ll think it sounds good and hopefully want to eat there yourself. Going to a bad restaurant and having a bad meal also makes for an easy review – less fun to eat, but more fun to write and often more enjoyable to read. But the tricky one is when you go to a restaurant that, in so many ways, is “good” – the room, the service, the little touches – but the food just isn’t up to scratch. But hold on – isn’t a good restaurant a place that serves you good food and a bad restaurant one that serves you bad food? Is it possible to have a bad meal in a good restaurant?

All very Carrie Bradshaw I know, and perhaps I’m showing my cards too soon, but I’ve been thinking about this a lot this week because of my visit to Kyklos. So many things about it work, it should be a good restaurant on paper, but the food doesn’t quite live up to expectations.

I’ve been to Kyklos a few times since it opened. It’s in that spot that’s a bit of an elephant’s graveyard for restaurants, above Burger King in King’s Walk, having at various times been Topo Gigio, Mari E Monti and the Himalayan Momo House. They’ve done a nice job on refurbishing it; it used to be quite a sterile, unappealing space but looks much better now with smart white walls and very fetching white shutters overlooking the Walk itself. The long, thin room has been broken up (with some lit glass partitions with an olive motif which are, I’ve discovered, surprisingly hard to describe) so it doesn’t have the chilly air that its predecessors had, and the bar area at the front has some welcoming seating for those waiting for a table.

The greeting at the entrance is incredibly warm – I’ve only been a couple of times, and not for a while, but I was welcomed by the waitress as if I was a friend rather than a customer. This was definitely the shape of things to come, too; Kyklos does service very well.

Sitting down we were given three menus; food with a wine list on the back, a set meze menu and a short Greek wine list – three whites, three reds, nothing over twenty-five pounds. This was a bit of a disappointment in itself, actually; Greek wine can be very good and is much underrated, and I was hoping central Reading’s only Greek restaurant might do more to show that off. On a recommendation from the waiter we ordered a bottle of Greek white, a Malagouzia which I’d never heard of, let alone tried. We couldn’t decide who should taste it so the waiter poured a little for each of us, which was a nice gesture. Their range of Greek wines may be a bit narrow, but this was gorgeous – fresh, light, floral, not too dry (very dry whites have never really done it for me) and good value at £23.

Our starters, a selection of meze, were the first indication that we might be about to have a middling meal in a good restaurant. Houmous was very tasty – often they have a strong smoky taste or are pungent with garlic, but this one was rich with tahini and somehow tasted lighter and cleaner. The pitta, though, was stingy – one warmed pitta slices into triangles, drizzled with oil and sprinkled with herbs. Loading all that houmous onto a single pitta was a challenge, although of course we managed it – heaven forbid that anything went to waste.

Salted cod in beer batter with skordalia was equally frustrating and inconsistent. The batter on the three fingers of fish was light and perfectly done, but the flesh underneath was uncomfortably chewy. The skordalia was plain disappointing; it’s meant to be the kind of garlic mashed potato that can make enemies on public transport the following morning, but this was a lumpy school dinner effort and finding garlic in it was completely beyond me.

The best of the bunch was the soutzoukakia – beef and lamb meatballs with aromatic mash and cinnamon oil. These were lovely – coarse without being bouncy, three generous meatballs in rich tomato sauce on a bed of gorgeous, smooth mash. I couldn’t quite believe that the same kitchen could dish up two such different examples of mashed potato, but the one that came with the meatballs was far superior, if a little runny (dishing up was fun, put it that way). The flavours, though, were great – and the hint of cinnamon in a savoury dish, so often a feature of Greek food, worked beautifully. 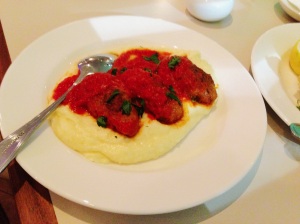 The mains were further evidence of an inconsistent kitchen that was either terrified of, or had run out of, garlic. We went for the chargrilled whole sea bass with French fries and aioli, mainly because I’d had plenty of grilled fish on holiday in Greece at the start of the year, and wanted to relive happy memories from what felt like a lifetime ago. It arrived whole – which was my choice, although I did have the option for the kitchen to fillet it – and was underwhelming. Grilled fish on holiday is a wonderful thing partly because of the crispy skin; almost burnt but not quite, beautifully salty, dressed with lemon and oil. This however didn’t look like it had gone anywhere near a grill – it looked baked at best, and the skin was soft and slippery. Once I’d filleted it there wasn’t much left – and I’m no slouch at filleting, even if I do say so myself. The starters at Kyklos are quite big so this wasn’t the tragedy it could have been, but the fact remained that this dish cost sixteen pounds and felt like very little fish for the money.

The French fries were also false advertising, being nothing of the kind – they were very respectable chunky chips, the right blend of crunchy and fluffy – but they weren’t what I was expecting. I was hoping to have a sheaf of skinny crispy fries to dip in my rich aioli, and I didn’t get that. And, as you can probably guess by now, I didn’t get aioli either. It didn’t taste remotely of garlic – if anything, what I got was tarragon which wouldn’t have gone with the fish at all. 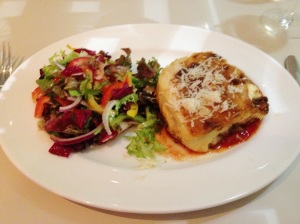 Between us we only had room for one dessert. I asked the waitress to help me pick between the panna cotta with rose water (which I thought might be quite light) and the walnut cake (which I thought would be quite Greek). She instead recommended the vanilla custard in filo pastry with cinnamon and mango ice cream as it’s home made in the restaurant. What this means for the other desserts, I don’t know but I’m easily led so I accepted her suggestion. This was a good plan, as it turned out. The dessert is known as galaktoboureko in Greece, though I’ve never found it outside of Crete, and it’s delicious; layers of filo pastry filled with smooth semolina custard with a light syrup poured over the top (similar to how baklava is served), all warm and inviting. The curl of ice cream on the side, on the other hand, was completely superfluous and didn’t taste of cinnamon at all, just mango.

I think, on reflection, that the dessert I had is representative of Kyklos as a whole. The core elements are really good: an attractive room, excellent, friendly service, some delicious ingredients and some authentic Greek flavours. But some things miss the mark completely: the flaccid fish, the lumpy mash, the lack of garlic in the skordalia or seemingly anywhere else, the pointless ice cream. I kept thinking if only: if only I’d ordered different dishes, the kleftiko perhaps, or the octopus stew with chick peas. But if it’s a good restaurant, it shouldn’t be possible to order badly – right?

So all in all, I’ve found this a difficult review to write. I want Kyklos to do well; a good Greek restaurant in the middle of town would be a wonderful thing. I really wanted to love it and to score it highly, but on the night I went there were too many let-downs and too many mistakes. You might have a different experience, and I wouldn’t entirely want to discourage you from finding out, but I do want to warn you. I suppose the last thing to add is that Kyklos is not a cheap place: our total bill was £75 for three starters, two mains, one bottle of wine and one dessert. I know I could go to Kyrenia in Caversham for the same money and have a considerably better meal. But then that’s a different review.