I’d always told myself that I wouldn’t review curry houses, for lots of reasons. Reading has a lot of them, all over the place, for one. For another thing, the local papers cover them extensively and frequently. I’m not sure how they do it, after all it must be difficult to review an Indian restaurant every month. I mean, it’s all just different meats in different orange sauces most of the time, isn’t it? And who really cares which place does the best korma/bhuna/biryani anyway, especially when people tend to have a curry house that they go to out of habit and comfort.

So why is this week’s review of House Of Flavours? Well, people kept recommending it. It got mentioned on Twitter a lot. A few people asked me to go review it, and more than one said “you really should go”. So the contrarian in me thought “why not?” and that same contrarian quite liked the idea of going in December, when most people’s thoughts are turning to slightly more traditional warming food.

House Of Flavours is a little bit out of the centre, not far from the library, in a spot that has seen mixed fortunes over the years. It used to be Ha! Ha! (which I still miss, believe it or not), and then it was some tapas restaurant whose name escapes me, then an ill-fated pub that closed on Sunday afternoons, and then Mangal, the Turkish place which has gone up in the world and relocated to St Mary’s Butts.

Despite that, when I visited on a Saturday lunchtime (the December diary being what it is) I was impressed to see that the front room of this admittedly sizeable restaurant was pretty much full, almost exclusively with Indian families. I nearly left again when I thought this might be due to the all you can eat buffet they were offering (and nobody needs a review of one of those, in my opinion), but to my relief they were also offering their full menu so the very polished waiters talked me into staying. I’m glad they did.

The House Of Flavours’ menu is an intimidating tome. If you look at it on their website you get some idea of this; twenty-four pages long, and you don’t get to the a la carte menu until page fourteen. Before that it’s all drinks – a lot of drinks – and the set menus (at the moment a “Christmas menu”, though god knows how different that is to their usual set menu – I didn’t see any stuffing bhajis or turkey jalfrezi, thank goodness). The set menu featured a lot of the familiar dishes you could get anywhere else, but wading through to the a la carte things started to get a lot more interesting – a wide range of regional specialities, very well described, along with a range of vegetarian dishes so impressive I even considered ordering some of them.

We got the clichéd poppadoms while waiting for our starters and even these made me begin to feel like I was in a restaurant that happened to serve Indian food rather than an Indian restaurant. Two of the poppadoms were plain and delicate but the third was studded with nigella seeds and the taste and texture were something else. The raita was thick and fresh, not the insipid liquid you usually get. The mango chutney was also speckled with cumin and nigella, probably the best I can remember eating, and the onions (offered instead of the usual lime pickle) were finely diced and spiced, as tasty as they were antisocial. So often this is just a way to eat something, anything, while you’re waiting for your starters to arrive but these felt like they had a purpose all their own. It was a promising beginning.

The starters, by and large, lived up to that. The lahsooni chicken tikka was just gorgeous – three sensibly sized pieces of chicken, marinated in yoghurt and spices and cooked beautifully. Everything about the flavour and texture of these worked perfectly – the spicing came through with the right intensity at the right speed and the meat was so tender. I was simultaneously sorry they were over so quickly and delighted that they were perfect – always the way with a truly great starter.

The other starter was maave ki seekh, which is described on the menu as “root vegetables and cottage cheese flavoured with ginger and cooked in a clay oven”, and it was delicious if not entirely what I was expecting. The texture was rather like partially cooked gingerbread, cooked on a skewer; the outside was slightly firm and the inside was a delicious warming paste. If it had any vegetables in it I couldn’t truly tell but it was still very tasty, especially with a squirt of lemon juice and a few sprigs of – properly dressed – salad on the side. I keep thinking about what I can compare it to and falling short. Was it like falafel? Not really. Like a bhaji? No, that’s not right either. Maybe this is another reason why I shy away from reviewing Indian restaurants, because I don’t have the vocabulary to do them justice.

By this stage I thought I was probably onto a winner, although I’ve been disappointed at that stage many times (how many restaurants have you been to where you’ve thought I wish I’d stopped at the starters? For me it’s hundreds). But the mains didn’t let the standard drop. Shahi chicken tak-a-tak (named, according to the very informative menu, after the noise it makes popping away on the skillet) is one of those sizzling griddled dishes you always get jealous of when someone else at your table orders it. This one was no exception: so much more than just a pile of meat and onions, it came with a rich hot sauce with plenty of tomato. How hot? Well, I didn’t lose all feeling in my mouth but tissues had to come out at the table – I hope that’s not too much information, but until someone comes up with a Richter Scale of food heat it’s the best I can do. I loved it. 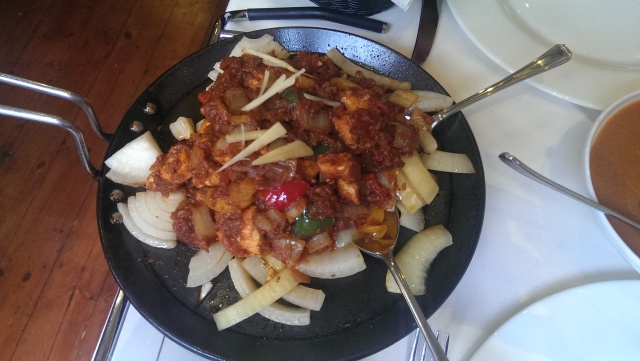 Again the heat was really clever; it built up slowly, in layers, rather than pulverising you from the start. I’m not going to say “oh, it was genuine Indian food” because I’m not Indian and I wouldn’t know, but I’ve been to India once and it reminded me of the food I had when I went – that intelligent, calculated use of spice. Again, the chicken was soft and tender, not firm and unyielding, although after the starters I wouldn’t have expected anything less.

Having said all of that, the other dish was indeed chunks of meat in an orange sauce. Well, almost anyway – the mahi dum anari was sizeable chunks of fish, soft to the point of falling apart, in a silky sauce. This sauce was much more delicate, almost sweet but again the spice worked brilliantly. I wish I could do it justice by describing it better, but I might try and improve my skills in this area by going back to House Of Flavours. The other delight in this dish was the pomegranate on top – I was sceptical about this but its sweet pop under the teeth went superbly with the dish. According to the menu, this dish was served to Barack Obama on his last state visit to India; I wasn’t moved to take a selfie, but I did take a picture of the dish (it doesn’t do it justice any better than this paragraph does). 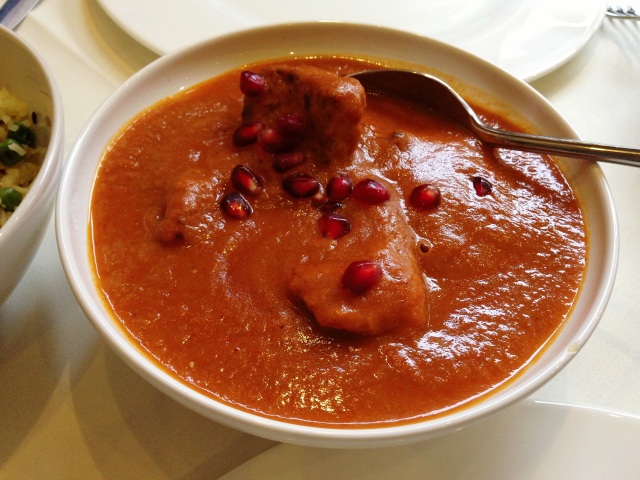 Normally in a curry house this would be accompanied with some pilau rice and a big fluffy naan but again, I was moved to try different things. The mutter pulao was rice rich with peas and with just the right amount of cumin, another revelation in a meal packed with revelations. The paratha was even better, buttery, chewy and soft at the same time and layered in a way which somehow reminded me – I don’t know why – of the pastry on the bottom of a tarte tatin. 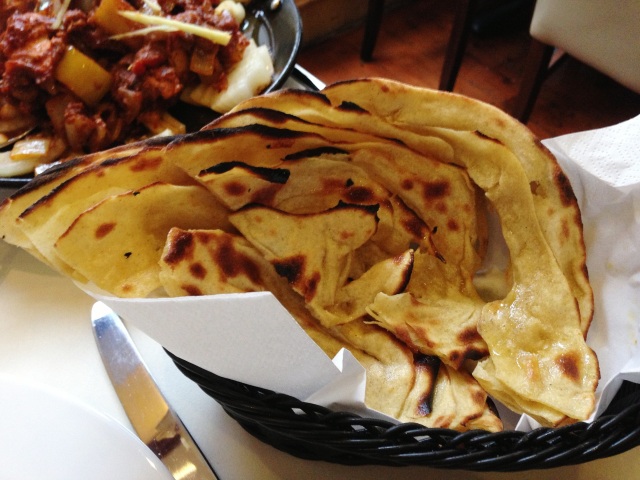 Nobody goes to an Indian restaurant for the drink, but I feel I should mention it because the wine list has three Indian wines on it. I tried two: the sauvignon blanc was decent if slightly thin on flavour but the cabernet sauvignon was spot on – properly hearty and feisty enough to stand up to the spices in my meal (I might have had a bottle, but it was all Kingfisher on the opposite side of the table to me, which is fair enough I guess). They also have two pretty creditable dessert wines – a Sauternes and a Californian red muscat – at very reasonable prices, albeit not for a full glass.

The reason I know about the dessert wines is that I couldn’t stay away from the desserts. I have a real penchant for gulab jamun so I was thrilled to see them on the menu. If you have a sweet tooth and you’ve never tried them, you’re missing out; they’re doughy balls – made from curdled milk, but don’t let that put you off – deep fried and then served soaked in a sugar syrup tinged with cardamom and rose water. The portion here is only small (two balls – no jokes, please) but that turned out to be plenty, especially if you don’t share them with anyone, as I didn’t.

The total bill for two people, for three-ish courses with a couple of drinks each came to £65. You could eat more cheaply than that if you stuck to one of their set menus but even so I felt this was very good value. I mentioned the service in passing at the beginning of the review but it is worth another mention too – very polished, very smooth and only there when you needed it. The whole experience felt very different to most Indian restaurants I’ve visited in Reading.

How to sum this place up? Well, how about doing it like this: I remember when I first found out that this place was opening, and I remember walking past the sign and reading the name. House Of Flavours? I thought. That’s a ridiculous name. It’s just going to be an Indian restaurant, and Reading needs another one of those like it needs another Italian. Now I’ve been, I know how wrong I was; it’s the perfect name for the restaurant and it sums up exactly what they offer – more than anything, the flavours are what I remember. I can’t think of many higher compliments for a restaurant than this, but even before I’d left I was already planning my return. Thinking about what flavours I’d like to sample next.

10 thoughts on “House Of Flavours”