I changed my mind about whether to review Bel And The Dragon several times. Initially I was all for going, and then I looked at the website: the menu looked suspiciously similar to the one I’d ordered from the last time I went there, well over a year ago. And that, in fact, was almost identical to the menu when the local paper reviewed it nearly two years ago. Bel’s website boasted a passion for seasonal, local, sustainable food – but the evidence suggested otherwise, so I decided not to bother. But then I was told that I might be being a bit harsh, and that the menu had changed only recently, so I decided to give them a chance.

There’s no attractive way to approach Bel And The Dragon, especially on foot. You can go down the canal next to some rather forbidding-looking blocks of flats, or down Kenavon Drive, past the questionable delights of the Toys R Us. Even the address, Gas Works Road, sounds grim. It’s a pity, because the building itself is handsome (I’m not sure what it used to be: Bel’s own website says it’s an ex biscuit factory which I don’t think is correct) and the inside is gorgeous too, with lots of banquettes and booths round the edges of a big bright high-ceilinged room.

Looking at the menu induced déjà vu because, as feared, the majority of it had indeed remained unchanged for two years, the mention of English asparagus the only concession to seasonality. The drinks we had while making up our mind did nothing to calm the sinking feeling. The “Bloody Caesar” – a Bloody Mary variant featuring clamato juice, lime, horseradish and sherry – was all citrus and no tomato, thinner, sharper and more joyless than Gillian McKeith. The house wine was even odder – the menu claims that they bring a magnum over, you drink as much as you want and are charged by the 125ml. In reality, what happened is that they brought 125ml and charged me, at the end, for 175ml (by which point I was too exhausted even to complain).

Service at Bel is the triumph of quantity over quality. At times the dining room had over half a dozen aproned types wafting around but they spent most of their time talking to one another and trying their hardest to avoid interacting with diners. They seemed to be having a lovely time, but I did wish they’d been more interested in making sure that I was, too. One was either a trainee or on work experience because her sole job seemed to be to stand there deferring to someone else: at one point I made eye contact and smiled (because I wanted to see the wine list) and she smiled back and then went back to staring off into space, seemingly her main skill. Perhaps she just thought that I really enjoyed being ignored: I suppose it’s possible.

So, I’ve bitched about the menu, I’ve bitched about the service, time to bitch about the food, right? If only it were that simple: some of it wasn’t bad, which makes this review harder to write than I was expecting. A starter of scallops, cauliflower puree and sherry caramel, for instance, was very good: four nicely cooked scallops, a generous helping of sweet puree and little crispy miniature florets around the side (and a scattering of micro herbs, because chefs still think we give a toss about micro herbs: I have no idea why). To put this in perspective, it was twelve pounds – as much as some of the mains – so it should have been pretty good but even so it wasn’t disappointing. I was so geared up, by that stage, for disappointment that not being able to be disappointed was almost disappointing in itself. I’m not sure if that’s a win-win or lose-lose situation.

The burrata, on the other hand had been treated so badly that I fear the chef had never seen one before. It looked as if had been torn to pieces by an angry mob before being studded with slightly chewy thyme leaves and strewn on a plate with far too much beetroot. Sure, there were four types of beetroot and a few toasted pine nuts, but what should have been the centrepiece of the dish really wasn’t. Where I expect a burrata to be a soft, yielding pouch of rich, creamy delight this was a tough, abused poor relation. I don’t know what had been done to it prior to it reaching my plate but it had grown a thick skin to make up for it.

Of the mains, roast suckling pig was a delight and easily the best dish of the visit. A healthy (or rather, unhealthy) portion of pork, cooked just the right side of dryness, came on a board with a little jug of rich, savoury gravy and some spiced apple chutney which added a bit of sweetness and moisture. The crackling – light, salty and sinful – was how I imagine Quavers would taste in heaven. But, inevitably, there were still disappointments. Bel’s menu says that they are very proud of their duck fat and thyme roasted potatoes, but on this evidence I can’t see why; there was no evidence of thyme and none of the gorgeous, rough, crispy exterior you get from a potato well-roasted in duck fat.

The side dish, ostensibly “cauliflower, smashed garlic and pecorino” was cauliflower cheese. No more, no less. If they’d used pecorino, and I’m not convinced, it was a waste of pecorino. The garlic just didn’t turn up at all (maybe because it was smashed). At eighteen pounds – with an extra three for the cauliflower cheese – it wasn’t quite good enough to justify the price: eating the dish felt a bit like watching the meter running in a taxi heading somewhere you don’t even particularly want to go.

The haddock, chorizo and white bean stew looked appealing when it came and the flavours didn’t disappoint but, after digging around for a moment, I realised that there was an absence of beans. I couldn’t find any. None. I asked one of the flotilla of waitresses about this and she said that perhaps they had been pureed into the sauce but she would check with the kitchen. Then she returned with another explanation… apparently the stew is cooked in a large pot and the beans all sink to the bottom so, on this occasion, when they served it up it just turned out that none made it into my bowl! Not one solitary bean. (No, I didn’t believe it either.) To make up for this the kitchen dished me up a generous side portion of beans, which just happened to be exactly as many as you would find in a tin. These seemed to be in a different sauce to the stew but I didn’t want to ask any more questions and was just grateful they turned up at all.

The stew itself was very pleasant with some decent sized pieces of haddock, quite a few diced bits of chorizo (though this was on the rubbery side, which suggested it was either poor quality or hadn’t been cooked for long enough) and an awful lot of celery. The advertised “smoked tomatoes” were instead three unsmoked cherry tomatoes which had been grilled for just long enough for their skins to split. Overall it was a decent dish, once the beans were in, but I wouldn’t say more than that. 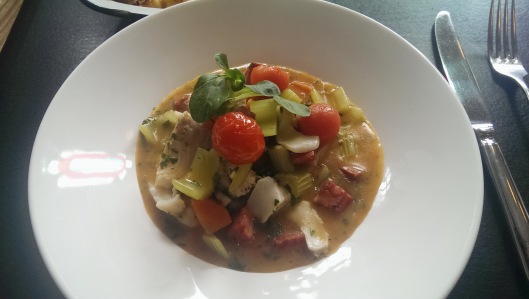 Pricing at Bel is all over the place. The starters are an expensive bunch – most around the eight or nine pound mark – and the mains vary widely from the reasonable (my stew was twelve pounds, as is the fish pie) to the punitive (the idea that two people would really fork out sixty-six pounds to share a rib of beef on the bone is either hopeless optimism or exploitation, not sure which). But the desserts are all a consistent six pounds. The Valrhona chocolate mousse with honeycomb and popping candy was indifferent stuff. I got a lot of sweetness and no cocoa, which meant this either wasn’t Valrhona or was Valrhona hopelessly maltreated. The honeycomb just added to the relentless sugariness, as did the popping candy, and the three meagre raspberries didn’t have enough sharpness to put up a fight against it.

Eton mess was exactly as you would expect an Eton mess to be – a big dollop of strawberries (in April: so much for seasonal there, too), smashed meringue and cream. The only thing slightly elevating this above the sum of its parts were the tiny pieces of fresh mint that had been mixed in. The gigantic knickerbocker glory glass it came in took my opinion back down a notch, mind – I’d have preferred something more elegant and (I can’t quite believe I am saying this) smaller. Wanting a smaller dessert: hardly glowing praise, is it?

Three courses for two, with a Bloody Mary, a missold glass of house rosé and two glasses of red wine which aren’t interesting enough to merit any mention other than this, came to ninety-eight pounds. This includes an optional ten per cent service charge of the kind which is actually close to compulsory, as you’d have to make a scene and ask them to take it off (I was tempted to, but by the end they had worn me down to the extent where I just wanted to go: it turns out that indifference is contagious).

The best way of summing this up is that if you went to Bel you wouldn’t have a bad meal but you wouldn’t have a great meal either. I didn’t eat anything actively bad, and nothing made my heart sing. But – and this might be the clincher – you’re unlikely to have a cheap meal. I’m afraid, despite some tasty dishes, I still don’t see what Bel’s USP is, or why anybody would choose it for dinner. It’s not seasonal, it’s not particularly imaginative, it’s not good value and the inconvenient location and indifferent service wipe out any of the advantages of that lovely room. Perhaps I’ll go again when they overhaul their menu, in which case they should pencil me in for some time in 2018.

8 thoughts on “Bel And The Dragon”