The Abbot Cook closed in April 2018 and is reopening later in the month as a new pub called the Hope & Bear. I’ve kept this review up for posterity and will review the Hope & Bear in due course.

The Abbot Cook is another of those pubs that falls into my “lovely old boozer” category. Since the end of its days as a tired student pub it’s been stripped back and refreshed to capture that shabby chic look that so many places have these days. At the Abbot Cook, though, it really works with the parquet wooden floors, fireplaces and sash windows. On a midweek night it’s busy enough to be buzzy but the music is still muted enough that you can have a conversation without yelling (yes, I know I sound old: I’m okay with that). The long bar offers plenty of decent draught beers plus just enough wines by the glass to make the choice a challenge. So the stage is set for a good performance. Right?

The first act didn’t come off too well. We picked a couple of conventional-sounding starters and shared because we couldn’t decide. The “roast chicken Caesar salad with croutons, anchovies and house Caesar dressing” was decent enough, if small, but crucially the anchovies were missing. I know a lot of people don’t love an anchovy but I think they’re an essential part of a Caesar salad, that salty tang that balances out the creamy dressing and makes ordering a salad worthwhile rather than just worthy. The rest of it was going through the motions, really, a handful of croutons, some decent roast chicken (cold, sadly, but you can’t have everything) and generous amounts of parmesan. But, in truth, all I really noticed was the anchovies that weren’t there. 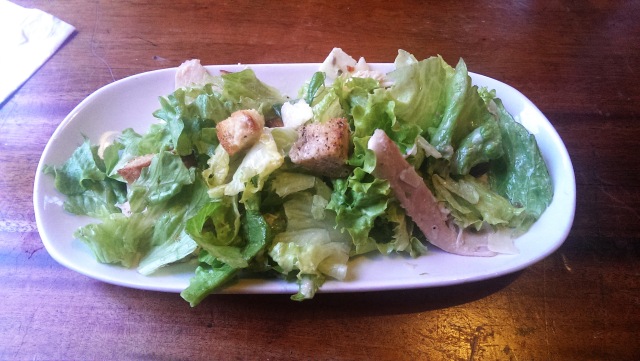 The salt and pepper squid with lime mayonnaise also disappointed. It was hard to tell if the squid was fresh because it had been cooked to the point of brittle crunchiness. The lime in the mayonnaise was presumably in the same place as the anchovies, and the mayonnaise itself was suspiciously white and thin and tasted of not much. The little pile of pub salad on the end of the plate wasn’t dressed and seemed a little sad, as if it were just trying to make the plate look fuller. I’m not sure that this was any better than the sad excuse for calamari that was served up by the ill-fated Lobster Room; at least that was identifiably squid.

We picked mains from the specials board just because they sounded a bit more exciting than the meals on their normal menu (which is the usual array: lots of different kinds of burgers, fish and chips, fishcakes).

The “pan fried Atlantic cod supreme with bacon, spinach and puy lentils” was a good example of how to ruin a lovely piece of fish. The cod itself was fantastic – cooked just right and falling into big, thick flakes (I would have liked a crispier skin, but it was a minor detail). The rest of the dish let it down terribly: there was bacon, but not the small crispy smoky pieces which would have worked well. Instead, you got huge undercooked floppy slabs of the stuff. There were lentils and spinach, yes, but what the specials board neglected to say was that there was cream – a lot of cream. Not a cream sauce, just cream. A lake of unseasoned cream, in fact: my mouth felt coated with the stuff for hours afterwards. 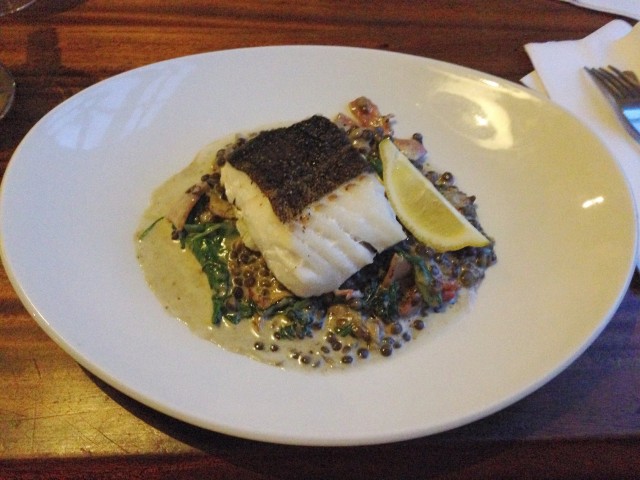 The “chicken breast and Cornish brie in bacon, baby potatoes and red wine mustard sauce” was at least evidence that someone in the kitchen could cook. The stuffed chicken breast had a layer of sun dried tomatoes tucked into the brie through the middle and the bacon, this time, was cooked just right so that there were no rubbery strings. The potatoes had been pan-fried so that some of them were a little browned then a layer of steamed kale added before the whole lot was doused in a rich, creamy wholegrain mustard sauce. I didn’t get much in the way of red wine in there but it would have been overwhelmed by the mustard anyway. This is the sort of dish I would never cook at home because of the overwhelming calorie count: as a pub dish it was enjoyable, even if I was facing potato-geddon by attempting to finish it (I didn’t, but it was a close call). 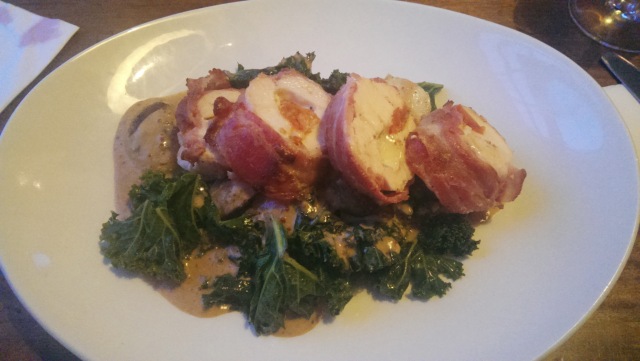 We took advantage of the wide range of drinks and tried lots of different things, reinforcing my view that the Abbot Cook was a much better pub than it was a restaurant. A pint of Blue Moon was spot on – subtle and refreshing with a suitably metrosexual slice of orange sticking out of the rim. The Sangiovese (is it me, or is this a wine that has fallen out of fashion? I haven’t noticed it on a menu for a while) was nice for starters but was bettered by the much cheaper South African Chenin Blanc I followed it up with; crisp and fresh but not too dry (I prefer my whites on the off-dry side, although I like to think I stop well short of Blue Nun).

I didn’t have high hopes for dessert after all that, so we hedged our bets and shared a salted caramel and chocolate tart. Again, the menu was being a bit economical with the truth: the base was crushed biscuit rather than pastry so I’d say it was a cheesecake rather than a tart. The caramel taste wasn’t particularly strong but the top was scattered with coarse salt crystals which worked really well with the dark chocolate ganache. The website for the Abbot Cook doesn’t say if the desserts are home-made or not. I’d love to be wrong, but I suspect it’s the latter and the plate is just dressed with that irritating zig zag of out-of-a-squeezy-bottle chocolate sauce to make it look otherwise. It’s a shame that one of the nicest things I had that evening probably had the least to do with the kitchen.

The service doesn’t quite compare to other restaurants because there is no table service. Staff at the bar were always really friendly and clearly happy to chat to customers, but service at the table was a bit more lackadaisical with the waiter, if you’d call him that, checking up on us quite late into each dish while calling us “guys” or, even worse, “friend”. I wonder if he thought he was in Hoxton or Brick Lane rather than Cemetery Junction: still, he was very smiley.

In all the bill came to sixty pounds for two starters, two mains, one dessert and four drinks; indifferent food representing indifferent value for money.

The Abbot Cook is another example of that sad genre I see an awful lot of: an attractive pub doing unremarkable food. It’s such a handsome place, in an area which is short of nice places to drink, but I struggle to think of it as a destination for food in its own right. I guess the food is good enough to eat there if pressed by a friend, but no more than that. It’s a real shame: the interior deserves better, and I remember when it first opened that it really seemed to have some culinary aspirations (although, in fairness, they are currently running monthly events matching food with beer which suggest a bit more ambition). These days the menu seems to be more about burgers and fried chicken which is aimed more at the student clientele of their previous incarnation. As one of the few pubs in Reading that has a decent garden (albeit on the sometimes very busy London Road) I know I’ll be back there for a summertime drink, but I’m no hurry to eat there again. Not until they sort their act out.

4 thoughts on “The Abbot Cook”