N.B. Cappuccina Café closed in June 2014. I’ve left the review up for posterity.

Cappuccina Café wins one accolade right from the off; I think it might have the ugliest view of any café or restaurant in Reading. From my seat, through the glass front window, I could make out “Sam 99p” on West Street, with its rather hyperbolic slogan Yes! Everything’s 99p or less (it’s hard to imagine anybody walking past and actually saying that). Still, Cappuccina Café isn’t unique in having a bad view. From Picnic you can see the tables outside Munchee’s which house some of Reading’s most glamorous smoking al fresco diners. From the terrace at London Street Brasserie I once made out somebody on the grassy bank opposite urinating against the bridge (stay classy, Reading). None the less, I wanted to make the visit because Cappuccina Café is a fusion of Vietnamese and Portuguese and you don’t see that every day – not in Reading, not anywhere.

First impressions were mixed. It’s a very long room with the counter at the front, the kitchen at the back and the two overstretched waiters constantly doing a long walk from one to the other and back again. Only one person was serving when I got there, and he didn’t seem to be able to make up his mind whether to take my order or attend to the large pile of dishes in plain view in the sink, a pile which made me a tad nervous about ordering anything at all. As it was, he ineffectually pottered around in the general vicinity of the sink before coming back to check what I wanted (I had half a mind to tell him to do the washing up first). Was their dishwasher broken?

It’s a pity because the interior is quite handsome – smartish tables and chairs, a nice banquette along both sides of the room and tasteful tiled walls. There were plenty of cakes visible up at the counter and all of them looked distinctly tempting. I went on a Sunday lunchtime and it was full of families, most of them Asian – presumably Vietnamese, though I couldn’t tell for sure – all tucking into bowls of what I imagine were pho. Normally I’d take this as a good sign, but after recent experiences I approached things with a note of caution. The whole place did have the air of a crèche about it with plenty of kids roaming around – which ironically means this may be the most family-friendly place I’ve reviewed so far.

The general chaos continued well after I placed my order. One of the dishes I picked was bánh mì, the famous Vietnamese baguette which has been so popular in London over the last few years. It looked to me like the staff got a baguette out of the oven behind the counter, part assembled it behind the counter (next to the sink) and then took it all the way to the back of the restaurant, past my table, to add the rest of the ingredients. As a study in time and motion it was weird to put it lightly. To make matters worse, despite being (you’d hope) the easier to prepare of the two things I’d ordered it arrived a good couple of minutes after the other dish. By this stage we’d gone well past chaotic and were cantering into haphazard with reckless abandon.

When the bánh mì arrived I had waited so long, with such mounting despair, that I was expecting it to be indifferent. It should have been, because up to that point everything else was. To my surprise and relief, it was anything but. The barbecued pork was moist but not fatty, crispy, warm and utterly delicious. The menu said it was marinated in honey, five spice and lemongrass and I got all of that but especially the lemongrass. The shredded carrot (which I think was pickled), the little strips of cucumber and the daikon added crunch and yet more freshness, although the coriander seemed to be missing in action – a shame, because it would have fitted in perfectly. It was the kind of dish where you have a big grin after the first mouthful which lasts until well after the last, the sort of food that makes you shake your head in slow joy. It made me realise how underwhelming most sandwiches in Reading are – miserable clammy things, heavy and cold and soggy with mayo. 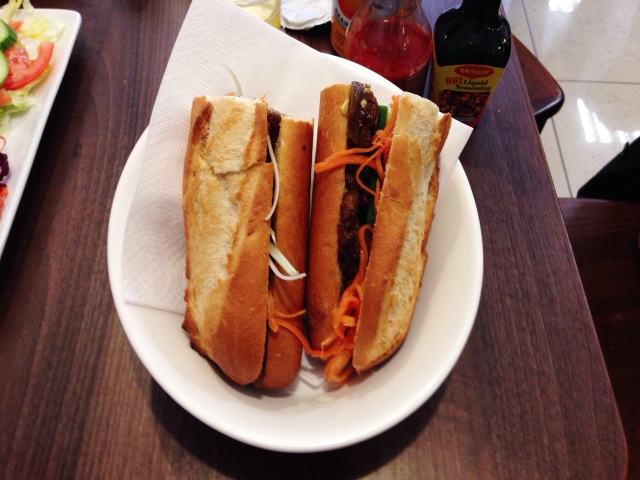 The grilled chicken with rice (com ga nuong) was so much more than the brief description would have you expect. The main attraction was a large leg of chicken which tasted like it, too, had been marinated in spices (including Chinese five spice and lemongrass) with a delicious crispy skin. For the size of the chicken leg there wasn’t a great deal of meat but what was there was moist and tasty, if a bit hard to get off the bone. On the side was a neat hillock of plain rice topped with a little pile of fried onions and a heap of pickled red cabbage and carrot which was just lovely with a forkful of chicken. The only out of place thing on the plate was the afterthought of salad, so forlorn and unloved that it just shouldn’t have been there. 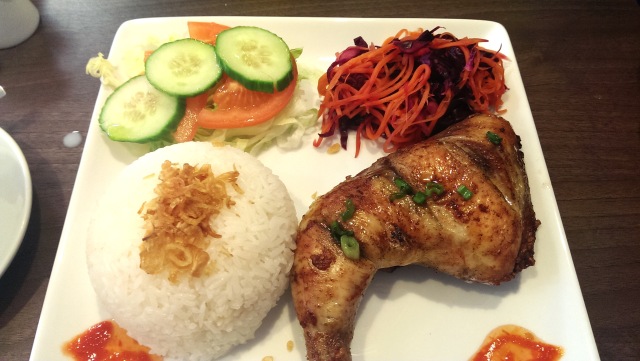 I felt it would be wrong to leave without also sampling the Portuguese section of the menu, so I went up and ordered a couple of pasteis de nata for dessert. These came warmed – again, in an oven rather than a microwave – ready to be dusted with cinnamon and wolfed down. For me, a Portuguese egg custard tart is one of the seven culinary wonders of the world, ideally fresh out of the oven, dusted with icing sugar and cinnamon and dispatched in two, maybe three mouthfuls at most. The pastry is light and flaky, the top golden brown and not quite burnt and the filling ever so slightly wobbly and flecked with vanilla. These weren’t like that – too firm, not warmed through enough, no icing sugar – but they were still pretty good, and a darned sight closer than I ever hoped to get in Reading, in a little spot on West Street with a prime view of the 99p shop. Pleasingly they were also ninety-five pence each, which makes them far better value than anything you could pick up in “Sam’s”. 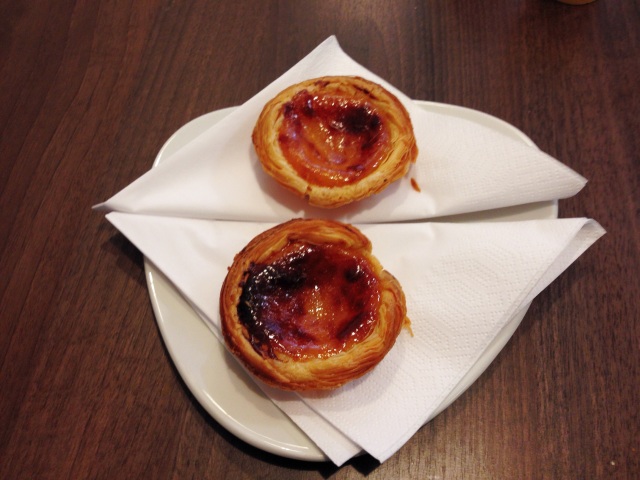 The whole thing – bánh mì, chicken with rice, two tarts, a cup of tea and a soft drink – came to fourteen pounds. A comparable lunch would have cost just as much in Pret, Costa or Nero and wouldn’t have been anywhere near as good. To me, Cappuccina Café is part of something interesting happening to Reading’s lunch scene. All over the place independent cafes are springing up – from Lincoln down the King’s Road (coffee and bagels) to Arepas Caffe at the other end of West Street (Venezuelan food and churros), to Shed in Merchant’s Place (toasties and “Saucy Friday”) – not to forget the granddaddy, Picnic (salad and cakes). There’s no excuse any more for the laziness of going to the usual players on Coffee Corner. So yes, the service is iffy, the layout is a nightmare and they really need to fix their dishwasher, but with all that said I’ll still be going back to Cappuccina, and sooner rather than later. They have three other types of bánh mì and I fancy trying them all, collecting the Vietnamese equivalent of stickers in a Panini album.