One of the drawbacks of this gig is taking the photographs, especially when I visit a restaurant and find myself sitting in a very empty room trying to take sneaky pictures without the staff noticing (this is more of a problem in some places than others: where the service is poor you could probably get on a table and belt out I Will Survive without anybody batting an eyelid). Empty Room Syndrome happens much more often if I’m dining at quiet times, so Quattro immediately had me feeling hopeful when I rocked up on a Monday night to a bustling dining room.

Why so packed, on a night when a fair few places don’t open at all? Well, Quattro is a popular place. At the time of writing it’s rated fourth on TripAdvisor among Reading restaurants, the highest rated place in Reading that isn’t a café. Customers rave about the food and the service, and many have posted multiple reviews. It’s celebrating its thirtieth birthday this year so I’m pretty sure that, along with Sweeney & Todd, it’s one of Reading’s oldest surviving restaurants. I’m never a big fan of the “so they must be doing something right” cliché, but it’s hard to argue with a restaurant full of customers on one of the deadest nights of the week.

Inside Quattro’s the layout is a little unusual; there are three funny little dining areas (one in each window either side of the entry hall and one in the back), each with room for fifteen or twenty covers, at little square tables a tiny bit elbow to elbow to make the most of the space. The tables are neatly laid out with proper cloth napkins and, even if my neighbours could hear every word I said, it was probably a fair price to price to pay for that buzzy experience. (It also meant I could hear the couple next to me: they weren’t having fun at all.)

So all that set my expectations high, but my first interaction with the waitress dampened them somewhat. I could make out a blackboard with specials, but I couldn’t read it so I asked the waitress what they were. Her reaction was an interesting one. She didn’t know them by heart. She didn’t say she’d forgotten her notes. She didn’t wander over, read them and come back or offer to ask a colleague to explain them. Instead, she took the road less travelled: she just scarpered. There might have been a little bit of traumatised mumbling involved, too. Shortly afterwards a waiter, a slightly older chap, came over and listed them for us, unsmilingly (after all that effort I felt like I should order one of them but they didn’t appeal so I didn’t. Sorry).

The menu was very much on the conventional side – antipasti, pasta, pizza and meat dishes – so conventional as to be barely worth explaining and with nothing on it I hadn’t seen elsewhere. That’s no crime, especially in a good, traditional, well-established restaurant but it does make for a pretty boring paragraph in the review, so apologies for that. The wine list was pretty traditional too, sticking to traditional Italian wines (chianti, pinot grigio, gavi, Barolo, all the greats), although I was pleased to see a decent selection of five half bottles. We had a half bottle of valpolicella for under a tenner and found it very easy to drink: fruity, juicy and not too heavy for a school night.

The starters were decent but unexciting. I liked the polpette rustiche: three beef meatballs with a decent dollop of tomato sauce. If there had been two, I would be packing this review full of all sorts of double entendres (it’s hard to resist as it is) but having three rather than two makes that tricky to put it lightly. They really were tasty – the massive balls (steady on) were coarse, well seasoned and avoided the twin horrors you often risk with a dish like this, of either being disturbingly smooth or chewily bouncy. The handful of salad on the side was, as so often, a not very decorative waste of time and really didn’t go. 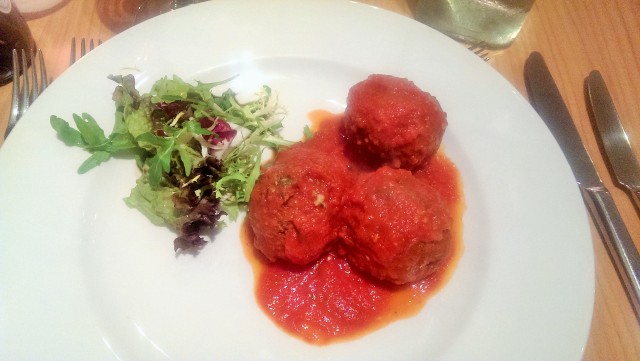 The fettuccine ai funghi was also competent but not exactly thrilling. Cream, garlic, pasta and mushrooms is a combination it’s hard not to like and so it was here, but it still felt like Italian food on autopilot. I was hoping for wild mushrooms (as you’d get at, for instance, Pepe Sale) but instead got little slices of what might have been button mushrooms. The pasta was very regular, which made me dubious about whether it was made on the premises. It wasn’t a huge portion – which, as a starter it shouldn’t be – but for eight pounds it felt distinctly unspecial. 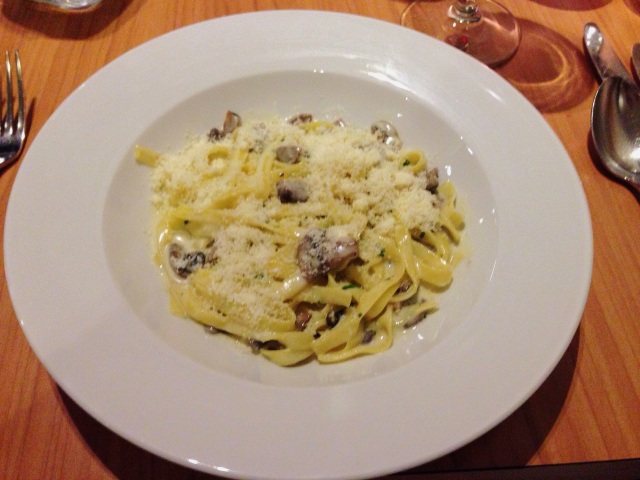 I had high hopes for the pizza, because one thing Reading lacks is a truly amazing pizzeria along the lines of London’s Franco Manca or Pizza Pilgrims. Having eaten the pizza Parma at Quattros, I can safely say that it’s still lacking one: the base was too thick and doughy, especially considering the menu describes it as “thin crust”. The tomato and mozzarella base was good but the parma ham was underwhelming. For a pizza like this, where the meat goes on after the pizza is cooked, I like the ham to be so thin that it’s delicate and translucent. This was on the bacon end of the meat thickness scale and was on the bright pink end of the ham colour spectrum (if there isn’t a ham colour spectrum I might just invent one. Or just start a band and call it that. I could release picture discs that looked like disappointing pizzas! But I digress) rather than the beautiful dark marbled hue of a truly great roll-it-up-and-eat-it-with-your-bare-hands prosciutto. When a pizza only has a few ingredients I want those ingredients to really sing, but these mumbled like the waitress. Oh, there was rocket too but the dish hasn’t yet been invented that can be redeemed by rocket alone. I managed about half before giving up. 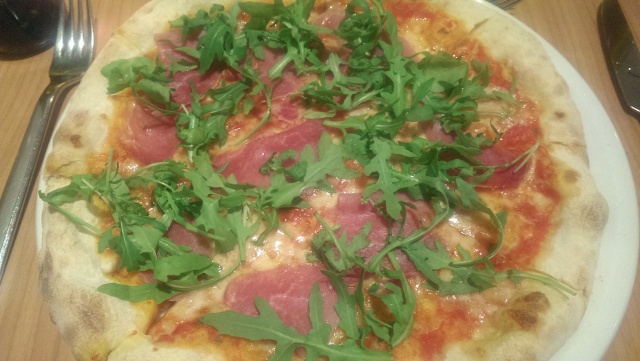 The other main was delizia di pollo – chicken supreme with asparagus and taleggio. This was better: the plate was no looker but the flavours made up for that. The big spears of asparagus were perfect, with just enough bite and the chicken was tasty and tender. I expected it to be stuffed with taleggio but instead the plate was covered in molten cheese: I’m not really sure how it got there but I wasn’t complaining. Good accompaniments, too: some properly sautéed potatoes, carrot, broccoli and some roasted peppers. All in all it felt – and looked – like something a friend might serve up at home, and I enjoyed it. Did I sixteen pounds ninety-five enjoy it? Hmm. 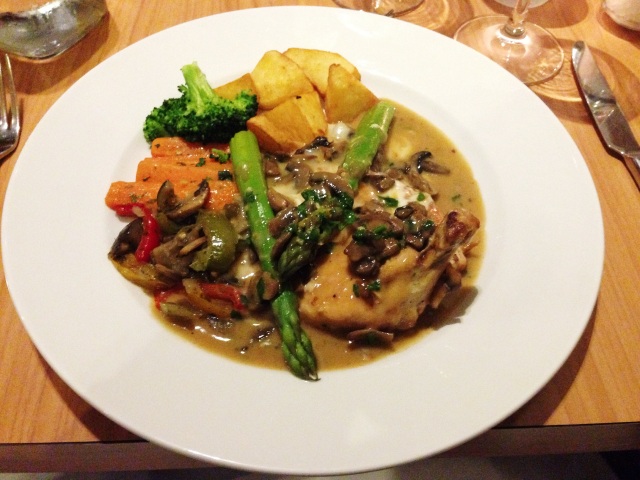 After the mains it took a little while for the dessert menu to arrive which meant we just about managed to find room. All of the desserts are cold (which rather reminded me of an old fashioned dessert trolley – you can have anything you fancy, as long as it doesn’t require cooking) but the selection is a little better than the average tiramisu, ice cream, chocolate brownie selection at so many other traditional restaurants. We went for the torta al cioccolato con amaretto: a generous slab of thick, rich, chocolate ganache flavoured with Amaretto on a thin, crisp biscuit base (so big I was glad we shared it, and I’m not normally one to baulk at a challenge in restaurants). It came with a scoop of smooth vanilla ice cream, which I quite liked, and a gigantic puddle of single cream, which I thought was baffling and unnecessary. Still, it’s a minor complaint about a really good, very tasty block of chocolatiness. 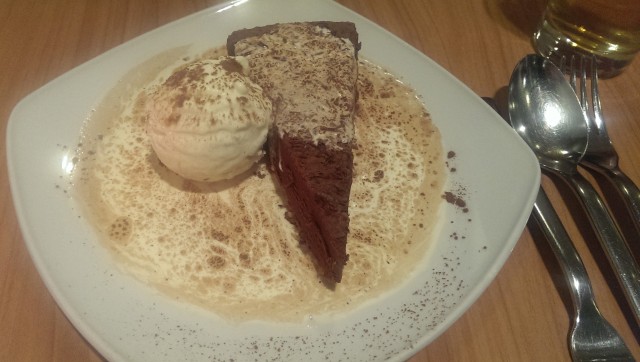 Service was probably the most surprising element of the whole evening: it seemed like I was visiting a completely different venue to the one I’d read so many glowing reports of on TripAdvisor. The (senior?) waiter seemed a little distracted, although he did offer a liqueur on the house at the end of the night. The waitress was doing the majority of the legwork – taking orders, carrying plates etc. with the bare minimum of human interaction but without ever really seeming like she knew what she was doing. At one point, after we’d finished a course, she asked “Was your food fine?” rather than “Did you enjoy your food?” and it felt like a Freudian slip, suggesting that they were aspiring to adequate.

The total bill, for two starters and mains, one dessert and half a bottle of wine was fifty-six pounds, excluding service. I know that’s not a big number but for the quality of the food, the atmosphere of the room and the experience I could have been in any one of Reading’s countless Italian chains. If you put Quattro next to a Jamie’s Italian – which, whether it’s authentic or not, has dishes that are full of interesting flavours and packed with fresh herbs – I would pick Jamie’s ninety-nine times out of a hundred, even though the service and the tone of the menu brings me out in hives (“lovely lamb lollipops”, anyone?).

I’m sure at least a few loyal customers will be reading this up in arms, and all I can say is that I’m sorry. The best restaurants feel like a club that you’re part of, but I didn’t feel like I was that night: perhaps if you’re a regular you have a very different experience. But it’s clear that Quattro’s doesn’t need a glowing review from me to fill its seats; it’s doing that anyway, with food that’s just good enough and service that has enough people going back time and time again. But I just didn’t get it at all I’m afraid. For me, the food was a bit like the wine list; traditional, unsurprising, ever so slightly uninspiring. For everyday dining that’s right on your doorstep maybe that’s all you really want, but to get me across town to Caversham I’d need more. When even the waitress can’t remember the specials, it’s just not special enough.