N.B. As of August 2020 Giggling Squid has reopened.

Although most ER reviews are of independent restaurants, I’m not against chains for the sake of it. Not all chains are the same: there are big and small ones, good and bad ones – just as there’s a difference between the silver chain you’d hang a pendant from and the lunking great thing you’d use to secure your bike to the railings.

I was struck by this wandering round Henley on a sunny Bank Holiday Monday, because they have chains just like Reading does, only different ones. So there are shops like Space NK and Joule’s – the next tier up, you could say, places in the same bracket as Jigsaw and LK Bennett. It’s the same with cafés and restaurants, so Henley has a Maison Blanc, a Hotel du Vin, and a CAU. I did briefly consider going to CAU to find out what we had to look forward to when the Reading branch opens this month, but nothing about the décor appealed: the nasty rigid white chairs and sterile banquettes screamed “downmarket Gaucho”.

Besides, I was on my way to a more intriguing phenomenon: Giggling Squid has grown from a single branch in Hove six years ago to a chain of thirteen restaurants (many of them opening in sites which used to belong to other chains – a handful used to be branches of Strada, Henley’s was previously an ill-fated Brasserie Gerard). And there are more on the way – the management wants to make this the first nationwide Thai chain, with plans for somewhere between fifty and eighty sites. It’s funny how, despite the popularity of Thai, Indian and Chinese food they still tend, by and large, to be chain-free zones (unless you count the delights of Ken Hom’s Yellow River Café, one of the Oracle’s first ever tenants way back when). I’ve never understood why that is – was Giggling Squid going to challenge that status quo?

It’s a lovely old building at the bottom of Hart Street and it’s been done up very nicely. On the way there I walked past Henley’s long-serving restaurant, Thai Orchid and it was the picture of an old-fashioned Thai restaurant, all dark wood, ornate panelling and intricate, inlaid, glass-topped dining tables. Giggling Squid couldn’t be more different, with its pale walls, exposed beams and almost Scandinavian bleached bentwood chairs. The front room, where I sat, was more traditional – the big room at the back was much better lit and I’d rather have sat there, but I didn’t have much choice in the matter. Which brings me to the second thing I noticed about it: it was absolutely rammed (I was lucky to get a table at all without a reservation, and quite a few couples who came in after me were turned away).

Giggling Squid bills itself as “Thai Tapas & Thai Restaurant”. The idea of anything other than Spanish food describing itself as tapas makes me feel a little exasperated, but what it essentially means is that at lunchtime, rather than having a traditional a la carte menu the main options are one of six “tapas sets”, each of them a mixture of three different dishes and jasmine rice. You can order lots of tapas separately instead, although I’m not sure why anyone would unless you really disliked the set combinations, or you can have what they describe as “one big dish with rice” or a “two dish meal combi”. This all felt overly complicated for me – did I want one big dish, two middling dishes or four small dishes? was there an option of having eight minuscule dishes? – so we went for a tapas selection each. And some prawn crackers. And some chicken satay (which by my reckoning makes a total of ten small dishes, sort of).

Despite the restaurant being extremely busy everything arrived very quickly indeed. Prawn crackers came in a metal pail and were good but unexceptional. It was a huge portion of crackers and an absurdly tiny ramekin of sweet chilli sauce – I couldn’t help feeling I would have liked less crackers and more dip, but they were pleasant enough and lasted just until the rest of the food turned up.

So, on to the tapas (if I really must call it that) itself: a square plate divided into four with something different on each section. Much as I might have wanted to turn my nose up at the concept I couldn’t fault the food. Shredded duck spring roll was a huge thing, full of dense strands of duck, served on a surprisingly subtle puddle of hoi sin that wasn’t just relentless sweetness. Prawn toasts were much better than I expected, crispy and light with a gorgeous layer of toasted sesame, served with more of the sweet chilli sauce. Salt and pepper squid was not at all chewy and the batter was beautifully light (maybe too light, as it did fall off the squid the moment it was challenged with a fork) served on another puddle of sauce – this time hot chilli with no sweetness. The beef salad was the cousin of the chicken salad I raved about from Art of Siam – soft, tender strips of beef on top of a bowl of salad filled to the brim with hot, sharp, sour sauce. It was agony and ecstasy to eat and would be perfect for anyone with a bit of congestion – the heat would soon clear that up. 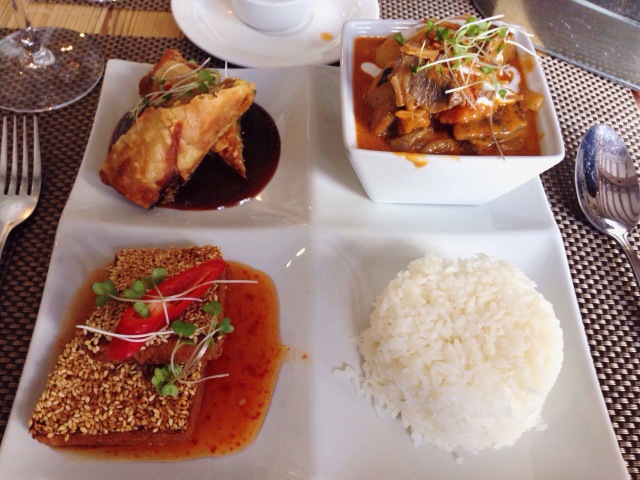 Because of the set combinations we’d gone for (“Two Giggling Squids” and “Wealthy Squid”, I have no idea why they’re called that, so don’t even ask) we had massaman curry two ways. The lamb was gorgeous, slow cooked and reassuringly free of wobble and the chicken was in tender, slender slices. There were nice firm chunks of potato, lots of onion and a healthy (or unhealthy, depending on how you look at it) sprinkling of crispy fried onion on top. The sauce was perhaps a little subtler than I’m used to but still went beautifully with the rest of the rice – and I’ve always thought, and said many times, that the rice and sauce at the end of a Thai main course is the best bit. 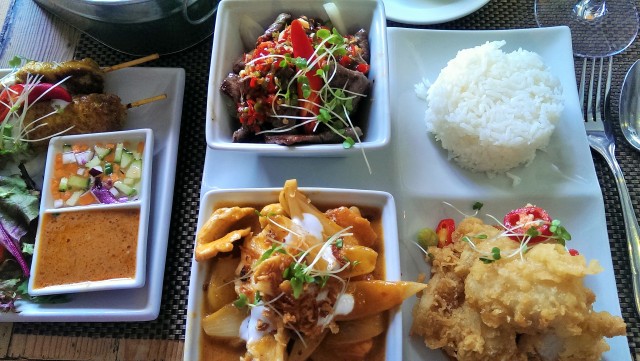 The chicken satay, ordered as an extra out of curiosity, was probably more food than we needed but again, it was very good: tender, soft chicken, not dried-out fibrous breast meat, easy to slide off the skewers and dunk in a fresh clear dipping sauce or a spiced but fragrant satay sauce that was a lot more than hot Sun-Pat. We finished the lot, although it put paid to any plans I had for dessert – a pity, as I had my eye on the black sesame ice cream. Still, there’s always next time.

The menu, come to think of it, was full of little flashes of personality like that which made it feel a lot less like a chain. That really came across in the wine list in particular which managed that rare trick of getting a slightly irreverent tone without making you want to cringe. Written by the co-owner, it compared the Chardonnay – described as something like “rich and fruity” – to her husband before mentioning the extensive research he had done trying to find some reds that went with spicy food. That sort of thing might make your toes curl, but I found it oddly charming (oh, and we had a couple of glasses of the Chardonnay: if her husband is anything like that she could have done an awful lot worse).

Service was harried but friendly. It felt difficult to get attention right at the start, but given how popular the place was I was impressed by how efficient they were; at the end, when the lunchtime rush was fading out, the waiters were a lot more friendly and interested. We went from sitting down to being out of the door in just over an hour which I think is fair enough on a busy lunchtime, especially when you’re only really having one course. Lunch for two – two tapas sets, prawn crackers, chicken satay and two glasses of wine – came to £40 with a semi-optional 10% service charge on top. The tapas sets were just under £12 each, which I thought was pretty decent value.

The owners of Giggling Squid have talked about Côte as the chain they’d like to emulate and I can see why – it’s a great example of how a chain can get everything right and be consistent without being faceless. And I think Giggling Squid does that too; I liked almost everything I had, it’s a lovely spot, it’s very tastefully done and the service is good. I do wonder, though, whether the reason they haven’t chosen to target Reading is that it already has three well-established Thai restaurants with good reputations – the kind of day-in, day-out consistency that is the brand promise of most chains. I wonder too what Giggling Squid will be like if it hits its targets, has a hundred branches worldwide and takes over all the vacant Stradas, Bella Italias and Café Rouges out there. But that’s all years ahead: in the meantime, it’s worth going so you can say you were there in the early days (or back when it was good, depending on how it all turns out). I might see you there, because the whole experience made me want to go back – partly for that sesame ice cream, but mainly to try the evening menu, which is so packed with tempting-looking fish and seafood dishes that I literally wouldn’t know where to start.

One thought on “Giggling Squid, Henley”