Cafe Madras was closed as of January 2018. I’ve left the review up for posterity.

One thing I’ve not yet acquired, despite writing this blog for nearly two years, is that unshakeable self-belief that many proper restaurant reviewers have. I really do envy them; it must be lovely to be so certain that you’re right about good food and bad food. I’m not even able to fake that, so every time someone visits a restaurant based on a good ER review and likes it, I feel like I’ve dodged a bullet. And when I don’t enjoy somewhere, I always wonder whether it’s just me, whether the off-day was mine rather than the kitchen’s. Eating at Café Madras this week reinforced all of those suspicions: I didn’t enjoy it, but it felt like I could find at least a few reasons why that might have been my fault.

For a start, I over-ordered – three starters and three mains between two seemed like a good idea on a ravenous school night, but by the end of the starters I could already feel a creeping, heavy fullness that left me uncertain about how much headway I would make into the main courses. Also, at least a few of the dishes were similar enough that you could argue that I’d just chosen badly – kush ka fried rice, a dry dish full of onions and spice and little shreds of what looked like lamb felt very similar to the lamb kotthu, another stainless steel bowl of broken up paratha, minced lamb, onions. Both dry (even with the accompanying bowl of yoghurt), both slightly heavy going.

When I left disappointed and walked down the hill into town, I felt uneasy that maybe I had let the restaurant down rather than vice versa. After all, the service had been lovely throughout – the man serving me was friendly and interested, suggested dishes from the specials menu and looked after us brilliantly. The room, although basic, was nice enough and had a steady stream of customers, some solo diners, some smaller groups of friends or couples, one large family. At least a few appeared to be repeat visitors.

The site itself, up at the top of Whitley Street, has a complex history. When it opened as Chennai Dosa in 2009 Reading had seen nothing like it. People queued round the block to get in for authentic, inexpensive South Indian food. Then Chennai Dosa moved into the centre and, for reasons I can’t entirely remember, the site rebranded as Café Madras in 2011. Last year it had the dubious honour of being one of Reading’s only restaurants with a zero star hygiene rating from the council – since then it has come under new ownership, turned that rating around and is clearly trying really hard to live up to its original promise.

So, there you go: I’ve outlined lots of reasons why I could pull my punches. And it would be really easy to do that, because nobody enjoys criticising an independent restaurant, especially one where the service is excellent. Especially one, for that matter, in an area like Katesgrove which is crying out for some – any – good neighbourhood restaurants. But it all comes down to the food, and the more I thought about it more I realised that there was something disappointing about nearly everything I ate that night.

So Gobi Manchurian, for example, wasn’t the delicate delight it can be (and is, at other restaurants in Reading) – the batter was thick and heavy, the florets of cauliflower underneath just a little too hard. The oily slick of sauce at the bottom of the bowl made me wonder just how much fat was sloshing around in my stomach. Similarly the special chicken tikka – recommended by the waiter – sizzled attractively and some of it was nice enough, but the inside of a couple of pieces, though certainly not raw, was firm and bouncy in a way that chicken tikka really should not be. Only the masala vada – circular lentil patties, like flattened bhajis – bucked the trend, being crispy, nicely spiced and beautiful with the thickened yoghurt on the side, speckled with nigella seeds. That was the only dish we finished all evening. 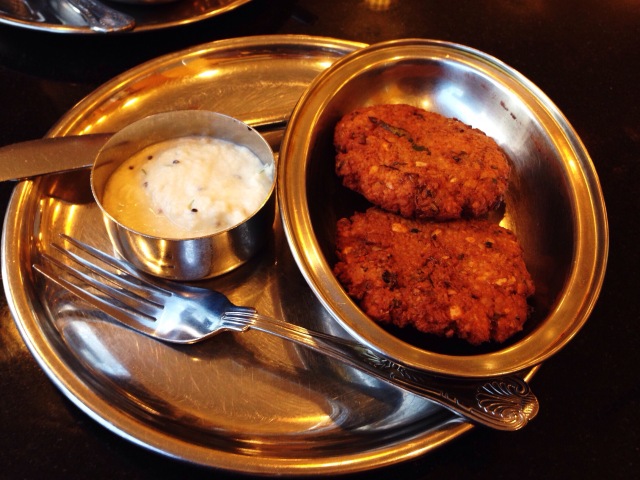 Even if I hadn’t been approaching full at high speed, I still think the main courses would have disappointed me. I could see that lamb kotthu might have been wonderful warming food if you’d grown up on it, an exotic cousin of the shepherd’s pie, sticky and rich. But it was just a tad too claggy and almost sweet, and the big chewy lumps of paratha felt like harder work than I associate with comfort food. Paneer masala, deliberately chosen as a meat-free main, had a lovely smoky sauce but, again, was a little too oily for me to feel like making significant inroads. We counted around half a dozen not very large cubes of paneer floating in it. By the end it had degenerated into a vegetarian fishing expedition bobbing for cheese, one about as successful as most fishing trips.

The best of the mains was the one I had lowest expectations of – the fried rice was packed with seeds and spices, onion and egg, small subtle strands of lamb (and a little shard of bone, as it happens). It was gorgeous and complex, with a heat that kept on growing and developing. But I didn’t really appreciate it at the time – only a couple of days later when I took my leftover rice to work (the waiter having kindly packed it up for me) and microwaved it in the kitchen did I realise just how good it was, mainly because of the envious remarks from my colleagues who were ploughing through their frigid, miserable supermarket sandwiches. But reheating my memories of the meal didn’t have the same happy consequences: it was still far more misses than hits, even if my aim could have been slightly better.

The meal – three starters, three mains and the grand total of four slightly too smooth, slightly synthetic-tasting mango lassis – came to thirty-four pounds, not including service. A cheap meal, and one that could have been even cheaper, but even at that price a curiously underwhelming one.

One of the big questions I ask myself when reviewing a restaurant – usually at this point in a review, as you may have noticed – is “would I go back?” If Cafe Madras wasn’t so far out of town, or if it was in my neighbourhood, I think I probably would. And I’d find the things on the menu that suited me better, I’d get to know the staff, I’d take their advice, and it could be a restaurant I’d learn to love. If you live in Katesgrove, you may have learned to love it already. But it isn’t any of those things, and the South Indian restaurant that is in the centre – Chennai Dosa – moved there from this spot, for very good reasons. So would I go back? The answer is the most frustrating one of all: nearly, but not quite. I don’t have the unshakeable self-belief to tell you not to go there. But I can’t recommend that you do.

One thought on “Cafe Madras”