Loch Fyne closed in February 2018. I’ve left the review up for posterity.

I’m probably as surprised to be writing a review of Loch Fyne this week as you are to be reading one. But it occurred to me recently that, despite it having been here in Reading for as long as I can remember, I’ve almost never visited. I’ve been to the branch in Henley, on the smart side of the market square, and had a light lunch in their sunlit courtyard (before going to the Rewind Festival, as it happens – nothing quite like the poignancy of hearing Johnny Hates Jazz performing “Turn Back The Clock” now Clark Datchler actually wishes he could). And I’ve been to the one in Oxford, a beautiful, big stylish space, the roof a mixture of beams and gleaming shiny pipes. But I always forget about the Reading branch, down by the canal, the wrong side of the Oracle on the edge of the Holybrook estate.

Like the others, it’s beautiful from the outside – a lovely large redbrick building overlooking the Kennet (it used to be a brewery, apparently) with a terrace out the front which many Reading restaurants must envy. But stepping inside it’s a different story: the tables and chairs are starting to look a little tired and the stairwell that runs through the centre of the building makes some of the tables on the ground floor a little dark and stranded. I know this for a fact because, despite many tables being unoccupied on a weekday evening, the waiter decided to plonk us at one of the dark, stranded ones. My fellow diners got to look out on the remains of the daylight on that terrace, or gaze out across the river, whereas I got a view of the disabled toilet. Lovely.

The options were, as you’d expect, mostly fish based (“from the sea” according to the menu, just in case you didn’t know) but with a few meat dishes (“from the land” – I know, it’s pretty educational stuff). In fairness, Loch Fyne’s meat supplier is Donald Russell, the excellent Scottish butcher, but it seemed only right to stick to the fish dishes as that’s what Loch Fyne is famous for. After all, nobody goes to Nando’s and orders the “Prego Steak Roll” – not anyone I’ve ever met, anyway. So if you really don’t like fish, this review won’t be for you I’m afraid – and now you know how vegetarian ER readers feel three weeks in every four.

The first starter was the special – potted Bradan Rost (Loch Fyne’s own trademarked hot smoked salmon) with watercress and granary toast. Now, I think of a potted dish as being spiced and topped with clarified butter, delicious spread on decent bread. This was, sadly, more like mashed, cooked salmon with dill added, popped in a glass jar and then chilled. It was potted, I suppose, in the sense that they’d put it in a pot (in the same sense, in fact, that my main course could have been described as “plated fish”).

The Bradan Rost itself was tasty – rich and smoky with a firm flesh – and I probably would have liked a fillet of it which hadn’t been mucked around with. But when it was mashed and spread on dry bread it was far less appealing. Some butter for the toasted bread would have rescued the situation somewhat, although of course if it had actually been potted salmon this wouldn’t have been a problem. Oh, and the watercress was the final nail in the coffin – a little pile of green in the middle of the plate that looked a little like it had been run over. Vegetarian roadkill – the perfect finishing touch to any dish. 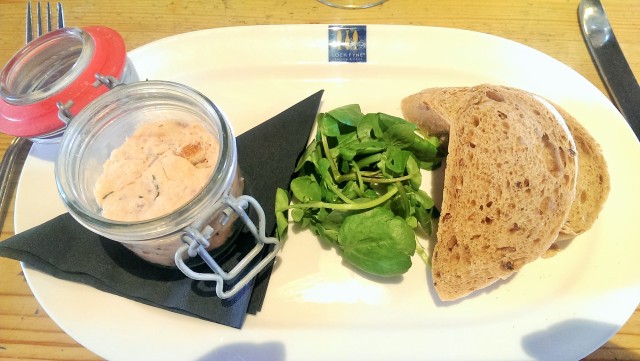 The other starter was described as “haggis with scallops”. This was also misleading to an extent verging on cheeky; I counted the grand total of one scallop, cut thinly into three slices (although that did make the coral, which I don’t usually enjoy, surprisingly tasty). Maybe they expect people to be fooled by this sleight of hand: I wasn’t. The kitchen’s knife skills were equally evidenced by the caramelised pear, although I did feel it wouldn’t have been asking too much for them to peel it first. It was pear all right, but it didn’t feel especially caramelised. You needed a similar ability to cut things into very small pieces to make the starter last very long. It was a tasty, pretty little thing (you never go far wrong with haggis), even if the lemon beurre blanc wasn’t really anywhere to be seen, but the whole thing prompted an overwhelming feeling of Is that it? followed shortly after with another of Is that it for eight pounds? It felt like the kind of starter you could only truly enjoy on an expense account.

We had a glass of white wine each with the starters: a nice, if unremarkable picpoul de pinet and a zesty South African chardonnay, both of which were decent but not quite as cold as they should be (there was a certain symmetry to that, as my feelings towards the restaurant weren’t as warm as they should have been). By the end of the starters, which came out pretty quickly, we had got most of the way through the glass and had to decide whether to order another. We guessed that the mains wouldn’t take long to arrive so decided against a second glass. I didn’t get a huge amount of satisfaction out of being proved right, but sometimes the only certainty in a restaurant is that disappointment is lurking around the corner.

Of the mains, the first – poached smoked haddock on colcannon mash with a soft poached egg and a wholegrain mustard sauce – jumped out from the menu because it ticked so many of my boxes. I know it doesn’t sound like summer food (although, so far, it hasn’t much felt like summer) but I fancied something comforting and I couldn’t imagine anything better than poached fish and mash. It was pretty – a huge mound of steaming hot mash, a decent sized piece of smoked haddock (undyed, as you can tell from the photo) and a perfectly poached egg oozing sunshine yellow on to the rest of the dish.

It all sounds promising but, yet again, there wasn’t enough to like about the dish. The sauce round the edge had a skin on it, which suggested it had been sitting on the pass for a while, and it was oddly bland; if it hadn’t had mustard seeds speckled throughout it I’d have struggled to tell you what it was supposed to be. It should have been tasty and hearty, but the smooth texture of the mash (even with a few strands – nowhere near enough – of cabbage running through it), the gloopy nondescript sauce and the egg yolk added up to a big bowl of something like wallpaper paste. I polished off the haddock and left a fair amount of the rest. It seemed throughout the meal that Loch Fyne had really good fish, but little idea what to do with it.

The second main was from the fish bar. A nice idea, this: you get a piece of fish of your choosing, grilled steamed or fried, with a sauce of your choice and two sides. My fried cod looked promising but again it was underwhelming – lovely thick flakes but no apparent seasoning and a soft, flaccid skin on top (which is the whole point of ordering it fried in the first place). I would describe it as just hot enough – which made it considerably hotter than the samphire which accompanied it. Hot and well cooked, samphire is one of the most beautiful things you can pair with fish. Lukewarm and clumpy, it isn’t. I left a fair amount. Salsa verde tasted better than it looked – beautifully sharp and clearly made with lots of capers but the sludgy colours and coarse texture made it feel more like Boden mushy peas than the green, fresh sauce it should be.

The best of the lot were the twice cooked chips, which were among the best chips I’ve had in Reading (only Forbury and LSB come close, from recollection). Beautifully crisp, rough outsides, lovely fluffy middles; if they’d just served me a portion of those, some bread and butter and some Heinz red sauce I’d have spent a lot less, left a lot happier and given a much higher score. They came in a metal beaker – because that’s how everyone serves chips these days, unless you get a tiny fryer basket – and at the bottom was a pale, unremarkable looking stowaway French fry. It reinforced the fact that this order was probably the only really good choice I made all evening.

Aside from a friendly greeting at the door (by the manager, possibly) service was probably best described as apologetic. That was behaviour which made more sense as the evening went on: certainly by the end, there was a fair amount they could have apologised for. Not that I was ever invited to give any feedback which would have prompted an apology – tellingly, when clearing the plates away we were asked if we were finished but never if we’d enjoyed it. Even when the half full plate of wallpaper paste was collected there was no question or comment. Did they think that was normal behaviour from diners? Did they know the food wasn’t up to scratch? Or did they just not care? It was impossible to tell, but none of those explanations reflect well on anybody.

We didn’t have dessert. I felt like Loch Fyne had had quite enough of my money by this point: the total bill for two courses and one glass of wine each was fifty four pounds, excluding tip. The whole experience took just over an hour, and diners were still turning up as I was leaving. I hope they had more fun than I did, although they could have easily managed that playing Scrabble or eating a packet of Quavers instead.

I can never decide whether Loch Fyne is an upmarket chain or not. I saw a fair few date nights taking place during my visit – a few sparkly tops (and one I might even describe as “ritzy”, with all the connotations that word carries) and smart jackets giving the game away. But I couldn’t help wondering, based on the evening, whether they might have been happier in Henley, Oxford or even Wokingham. Perhaps I was a bit jaded – after all, they’d spent the evening gazing into each other’s eyes and I’d spent it looking at the door of the disabled loo. But I think maybe what Loch Fyne really illustrates is that not only are there good chains and bad chains but that, despite the promise of uniformity implicit in a chain restaurant, there are also good branches and bad branches. And Reading, I’m afraid, is saddled with the latter. You might get a better deal if you turn up for the thirteen pound, three course, not hugely exciting set menu. But really, why would you bother? The one thing I’ve learned from Loch Fyne isn’t where fish come from, it’s that – where restaurants are concerned – there are plenty more of them in the sea.