I spotted The Sushi Maki earlier this year, on a trip to Newbury to pay a return visit to Brebis, one of my restaurants of last year. I literally did a double-take when I walked past it, on the market square: A sushi restaurant? In Newbury? Not only that, but it looked lovely – lots of little tables with people huddled round them on tasteful wooden seats which looked like a cross between chairs and stools, along with a row of diners lined up at the bar. It was bright and buzzing on a Saturday night, and I did that thing I often do when I pass a restaurant I like the look of: I slowed down to a stop outside the menu, read it and made an extensive mental note before moving on.

This is a pipe dream I know, but I occasionally daydream about getting some cool Edible Reading business cards printed and dropping them off surreptitiously in restaurants and cafes to try and spread the word. Although I can picture the front perfectly (the lion logo, printed on crisp good quality card stock) the words on the back are harder to imagine. Would it just have the website link? A quick biography of some description? One thing you could definitely include in the blurb, though, is this: Will travel for sushi.

Well, if you live in Reading you kind of have to (once you’ve tired of Yo!, anyway). But I don’t find that a hardship, because I just adore the stuff. Done well, sushi is a real art form – in the literal sense – and so once I clapped eyes on The Sushi Maki I knew that going back was inevitable, if only to see whether it could supplant Misugo, my go-to sushi restaurant in Windsor, in my affections. After all, Newbury is an awful lot easier to get to – a nicer train trip, out through the beautiful West Berkshire countryside, with none of the horrors of changing at Slough.

Returning for a weekend lunch visit the place was much more serene, but if anything with less people you could see even better what a little, tasteful restaurant it was: a handful of high tables, seats at the window and along the bar, capacity for barely more than twenty people. Smart without trying too hard, a look I particularly admire. Each place was laid out with a small bowl for soy sauce, a red paper napkin and a pair of chopsticks – just the right side of the divide between pared back and austere.

I once read somewhere that in Japan restaurants specialise, so you’ll get a sushi restaurant, or a yakitori restaurant, or a ramen joint. In that sense if no other, The Sushi Maki is authentic: the menu is small, without the distraction of bento boxes, rice or noodle dishes, katsu curry or big plates of tempura. Instead it really is practically all sushi and sashimi, mostly familiar combinations with a few daily specials up on the blackboard behind the bar.

Now, from here on in it starts to get tricky. Much as I love sushi, it turns out that it’s quite difficult to write about, mainly because it’s all variations on a theme – rice, fish and, well, some other stuff. And there’s only so much you can do to lift the monotony, especially when the main other thing you’re eating is sashimi which is made of, err, the same fish you’ve just had in the sushi, most likely. So if what follows is a bit too much like a list I’m sorry, and you’ll have to take my word for it that it was more fun to eat than it was to read about.

We started with the sushi roll selection – four lots of four sushi rolls, the daily special up on the chalkboard. Some of this was downright beautiful like my favourite, the crunchy tempura prawn, all light clean flavours, a swoosh of teriyaki on top with – and I’ve never tried this before – what seemed to be crisped rice on the outside. The same technique was used in the spicy tuna roll, which was equally tasty (although it looked like there was mayonnaise inside, which I found a tad strange). Snow crab and cucumber rolls had that jarring mayo too but even so they were a delicate delight, with shreds of crab meat and laser cut slim batons of crunchy cucumber, specks of white and black sesame seed dotted around the outside (how I love sesame!). Last but not least, the salmon and tobiko roll was probably the closest to the kind of thing you’d pick off the conveyor at Yo!, salmon and avocado on the inside but loads of tobiko – bright orange roe – on the outside (not everyone will like the idea of that, but I take a certain childlike glee in feeling those tiny spheres burst between my teeth). That selection, sixteen pieces for fourteen pounds, felt like decent value. 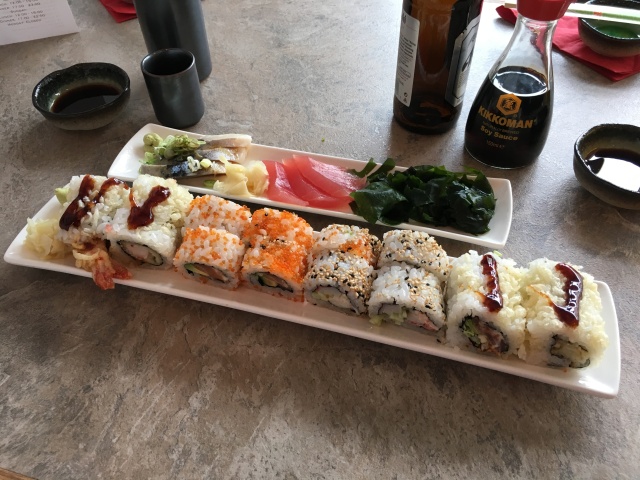 We did go for a second round of sushi, out of pure gluttony. I had to have the spider crab roll because soft shell crab is one of my favourite things in all the world (how do these poor creatures survive when they’re so fragile and so delicious? I’ve always wondered) and it didn’t disappoint. The crab was lightly battered and fried – fairly recently, I’d guess, because it was still warm – and formed the centrepiece of big, thick sushi rolls topped with more of the teriyaki sauce and, in something of a kitchen sink approach, more of that tobiko. Only the avocado maki disappointed – the avocado was in big buttery chunks, but the maki weren’t well rolled and the seaweed didn’t quite meet perfectly. Still, bad avocado maki is better than no avocado maki, or indeed good most other things (except Frazzles. Gotta love Frazzles). 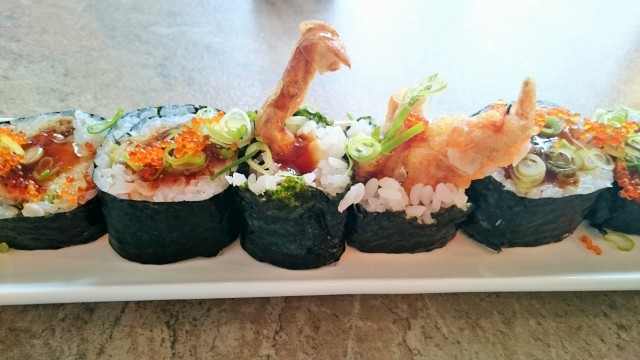 Oh, and we also had something called “sunshine roll”, mainly because of the name, with sweet prawn and cucumber inside, pieces of salmon sashimi draped on top and some more teriyaki sauce and tobiko to finish it off. This was so big that biting into it would have caused it to collapse, so instead I simply distracted my companion (“is that a wolf spirit fleece that woman is wearing?”), unhooked my jaw and gave it my best shot. I just about pulled it off. Anyway, the sunshine roll was quite nice, if not standout, and by this point I did feel like I was just eating something which felt like a slightly different permutation of everything I had eaten before. And that was the problem with the sushi in general, I think. It was nice. It was pretty. It was delicate. But it was all a bit lacking in distinct personality. Or maybe I just ordered too much of it, although I’m struggling to process the concept of too much sushi.

I also tried the sashimi, out of a combination of completism and gluttony. It was all good quality, beautiful sections of marbled fish and, just like the sushi, tastefully presented. But here I was mainly struck by how much you paid for how little. So the usual suspects, the salmon and tuna, were both lovely specimens – but three pieces of the latter cost you five pounds fifty. The mackerel (three pieces for a fiver) was also delicious and came topped with spring onions in soy, one of the only attempts to jazz up the presentation at all. Again, I liked it but I was very aware that down the road in Windsor you get more sashimi for less money, and you also know it comes from the fishmonger practically next door.

The drinks were good. I had a couple of thimbles of sake (50ml each, apparently) that had a gorgeous almost sweet taste which became even better once I’d started eating the sushi, all smooth with just a hint of banana. It was at room temperature and personally I’d have preferred it chilled, but maybe that’s me being a sake heathen. My companion has a thing about drinking beer with sushi – your guess is as good as mine – and apparently the Asahi was lovely. Service throughout was polite and quiet, almost shy, although neither the waitress nor the chef appeared to be Japanese (and neither was the name on the license, to my Western mind). The restaurant was busy with groups, lone people and a fair bit of takeaway trade but I never felt ignored or neglected and the total bill for rather a lot of food, plus two drinks each, was sixty-four pounds excluding tip.

So, a nice lunch then. But nice enough? Hmm, probably not quite: at some point in the meal – possibly in between the first batch of food we ordered and the second, failing that definitely between finishing the second batch and the bill arriving – I started to realise that The Sushi Maki was not going to become my go-to sushi place. It’s not a bad restaurant, by any means, and if it was in Reading I would probably go there quite often. The people of Newbury are lucky to have it right in the centre of town, and I can see it would be a good place for a light lunch, but I couldn’t imagine spending an evening there or it being a destination of itself. I found myself longing for the low tables at Misugo, the atmospheric lighting, the wider menu. Eventually, I just found the stools a little bit too high and uncomfortable, the tables a little bit too cramped, the sushi a little too pricey, and I’m afraid that’s the moment – pardon the pun, but it’s been coming for the whole review – when the scales fell from my eyes.