I’ve never reviewed the French Horn in Sonning, for one specific reason. Not the prices, although when starters hover around the twenty pound mark and main courses edge closer to thirty it does get harder and harder to say “hang the expense”, convincingly at least. It’s not the faffiness of the menu, although the French Horn’s Habit of Capitalising Pretty Much Every Word does lend Proceedings a Weirdly Dickensian Feel. It’s not even the fact that the menu seems to have an asparagus with hollandaise sauce on it all year round at twenty quid (is it flying first class from Peru?).

No, the reason I haven’t gone to the French Horn is that I’m reliably informed it has a dress code, and I just don’t do dress codes. It feels like a throwback, and something about getting into my glad rags just really rankles. I mean, I’m the customer aren’t I? And it’s not like I’d turn up in a crop top or a string vest, hot pants or swimming shorts; I’ve eaten at lots of lovely restaurants just the right side of well turned out and never been turned away, but when somewhere pompously announces they have a Dress Code (those Dickensian capital letters again)? Count me out.

What that means is that Nirvana Spa is probably the only place I will ever review which does have a dress code. And when I say dress code, I mean that you eat your lunch or dinner in a lovely white fluffy robe, your towel nonchalantly draped over the back of your chair and – in my case – your trashy paperback perched on the table. And if you go on a warm day, like I did, you get to do all of this outside, beaming at everybody else, similarly attired. This must be a bit like how it feels to be in a cult, or live in California (or both), I’ve always thought.

Sometimes I review restaurants and I’ve had a bad day first. I love writing reviews, but it’s a bit like a job – admittedly a job I adore – and there are times when you go and your heart isn’t one hundred per cent in it. Things are crap at the office, or the car failed its MOT, or you’re out of sorts with a friend, or Britain has voted to leave the EU and you still have to go out, eat with an open mind, take photos and write hundreds of words about what it was like. Hopefully you can’t tell in the words or the rating, if I’ve done it properly.

Nirvana is the other way round, if anything – it’s hard not to be happy when your most difficult decisions that afternoon are whether to read Hello! or OK!, whether to have the honeycomb tiffin or the salted caramel ice cream in the Roman Room, whether to go to the hydrotherapy pool or snooze on the heated terra cotta loungers. How can you have a bad meal under those circumstances?

On the other hand, I went on a long-booked visit the Sunday after the referendum result, when there was a weird atmosphere across the country. That weekend was like waking up hungover with The Fear, not entirely sure what you’d said or done or to whom. To complete the irony, Nirvana’s owner had sent a controversial mail to members only that week “offering them the opportunity to read” an article he’d written about how Brexit was a very good thing (I half expected to arrive to find bunting everywhere). So, a happy place at a sad time: what would lunch be like?

The menu at Nirvana has two options – either all you can eat from the salad bar (which also features a number of hot options) for fourteen quid or the a la carte menu which has starters, sandwiches, salads and main courses. The salad bar is included if you visit as a day guest rather than a member and really, I ought to have eaten from it to give you a representative view. But I’m afraid I was in need of cheering up so I didn’t, although I can tell you from past experience that it’s not half bad (and especially impressive for vegetarians and vegans where it gives a range of choice you’d struggle to match elsewhere).

Instead I stuck to the menu, deciding to kick things off with a selection of artisan (everyone’s favourite ubiquitous, meaningless word) breads for two. I was denied the opportunity of doing this when they turned up at exactly the same time as the starters, but none the less they weren’t half bad, especially at less than two pounds. All warm, some slightly toasted, a good array with the dark malted one, studded with seeds, my particular favourite. Butter was at room temperature (which always helps) and it was nice to have olive oil and balsamic although, as so often, nowhere near enough.

The starters were less impressive. We’d both gone for salads and I wonder whether they had decided to prioritise virtue over taste. Smoked chicken salad was presented in a way almost deliberately calculated to underwhelm – a fan of smoked chicken on one side of the plate, your salad on the other. Not mixed at all, and the salad also appeared to be barely dressed at best. What’s a real shame about this is that it had potential to be a lovely starter if done better – the salad was full of firm peas and crunchy beans and would have been beautiful with a bit more dressing and the smoked chicken, although a tad wan and floppy, did set it all off nicely. I seem to recall that the menu at Nirvana specifically says that you can ask for your salad dressing to be left off completely; it’s a pity it doesn’t also give you the option to ask for it be glugged on with abandon.

Similarly, the baked smoked salmon salad was an exercise in restraint. A handful of salad leaves lightly dressed, topped with a thinly sliced radish (singular, I’m guessing) with a few chunks of salmon dotted round the edge. I was expecting a tangible piece of salmon rather than these chilly fragments and considering it was the most expensive starter on the menu (nine quid, since you ask) it felt miserly. It came with a wedge of lemon, just in case you weren’t feeling bitter enough, and a few de-seeded slices of chilli, mixed in as an afterthought. If I’d made this myself with bits from M&S it would have cost half as much and been twice as big. A shame, because what there was was nice, refreshing and light. I was just glad we ordered the bread. 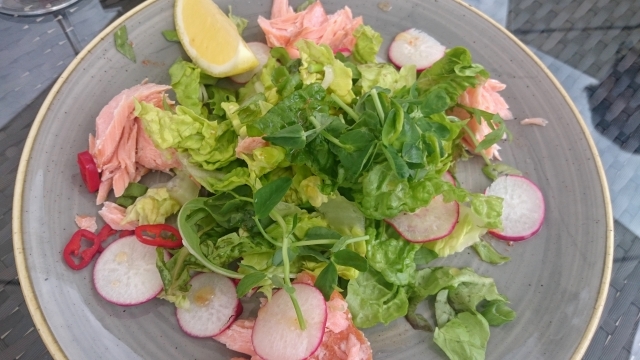 After all that the main course was a beautiful, delicious surprise. Fillet steak came with a delicious, nutty pearl barley risotto which I adored. I’ve had pearl barley risotto quite a lot in Prague for some reason but it doesn’t seem to crop up on menus here much, a shame because it has much more about it than conventional risotto often does. There was also a solitary carrot – fair enough, I suppose – and two beautifully sweet, shallots which had been cooked into softness. The fillet itself was rare, exactly as requested (I went back to CAU recently and they, a specialist steak restaurant, still seem unable to get this right: Nirvana 1, CAU 0) and although I would have liked it to have a little more flavour, the texture was terrific. Finally, drawing everything together, what the menu described as “oxtail sauce”, rich strands of oxtail strewn on top of the fillet and all over the pearl barley risotto. Sixteen pounds fifty for that lot, and one of the most interesting ways I’ve had fillet steak for a very long time; if this dish had been on the menu at a restaurant near me I’d already be trying to contrive an excuse to go back.

I also wanted to check out the lighter options on the menu, so we ordered a pulled pork wrap. This was just lovely: the thin flour tortilla was rammed full of really good pulled pork (smoky and sweet without being sugary as it so often is) with fresh, crisp, contrasting coleslaw. I liked the fact that it was served warm, too – so different from a cold claggy sandwich. It cost as much as the salmon starter, but felt like considerably better value. It came with a small leafy salad I didn’t much care for with a squiggle of creamy dressing, but perhaps I was just saladed out by that point, if such a verb exists. It might not have looked much in comparison to the fillet steak, but I thoroughly enjoyed it all the same.

Nirvana isn’t the place to order a dessert; you’re there all day after all, and saving some room for an afternoon snack is one of the only ways to break up the delirious monotony of being a modern-day lotus eater. So we finished our drinks (a decent glass of New Zealand sauvignon blanc for me and a rose cava for my companion), charged the meal to a membership card and ambled off in the direction of an outdoor jacuzzi. Two courses, that bread selection and a couple of drinks came to a smidge under fifty-five pounds. That doesn’t include service at Nirvana, but all the service there is smiley and friendly, on the informal side but none the worse for that. If they were elated or devastated about Brexit, they certainly didn’t give it away.

As I sat in the outdoor jacuzzi, wishing they let you drink bubbly in there, I did briefly wonder about whether you could separate Nirvana’s food from the overall experience of being at a spa for the day. I’m not sure. If you picked the restaurant up and plonked it somewhere else, aside from being perturbed that all your fellow diners were in robes, I think you would like but not love the food. Not just that, but some of the pricing seems strangely generous (that fillet steak main), some arbitrarily expensive (the smoked salmon starter). As so often, I wonder about the wisdom of giving a rating; I love being at Nirvana, I love eating there and yet eating there isn’t quite the point. But then I decided I’d thought about it quite long enough – the world outside appeared to be either taking back control or falling to pieces, depending on who you believe – and before long I would have to leave my hermetically sealed bubble and go back to it. I was glad my phone, with access to constant news, was stowed away in a locker.

Later on I did go to the hydrotherapy pool, by the way. Some of the massage jets weren’t working, and many of the handles you use to cling to the side were broken off. It’s been that way since the start of the year: it’s a shame the owner feels like he has better things to do than fix it.