The new year always presents a myriad of opportunities, doesn’t it? A fresh start (unless, like pretty much everyone I know, you’ve been struck down by one of the many virulent bugs doing the rounds). A chance to change your ways, shed unhelpful old habits and bin off toxic former friends. And, of course, it’s a time to embrace every passing fad for self-improvement, whether that’s kicking the booze or going vegan for thirty-one teeth-clenchingly joyless days. Fuck that, I thought, I’m off for a kebab.

Not just any kebab, I should add, but a German one: German Doner Kebab has been plying its trade since last April, at the grim end of Friar Street near the Hope Tap, the latest creepy topless bar and the big Sainsbury’s (Brutalist on the outside, faintly Stalinist on the inside). Now, I’m not snobbish about kebabs: I’ve always thought that, done right, they can be darned delicious and the best ones, cooked well, are more than acceptable eaten sober.

Generally, in fairness, I mean shish kebabs – there’s something about chicken or lamb cooked there and then on a charcoal grill that’s difficult to beat (let’s face it, there’s a reason I’m always singing the praises of King’s Grill). But a chicken or lamb doner, sliced thinly, cooked on the hot plate to add a little crispiness and mixed with ribbons of iceberg and a really good sauce? That’s the stuff of – admittedly slightly guilty – dreams.

More recently that has tended to be the shawarma at Bakery House, or gyros on holiday in Greece, but I still fondly remember the golden age of growing up in Woodley and having a doner from the van parked up by Bulmershe school, or, years later, stopping at the sadly departed “Kebab Kingdom” on Cemetery Junction.

That was twenty years ago, but I can still remember the crunch of the red cabbage and the kick of those pickled chillies like it was yesterday. Come to think of it, I can remember when you could eat in at Ye Babam Ye, in the bit which is now Up The Junction and just to prove that everything comes around again eventually, here I am in 2019 sitting at a table eating a doner kebab, the hot new (old) gastronomic trend. Maybe they’ll rebrand Wimpy next.

My accomplice for this review was the author of pub blog Quaffable Reading, a man who prefers to be referred to as Dr Quaff (honestly, these anonymous bloggers and their pseudonyms: it’ll never catch on). I had accompanied him last year when he went to review The Retreat, my beloved local pub, and this was part of a sort of exchange program where he joined me to review German Doner Kebab and in return we then went on to a pub afterwards so Dr Quaff could review that. You might say that we approached things in the wrong order: I couldn’t possibly comment, although you might have an idea of my view by the end.

Dr Quaff is – and he didn’t offer any financial inducement for me to say this, I promise – superb company with a huge range of stories which managed to be both funny and interesting. But he also has a surprisingly donnish air (that time up at Oxford, perhaps) and made for a very suitable co-pilot on this visit. He was also willing to order all the things I didn’t, which made for a refreshing change as I’m used to having my second choice of everything on the menu.

The interior managed to be a chic take on a traditional fast food restaurant. The overwhelming theme was monochrome – big black and and white photos of Berlin landmarks (the television tower especially caught my eye), a huge image of the Brandenberg Gate along one wall and smart black button-backed banquettes and booths. But there was also a flash of orange bringing the whole thing to life: you really couldn’t fault their branding.

“It looks very much like McDonalds tries to these days” said Dr Quaff, at which point I had to admit that it was a very long time since I had been to one, and even longer since I’d paid attention (still, he has kids). We ordered at the counter and plonked ourselves at a booth in what was, for a school night, a surprisingly busy restaurant. 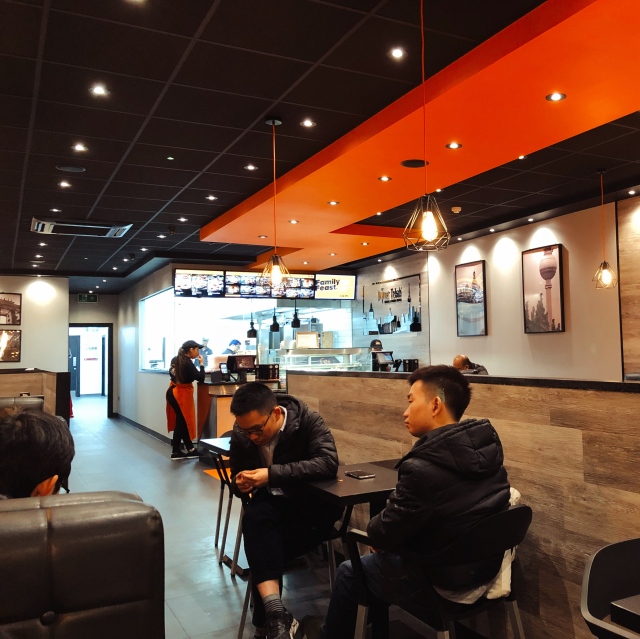 You can get the doner-based dish of your choice for roughly five pounds, or add fries and a drink for two quid, and for vegetarians there is a veggie kebab containing the suitably vague “mixed veggie pieces”. Even the choice of doner meat (beef, chicken or “mixed”) is more specific than that. Personally, I found it weird that there was beef but no lamb, but I decided to reserve judgment.

The first dish to turn up was the lahmacun (or, in this case I suppose, “beefacun”), a thin flatbread smeared in something which may have been beef or possibly just the memory of beef, folded over and served with three dips (chilli, garlic and burger sauce) along with a rather hopeful wedge of lemon. When I started this I quite liked it, but as it cooled down and started to taste more of itself I found I rather cooled down too. But taste of what? I wasn’t really sure – certainly not of beef, and hardly of spice either. It also went soggy quickly which made dipping it in the sauces largely a waste of time. “It’s sort of like a keema nan” said Dr Quaff, and although I knew what he was driving at it still felt like a disservice to keema nans everywhere. 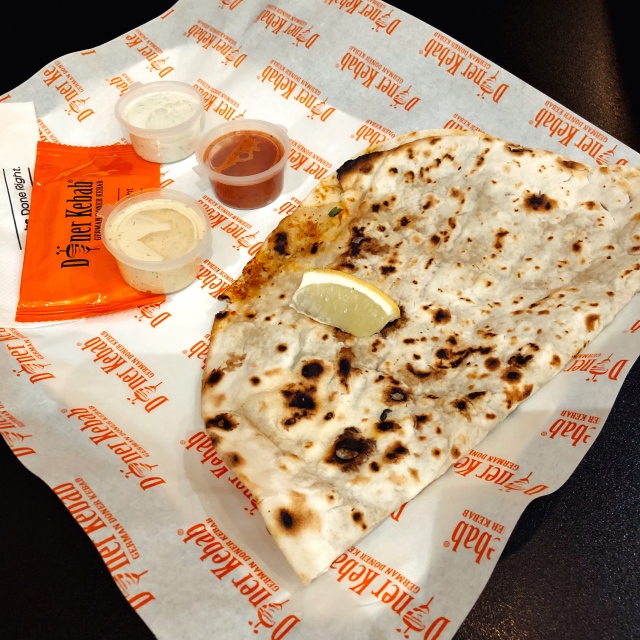 Dr Quaff had also gone for a side dish, the doner nachos. It was a classic example of the old adage that just because you can do something doesn’t necessarily mean you should: I don’t think the combination of tortilla chips, jalapeños, American squeezy cheese and doner meat is one the world was waiting for.

The beef doner meat, and this was a theme funnily enough for the rest of the meal, was plain bad. It didn’t taste like any beef I’ve ever had, and that includes some pretty dreadful beef: even overcooked into shoe leather the way my former mother-in-law used to do it at least vaguely tasted of beef. This, though, had no texture, so was just limp ribbons of the stuff, a disconcerting shade of beige and looking nothing like beef. It could have been shaved off a cow, a sheep, an actuary or E.T.: if you’d told me it was Soylent Green I wouldn’t have been remotely surprised.

Normally when I put photos of a dish on the blog I do a little editing to try and make them look as good as possible: their culinary best selves, you could say. With the doner nachos I just wanted to do my best to make them look exactly as they did in the restaurant. Adding warmth and saturation would be like adding a Snapchat filter to a Tinder profile picture.

“I thought they’d be smaller” said Dr Quaff. I was just glad I only had to have one forkful. 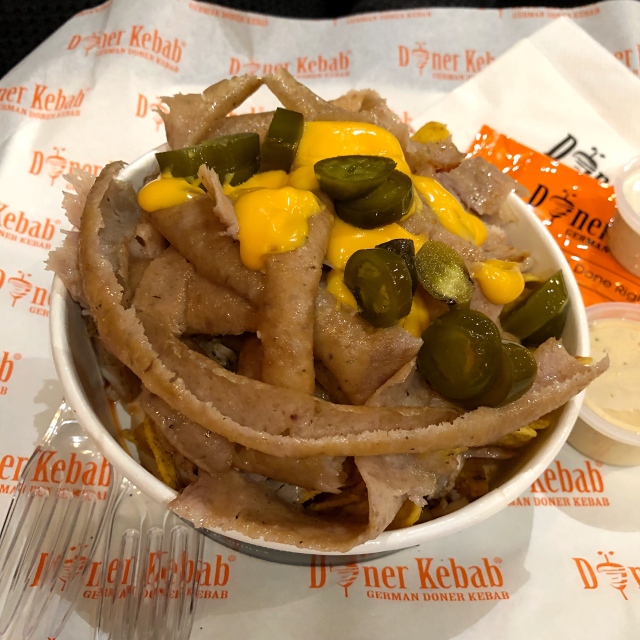 More of the doner meat was to follow in the main attractions. I had a mixed kebab in their signature toasted flatbread, while Dr Quaff had it in a lahmacun wrap. In terms of a vessel for the meat, his was a much better plan – completely contained, easier to eat and much less messy. I also think, overall, Dr Quaff enjoyed the whole thing more than I did: he also pimped his fries so, for fifty pence extra, he got “flaming fries” which were dusted with something which contained paprika but also hints of something like Chinese five spice. “It’s funny”, he said, “because it feels strange to pay fifty pence extra, but it’s definitely worth it”.

By contrast, the toasted bread had a very pleasing waffly texture but was open, which meant that everything would have fallen out if I’d tried to eat it with my hands. This did work to my advantage though, because I managed to remove much of the beef doner meat with a fork (and to think I was always bad at Operation as a child) and focus on the chicken. It was infinitely better: for a start it definitely felt like it might once have been attached to an actual chicken, and along with the salad and red cabbage it began to feel like something I would eat from choice. 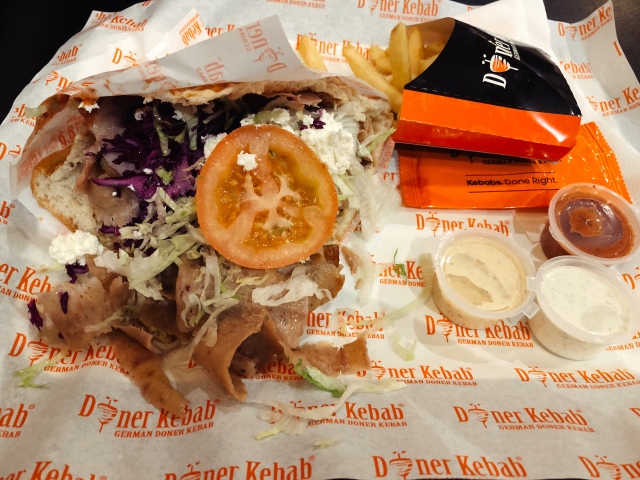 I’d paid extra for feta, because friends in the know had told me that was the thing to do, but it didn’t feel like it added an awful lot. The fries were nondescript – in the fast food hierarchy they were better than KFC fries (but so is everything else, including not having fries) but worse than McDonalds or Burger King. I didn’t really have strong opinions about any of the dips – if pushed, I guess I’d say I quite liked the burger sauce because you don’t see it often enough these days, but I’m not sure the fries made it worth going for the meal deal. Nice to have a Coke in the classic glass bottle, though, even if there weren’t any glasses provided to pour it into.

Service was functional and perfectly polite. I had to ask for a fork, I had to ask for a glass, I had to ask for a straw (I’m afraid it was plastic) when they didn’t have a glass, but all of those requests were handled nicely. It’s not the sort of restaurant, really, where you notice service unless it’s terrible, and it wasn’t. Not doner nachos terrible, anyway, but that’s a new level of terrible I wasn’t expecting to encounter in 2019. Let’s hope the year gets better from there. My dinner came to eleven pounds, while Dr Quaff’s, with his fancy chips and freakish side order, came to closer to thirteen.

After our meal, Dr Quaff and I sat there for a bit debating the merits of German Doner Kebab. He was (and is in general, I imagine) much kinder than me – I think he found things to like and could imagine going back, although I’m not sure when or how often. For me, it falls down in far too many places. It’s more expensive than KFC and cheaper than Honest Burgers, but if I wanted fast food in the town centre where I could sit down I would, without exception, pick one or the other over German Doner Kebab. And if it’s that kind of food you’re after – if you really, really need a kebab – German Doner Kebab doesn’t do anything that isn’t executed far better by either Kings Grill or Bakery House.

I could manage a chicken doner wrap there, at a push, but as a quick choice in town a lot of restaurants would have to close before it even made my top 10 (come to think of it, Nando’s is just down the road: judge all you like, but I love a Nando’s). So what – or who – is German Doner Kebab for? I’d love to be able to answer that question for you but, truth be told, I’m stumped. Put it this way: I still maintain that you don’t have to be drunk to eat a good kebab, but even if I’d emerged from a boozer several pints to the good after an evening with the author of Reading’s finest pub blog, wild horses would be unlikely to drag me back to German Doner Kebab.