N.B. As of August 2020 Sapana Home has reopened and is taking part in the government’s “Eat Out To Help Out” scheme.

Go to Sapana Home, someone recommended on Twitter recently. Great dumplings, good curry and brilliant value. Well, I thought, how can you argue with that? In a single Tweet they’d conveyed easily as much information as you find in one of my reviews, so the least I could do was act on the tip-off.

It’s a low-key place at the end of Queen Victoria Street closest to the station, and the inside is unprepossessing and unpretentious. A long thin room, it has some little tables for two at the front and a couple which can seat four at the back near the counter (downstairs is bigger, but a bit like a cellar and not a room you’d want to eat in unless it was full and had some atmosphere). And Sapana wasn’t full when I got there around half-eight on a weekday night – although, unusually, it was almost full when I left.

There’s no website so I wasn’t sure what to expect. I’m so used to checking out menus before I go to a restaurant to review it that it was a strange experience seeing it for the first time in the restaurant and being expected to know what I wanted to eat pretty much there and then. The pressure! (Yes, yes, I know: this is how it is for most people in most restaurants pretty much all of the time).

That said, the menu at Sapana couldn’t be more helpful, as it not only describes the dishes but has lots of photos of the food. Yes, photographs. Normally, these conjure up the whiff of package holidays (and garishly saturated pictures of English breakasts. And flashbacks about holidays – and English breakfasts – I’d sooner forget) but in Sapana they were very useful because my experience of Nepalese food is limited and it was nice to know what you’re letting yourself in for.

So what was I letting myself in for? Well, momos for a start: all the reviews I’ve read mention them so it felt rude not to sample them. You get a choice of fillings and can either have them steamed (if you’re feeling virtuous), deep fried (if you’re not) or pan-fried (if you’re not but you want to kid yourself that you are). Mine were the latter, packed with chicken and every bit as good as everybody says – with hints of lemongrass and coconut, delicious with the spicy accompanying sauce. Generous, too: I think this helping was something like six pounds and easily divided between three without leaving anybody feeling short changed (their close relative, the gyoza, costs about the same over at Wagamama for half as many).

Of course, that didn’t stop the three of us sampling two other starters. Of those, the best was definitely sukuti bhatamas – dried buffalo meat in herbs and spices with soy beans, onions, garlic and chilli. The meat was in little intense crispy nuggets, somewhere between the texture of biltong and really good pork scratchings, in a very, very hot sauce, topped with crisp raw red onion. The beans with it were a little disconcerting: I was expecting them to be soft but quite a few were crunchy, hard even, but once I got my head round that I enjoyed the whole lot. It was topped with fresh coriander and served with a helping of sauce which was either the same as the one which came with the momos or too close for me to be able to tell the difference. Halfway through this dish the waitress thoughtfully brought over three glasses of water, not a moment too soon (that kind of thoughtful, polite service was repeated all evening).

The siu mai – pork dumplings – were less impressive. I was expecting a fluffy steamed pork bun type affair but these were gelatinous pork cylinders wrapped in a thin layer of wrinkled pastry. There wasn’t any flavour to them, either, unless you dipped them in the fiery chilli sauce that they came with. Partly my mistake, I suspect: if I’d done my homework better I’d have understood that Nepalese food had elements of dim sum in it, but never mind.

If the starters were a mixed bag, they were at least an interesting bunch – lots of fire and flavour, texture and contrasts. That’s what made the main courses baffling, because they were so bland by comparison. Two of us had thali, those metal compartmentalised plates that offer (in theory) the chance to try lots of different things. The reality was more the opportunity to experience a wide range of disappointments.

Dhal was stodgy and bland with an odd undertone of something like evaporated milk. Spinach was floppy and strangely flavourless. The vegetable curry, served crunchy and cold in a nutty sauce, was the pick of the bunch but there was nowhere near enough of it to save the day. The meat curry – not an awful lot of it – was watery and not very interesting, with enough shards of bone in the chicken and enough gristle in the lamb that you didn’t feel you could risk eating a piece without a thorough inspection (a process which, I’ve always thought, rather gets in the way of a relaxing meal).

You also got a lot of rice, more rice than you could humanly eat, with a limp shard of poppadom on top – although the variant with chapati roti, which also included rice, was a much better bet. This all cost eight pounds – not a huge amount in the scheme of things for a main course, but it still didn’t feel like good value.

The other dish was chicken chow mein. A perfectly decent chow mein, freshly made with a decent amount of chicken, a few bits of shredded cabbage and carrot and noodles. Lots and lots of noodles. It didn’t seem to me to be any different to one I would get from a Chinese takeaway – no extra spice, no added flavour or exotic ingredients; just a plain chow mein. I’m not sure what I was expecting, but it wasn’t this: like the siu mai, I felt this was probably my mistake. I’m never sure it should be possibly to order badly in a good restaurant, but I did have an increasing feeling that maybe I hadn’t given the place the opportunity to do itself justice. 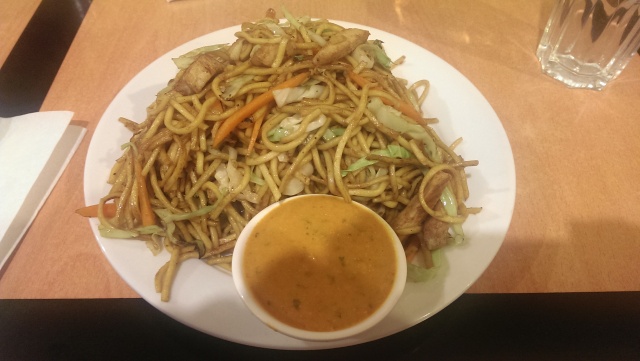 That’s the main reason we ordered dessert, even though we weren’t hungry any more, but it didn’t really improve matters. The gulab jamun were a shadow of other versions I’ve had elsewhere in town. Instead of being squidgy, doughy balls, soaked in glorious sweetness, these were hard and very cold with minimal syrup. It was like they’d taken the dish I love and extracted all the fun. The other dessert was jeri, deep fried batter in sugar syrup. I was hoping for something reminiscent of doughnuts or churros (or even fritters), but instead it was just a maze of crispy tubes, the texture almost stale. Again, at two pounds it wasn’t by any means an expensive mistake, but it still felt like a mistake. 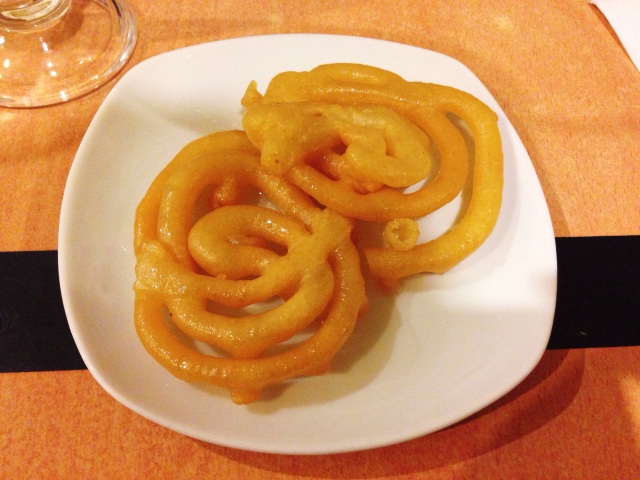 Dinner for three came to fifty-seven pounds, not including service, for three courses, a couple of soft drinks, a couple of glasses of wine, a mango lassi and a couple of cups of chai. So inexpensive, and yet I still can’t bring myself to wholeheartedly recommend Sapana Home. It’s a pity, because the service is really good, and they deserve loads of credit for making a go of it in such a central location, but too much of it just wasn’t to my taste. So yes, maybe I did order badly – it’s quite possible, because the menu is full of less conventional options I didn’t quite have the courage to try (chicken gizzard and lamb’s intestines, for instance). Or perhaps Nepalese food is generally bland; I’ve not had it enough to be able to say. Either way, I’m sorry that I can only partly endorse the tip I received on Twitter. I’d definitely go for the momos again at lunchtime, when I fancied something different (they really are very good, and worth a visit in their own right) but then I’d probably settle up and quit while I was ahead.