N.B. I Love Paella stopped operating out of Workhouse Coffee in January 2016. I’ve left the review up for posterity.

There are a number of places in Reading that people have asked me to review that aren’t quite restaurants: a couple of supper clubs, for instance, or the training restaurant at Reading College. I’ve so far not reviewed them because I’m not sure how useful it would be to write about a menu that changes at every single sitting. Who’s to say that one visit would be representative of what’s on offer? With Reading College in particular it also seems a little unfair to review chefs in training – I wouldn’t have wanted to share my GCSE coursework with the outside world, let alone have some snooty blogger bitch about my handwriting, my meandering essays or my poorly drawn graphs.

I Love Paella is that most unusual of things here in Reading: a pop-up restaurant. It operates out of the Oxford Road branch of Workhouse Coffee as part of a laudable project by Workhouse to encourage independent businesses. It’s slightly different from the supper clubs, though, in that it has regular opening hours (from Friday afternoon until Sunday afternoon) and a reasonably stable menu. They’ve not been going long but their enthusiasm on Twitter is infectious, so I thought that if Workhouse can do its bit to support little start-ups, the least I could do is to hop on a trusty number 17 bus one evening and head west to check it out.

In the interests of full disclosure, I must also confess I also had a sneaky side trip to the new improved enormo-Lidl (other supermarkets are available) next to Reading West station, because a friend had recommended their £8 Pouilly Fumé to me. They didn’t have any but I was extremely tempted by some retro biscuits. Have you forgotten how good Gold Bars taste?

The seating inside, as you’d expect, is more suited to coffee drinkers than to people stopping for an evening meal, with mini tables and stools along the windows and a big, high bar area in the middle, but it’s comfortable enough. I Love Paella doesn’t have a license so – having done our homework – we took along our own bottle of wine (not from Lidl, I might add) which the waiter gladly opened for us. I say waiter, but let’s call him the owner – he was the only person we saw working there all evening, and I got the distinct impression that I Love Paella is a one man operation.

The menu is, well, confusing. There’s a blackboard by the counter which lists all the options, except that I suspect they weren’t doing some of them that night, and there were a few specials which weren’t on the blackboard – and we ordered a couple of these because they sounded so good. I got the impression that the owner genuinely decides to cook and try new things on a weekly basis, which is brilliant, but just to be slightly hyper-critical I would have thought the whole point of having a blackboard is that you can easily update it whenever you need to. Being hyper-critical might become a bit of a theme during this review because, as I was to discover, finding anything to criticise at I Love Paella is quite the challenge.

That said, I should also point out that the name, I Love Paella, is a tad misleading. It’s one thing on the menu but the rest of the menu is a mixture of salads, montaditos (small sandwiches) and coques (I felt too awkward asking for one, and good luck Googling one – it turns out they’re a bit like tacos). I pretty much wanted to order everything but showed a little bit of restraint – not much though, as you’ll see when I run through what arrived. The pacing was beautifully done, just as it should be for this kind of dining, so items arrived here and there, just as we’d finished one dish and were ready to move on to the next. I liked being able to watch the rest of the Oxford Road go by, drink my wine and meander through the food on offer – a nice contrast from having tapas in Andalucia where you’re normally rammed at a bar, sherry in one hand, wielding your elbow like a deadly weapon (which, as it happens, mine is).

First up was the goat’s cheese salad, recommended by the owner: a generous plate of frisée, lambs lettuce, radicchio, walnuts and cherry tomatoes with balsamic glaze and a huge slice of pan fried goat’s cheese on top. Not the most complex dish in the world, and very much the sum of its parts but that didn’t make it any less tasty; the combination of the sweet glaze, the walnuts and that creamy, slightly oozy cheese was particularly lovely. A big part of me wanted to see the log of cheese that slice had come from but I was jolted from my reveries about a giant caber made out of cheese by the arrival of the next dish. 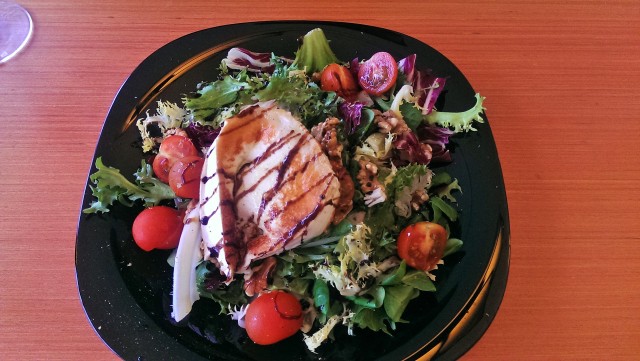 Pulled pork empanada doesn’t do it justice. I’m so bored of pulled pork I can’t even tell you – it’s everywhere. Even at Reading’s street food festival last month everybody was flogging the stuff. I just want to see some unpulled pork (and some unsalted caramel while we’re at it). But the point is that I Love Paella’s pork was a million miles away from the sweet, sticky, saturated America version you can find everywhere. Instead it was fine shredded strands with clever spice and heat, Private Eye to most places’ Take A Break. The pastry was gorgeous too, a corn shell which reminded me of the empanadas I once had at Arepas Caffe – but this was miles better than that, light and golden and slightly sticky underneath. It was absolutely crammed with filling, and even then I bitterly resented having to share it with someone else (when you go – and I hope you do – have one to yourself).

Next up was the legendary paella (which we did order two of – it is the name of the establishment, after all). This may not have matched the heights of the empanada but not much does – it came in a cute miniature paella pan, a decent portion of vividly yellow rice with prawns, lots of pieces of squid and a solitary mussel with a wedge of lemon and the crowning glory, a dollop of extremely good aioli. I’m sure paella experts – and I’m not one – would have an opinion about whether it should have had chicken in it, or chorizo, or peppers. But who really wants to go to dinner with a paella expert? Just imagine. Speaking as a relative novice I loved it. The squid was lovely – firm and yielding, not at all rubbery. The rice still had some nutty bite to it and the flavour was beautiful. But the highlight of the dish had to be spearing one of those prawns, dipping it in the aioli, eating and grinning. I did that quite a lot. 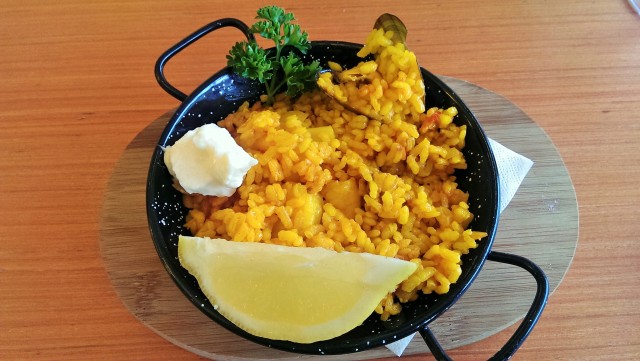 Next up was the enigmatically named “Cuban sandwich”. This, truth be told, was really just another vehicle for that fabulous pulled pork – a toasted panini with pulled pork and cheese. The panini was nice and crisp, the cheese was melted (something you should be able to take for granted with a panini but isn’t always the case) and the pulled pork was just as spicy, rich and tender as before. If this had been the first dish I ate I’d have fallen a little bit in love, but as it was it just reminded me that I should have ordered another empanada. What’s the Spanish for l’esprit d’escalier? 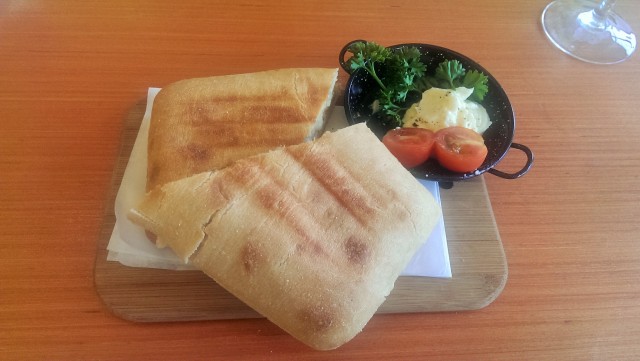 I could have – should have – stopped there, but the problem with ordering all your food right at the start is that restaurants have a nasty habit of bringing it out and expecting you to eat it. So I had to soldier on through the final dish. It didn’t even have a name: I got the impression it was something dreamed up on the day because the owner had some extra chorizo to use and was looking for something tasty to make. Oh my goodness. This was a long piece of puff pastry studded with small pieces of chorizo and cheese and then baked into melty-submission. It was like a particularly suave sausage roll – rich and piquant and very, very decadent. It might have lacked the sophistication of the empanada but, in terms of pure happiness, it was right up there. 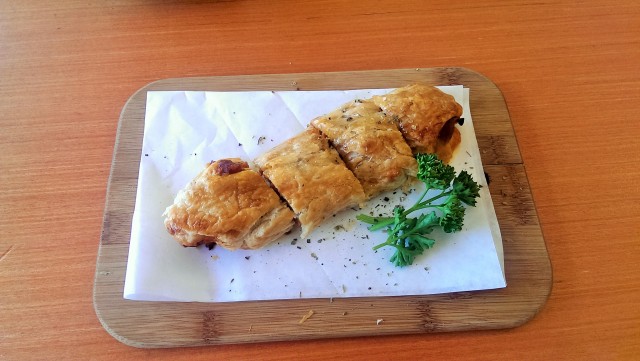 Service throughout was friendly and enthusiastic, with the owner patiently explaining the dishes that weren’t on the menu as well as the ones that were. When the restaurant was busy he was run off of his feet bringing over plates or assembling take away bags but it was still a far warmer welcome than I’ve had from many well-established restaurants and most chains (a lot of them should head over to I Love Paella and pick up some tips – like how to actually look pleased to have customers, for a start). The total bill for one salad, four small dishes and two small paellas was just over twenty-five pounds (it’s worth noting here that they don’t take cards and all the ATMs within 100 yards or so charge for withdrawals, so take cash with you). Admittedly, we brought our own wine and I don’t think we were charged corkage but by any standards you care to name that’s an absolute steal.

So, here’s the hyper-critical bit: I don’t like the name. I just don’t feel like it really sums up what the place is about. I’d like to have seen more variety in the menu. Very little of it felt like true tapas; I’d have loved to see the kitchen serve up some garbanzos con espinacas, or some tortilla, or a selection of really good jamon. And I also wasn’t quite sure if this was a lunch venue or an evening venue – most of the dishes felt more like lunch dishes, so if you want to explore I Love Paella you might be better off doing that on a Saturday or Sunday afternoon. It was nowhere near busy the evening I went, with a few tables and a couple of people dropping in to pick up takeaways.

When I talked to the owner he said he had plans to widen the range of food and hopefully expand the opening hours. But to do that he needs customers which, of course, is where we all come in. I really hope he gets them, because – and I’m sure you figured this out some time ago – I absolutely loved I Love Paella. It’s not just that the dishes were so tasty, although they were. It’s not that the service was so good. It’s not even the fact that I felt so at home sitting at my table, drinking my wine and daydreaming of Seville or Barcelona (no mean feat in RG30, let’s be honest). What really struck me about I Love Paella is how consistent it was. Everything was good, it’s a small menu, it changes fairly regularly and I just felt utterly confident that I could have ordered anything on it and had an excellent meal. That’s down to many things, but it doesn’t feel like beginner’s luck to me.

4 thoughts on “I Love Paella”