One thing I rarely talk about in these reviews is the background music, but with Thai Table I really feel I should make an exception. There are some places where it’s perfectly normal to hear a muzak version of “Don’t Stop ‘Til You Get Enough” – in a lift for example, or in the toilets of a shopping mall (more Broad Street than Oracle). Or, for that matter, in Room 101. But I wasn’t expecting to hear it in Thai Table, a smart Thai restaurant just the other side of Caversham Bridge. I’d like to say that it was an isolated incident, but during my meal the vocals-free mangled hits kept on coming. It was as if Kenny G was in the room with us, and surely nobody wants that. Well, except Mrs G perhaps.

I wasn’t expecting to find myself in Thai Table, truth be told. It’s been on my list for eons but I still find it a little difficult to motivate myself to review Thai food – it’s rarely terrible but rarely stellar, and Reading’s Thai restaurants can feel much of a muchness. But then I happened to walk past it on my way back from Progress Theatre’s excellent production of Merry Wives Of Windsor in Caversham Court Gardens (no, I hadn’t seen that one either) and the view piqued my interest. Gone was the chunky, dark, rustic furniture I remembered and instead the interior looked warm, buzzy and contemporary, all snazzy geometric prints and clean, simple chairs and tables. I made a mental note to move it to the top of my list, although if I’d known about the music things might have been different.

The first thing that struck me about the menu was the front page. It’s not every menu where the proprietor’s little spiel gives you his email address and invites you to contact him, and it’s not every menu that he appears to have signed by hand. Silly, perhaps, but I liked this. It felt touchingly old school. Aside from that the menu looked much like most Thai menus – generally well described with a few interesting chef’s specials but also many of the usual suspects. Some of the items were described as signature dishes, which I also found interestingly old school.

As is traditional, we had some prawn crackers first as we watched dishes turn up at the table next to us and wondered whether ours would look (and smell) as good as that. They were a known quantity as ever, but they came with a little split bowl of sweet chilli sauce and plum sauce. Both were nice but there was so little of either, and the dish was so awkwardly shaped, that it was almost impossible to dip the crackers in; a nice idea slightly gone to waste.

The first starter was the pet pet squid. Sounds strangely Geordie, doesn’t it? Bits of this were very well done. The small curls of squid – fresh, not bouncy – were cooked in one of the best batters I can remember; it was superbly light, crispy and bubbled and it didn’t come away from the flesh the moment you took some cutlery to it. But it wasn’t perfect: it wasn’t seasoned and I didn’t get any of the aromatic Thai herbs it was meant to be cooked with. Instead, there was yet more of the ubiquitous sweet chilli sauce and lots of herbivorous padding – I didn’t eat any of the shredded white cabbage or the curly parsley and I assume nobody eats the carrot “flower” unless ravenous beyond words. Most bafflingly, the menu gave this dish a three chilli rating but there was almost no kick to it at all. But, for all that, you could have far worse starts to a meal than fresh, beautifully battered squid and sweet chilli sauce, so it felt a bit churlish to complain. 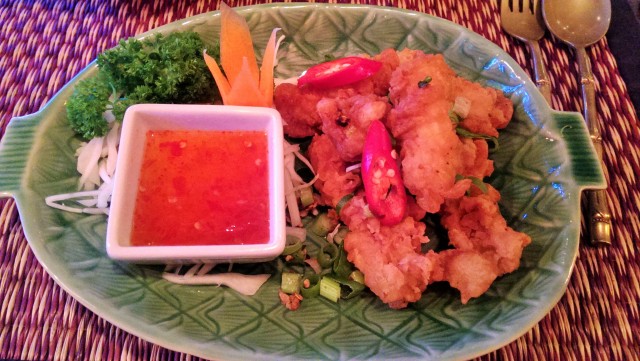 We also had Changmai sausage, which as you can see from the picture was a sausage. Cut into slices. So far so bad buffet, but it was a really, really interesting dish to taste. The menu says it’s home-made and I’ve certainly not tried one like this – with ginger and spices and (I think) some lemongrass. The texture was coarse, almost crumbly without being dry and the whole thing was like a holiday for the taste buds. I liked it a lot, but again, the rest of the stuff on the plate felt like pointless faff: iceberg lettuce, this time, with thin sticks of fresh ginger. A very promising beginning: I was starting to understand why the owner was prepared to sign the menus. 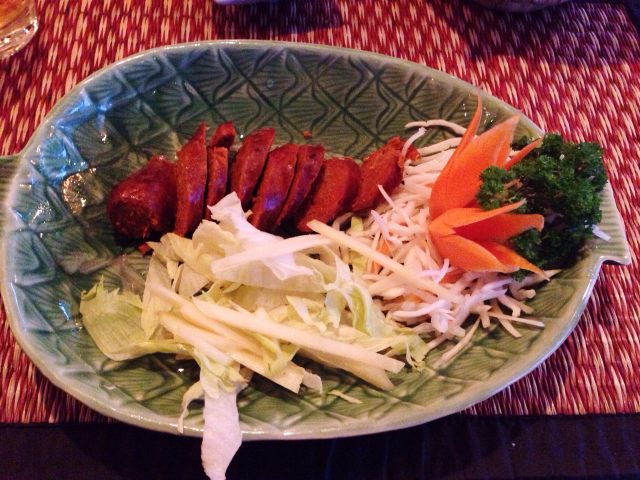 After this we sat with empty starter plates in front of us for some time, and they were only taken away about a minute before the mains arrived, presumably because the serving staff suddenly realised that new plates were on their way.

Beef massaman was described on the menu as a signature dish, so I felt I should give it a try, but in truth I ordered it with some hesitation. One thing I’ve learned from eating out is that some restaurants use the words “slow cooked beef” with almost poetic licence: I still remember beef rendang at the Moderation, with all the texture of a trampoline, or my last meal at Tampopo before it closed where I had to send a beef dish back because it was like trying to eat a branch of Clark’s. But again, Thai Table passed the test: big chunks of perfectly braised beef which broke into delicious shreds.

That alone would have delighted me, but the sauce was just as magnificent: Massaman curry can often be sweet and unsubtle, but this was a world away from that with proper heat and a bit of spice, maybe not as much complexity as I was expecting from the menu but still a big Thai hug of a thing. Even the firm new potatoes and the toasted fragments of cashew worked perfectly. Normally my favourite bit of a Thai meal is pouring the sauce on to the coconut rice and eating it at the end, but this challenged all that because every mouthful was marvellous: I could have eaten it every day for a week. 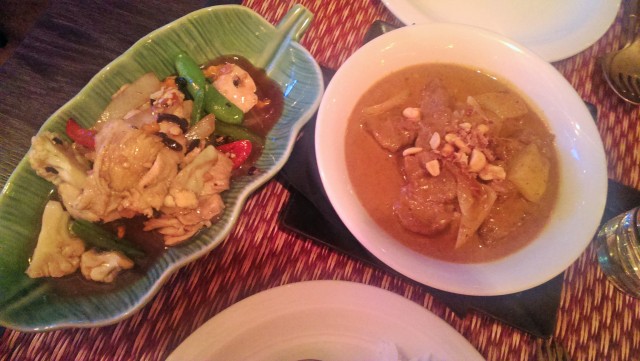 Stir fried chicken with black bean sauce sounds a bit prosaic on paper, but in practice it was also superb. Part of that is about the veg rather than the chicken. I loved the barely cooked cauliflower, the florets the perfect shape to capture the sauce. I also liked the sugar snap peas, with similar well-judged crunch. And the black beans themselves, beautifully intense, firm and slightly nutty rather than pulpy mush. And that’s before I get to the sauce – so rich, garlicky and salty (there was some oyster sauce in there too, which probably explains it) that by the end I was tilting the bowl to get the last drops onto my spoon. It wasn’t easy – the bowl was a shallow one in the shape of a banana leaf – but that wasn’t going to stop me trying.

After the main courses our plates were cleared a little quicker, and we waited for someone to bring us the dessert menu. By this point I wasn’t hungry, but I was at least curious about whether the desserts would match that high standard and, crucially, whether they would appear on a menu that wasn’t laminated and didn’t have garish photos on it. No dessert menu was forthcoming. We waited a bit longer. Still no dessert menu. The group at the table next to us, also bored of being neglected, asked for a dessert menu. They got one, but it didn’t jog the memory of the waiting staff about whether anyone else might want to see it. Honestly, if it wasn’t for the onslaught of sax classics playing in the background I’m not sure how I’d have coped. And that was the problem with service for the whole evening: it was never rude, it was never unpleasant but – for most of the time – it was never there. We gave up and settled up instead.

To drink we had a couple of beers (they have Chang and Singha, both of which were good) and a couple of glasses of Thai white wine, Monsoon Valley, which was really lovely – off-dry and almost a little syrupy in the mouth. The wine list actually had a fair few bottles I would have been tempted by on a different night – an Australian shiraz, a German Riesling and a Fleurie among them – most of them under twenty pounds. Our bill came to fifty-six pounds, not including a tip.

A friend recently asked me to recommend a Thai restaurant – she has a friend visiting from France who has specifically asked for Thai food. I told her that if the food’s more important than the room she should go to Art Of Siam, but that if the room is equally important she should head for Thai Corner. I have to say, I’m now tempted to contact her and tell her to pick Thai Table instead. The food was fantastic – the best Thai food I’ve eaten in Reading – and had me revising my list of go-to restaurants in town. The room is cool and contemporary. But here’s the drawback: the service felt like an afterthought, a necessary evil to get the food out and the bill paid but with little thought given to making the customers feel welcome. Is two out of three good enough? Meat Loaf would say so. But he might think differently if Kenny G ever got round to covering any of his songs.