Long before George Clooney and his tuxedo wafted into Berkshire the original famous George – Cole, of course – was ensconced in Stoke Row, enjoying his twilight years in a lovely almost-in-Berkshire village with its very own Michelin recommended pub, the Crooked Billet (itself famous for catering the first of Kate Winslet’s weddings). And you can keep your Clooneys and Winslets: I bet if you’d happened to bump into George Cole in the pub you’d have had a terrific evening.

It seemed fitting to go to the Crooked Billet for the ER second anniversary review, as a mark of respect and all that, but it wasn’t to be. Even if I hadn’t got lost on the way (just once, I promise, but it could easily have been more) it still felt like too much of an expedition, too far off the beaten single-track with no passing places, not to mention the fact that it didn’t have any tables available when we arrived. Even restaurant reviewers sometimes don’t realise that they’ll need to book. On a Tuesday night. Miles away from civilisation.

Deciding where to go instead involved much head-scratching, especially as the beautiful villages out that way are usually sited in areas of outstandingly poor mobile reception. Instead we drove to Henley (getting lost another time) and drifted through town wondering where we could eat before everywhere shut up shop for the night. So Villa Marina was the second choice this week, although it nicely echoes Pepe Sale (the first restaurant I ever reviewed), also an independent Italian restaurant with a touch of old school style.

The restaurant was reasonably busy for a Tuesday night if not packed out, and it had the sort of warm prosperous glow that will draw you in after an hour of fruitless driving around the Chilterns (but I was hungry, so in truth a Wimpy might have had the same effect). The main dining room, an L shaped affair, was classically smart with crisp white tablecloths and cleverly done lighting: every table had a spot light on it, a nice touch which meant it managed the trick of being intimately lit but bright enough to see the food. The smartness extended to the clientele – all the men in the restaurant, without exception, were wearing collars. I can’t vouch for the redness of the trousers, but you wouldn’t have bet against it.

The menu was classic Italian with few surprises but quite a lot to tempt. I was impressed by its compactness: only a couple of pasta options (in their rightful place in the starters section and little or no encouragement to “go large” for a main) and no pizza. It’s didn’t look like a menu that was trying to be all things to all people, and that gave me confidence. We made our decisions – rather difficult ones, as it happened – while eating soft brown rolls spread with sundried tomato paste and salty, powerful tapenade.

The first starter was one of the specials that night; avocado with prawns and crab. It was very generous – a whole avocado filled with plenty of prawns and crab in a pretty standard dressing a la Marie Rose. There were little signs of finesse here and there (someone had spent time cutting red and yellow peppers into very, very small dice) and the big wedges of tomato were surprisingly tasty which hinted at decent ingredients. And yet, even though I should have loved it, I just liked it. Perhaps the blame is mine: it’s the kind of dish I order frequently – Dolce Vita does a similar version with smoked salmon – so maybe I should have been more adventurous. Either way, it was nicely done but not exciting. 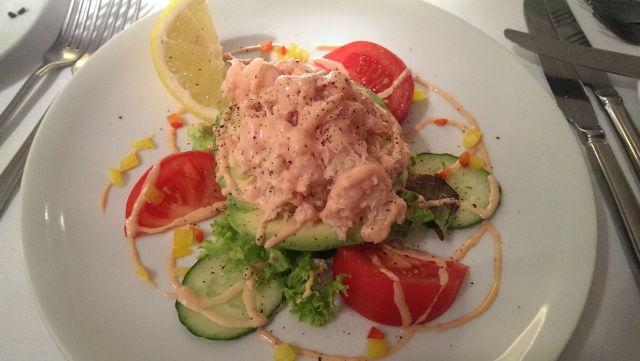 The other dish was more successful, if also slightly restrained. Orechiette with prawns in a tomato sauce was quite a lovely little thing and, if anything, that overstates how much pasta was involved and understates how many prawns there were. The prawns were beauties, too – six big fat firm fresh specimens with just enough sweetness. The sauce was earthy and savoury, also with a touch of fish (perhaps there was some stock involved). Orechiette is one of my favourite pasta shapes, just right to trap sauce without being a faff to eat as conchiglie can be, and it worked perfectly. A little wilted rocket, some sweet cherry tomatoes and intense sundried tomatoes rounded things out nicely. I would have liked the pesto advertised on the menu, but mainly out of fear of missing out: I can’t say it would have improved it. 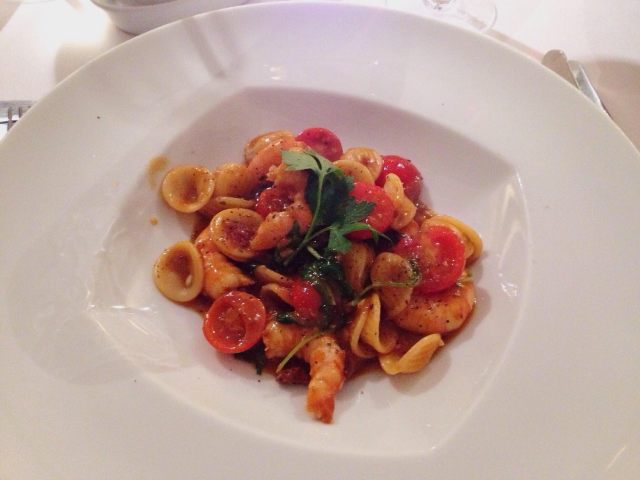 The mains followed far more quickly than I’d have liked. Monkfish with tarragon and brandy cream sauce was a delight: three decent sized pieces of monkfish in a deceptively light sauce with hints of tarragon (I always find tarragon a bit coconutty, although I suspect this is some form of culinary synaesthesia unique to me). This was under sixteen pounds, which I thought was pretty good value: most restaurants would charge more and/or serve a portion so small as to need a microscope (I still remember the weird little nuggets of cotton-wool I was served at River Spice: that was a monkfish waiting to be defrocked). 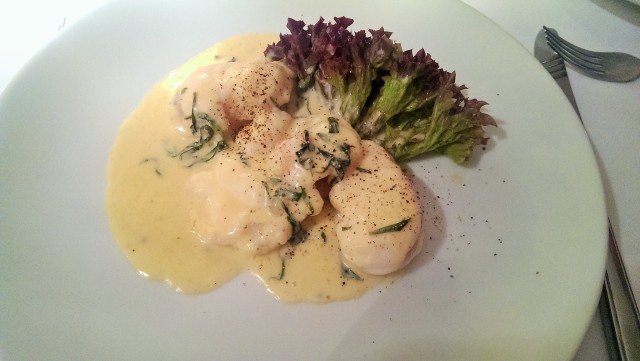 Saltimbocca was good but didn’t quite hit the heights – the veal itself was superb, delicate and tender and the parma ham was good quality stuff. But there just wasn’t enough sage which meant it didn’t have the earthy punch that it needed, and the sauce was a bit too light, thin and subtle. Like much of the food it was a little too well-behaved when what I really wanted were a few more sharp edges. I wonder which came first – the crisp décor and the well-dressed clientele or the impeccable, slightly safe food? 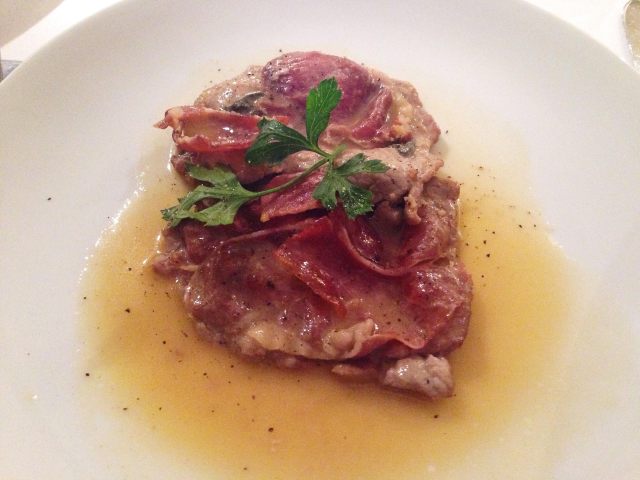 You pay extra for vegetables. We got a bowl of sautéed potatoes (salty with a hint of rosemary) and another of steamed, buttered mange tout, carrots and sugar snap peas, along with two of the tiniest florets of broccoli I have ever seen. The menu says that they are three pounds fifty but neglects to mention that this is per person, and that felt a bit cheeky when you don’t have any choice but to order it (the single lettuce leaf that comes with the monkfish won’t count as vegetables in anyone’s book). Perhaps the mains weren’t quite as good value as I’d thought.

That said, the extras were good – the potatoes were beautifully crisp (deep fried rather than done in a pan, I’d guess) and the vegetables, with just enough crunch and taste, were perfect with what sauce there was. But still, three pounds fifty per person stung a bit when the bill arrived. Three pounds was much better spent on the accompanying zucchini fritti we ordered, because these were fabulous – super light, wonderfully crispy, coated (I think) in a little semolina flour. An undignified fight broke out for the last few little scraps: I won.

Another sign of how old-school Villa Marina was came when it was time to choose dessert. Nothing as modish as a menu here, instead the dessert trolley was wheeled round to our table and we got to review the selection. Dessert trollies also feel like a dying breed (I’m not sure any Reading restaurants have one, since Casa Roma closed) and I’m never sure how I feel about them. On the one hand, it’s nice to have a clear idea what your dessert will look like, on the other I quite like a hot pudding and a trolley pretty much rules that out. I was tempted by the tiramisu but went for the chocolate cake, essentially a layer of mousse on top of a sponge base. Again, it was a solid but unspectacular choice, sweet without being synthetic but certainly not overflowing with complexity or cocoa solids.

If I went back I’d have the tiramisu, but it’s an if not a when and there are a few reasons for that. One is the service, which was very much Jekyll and Hyde. The waiters were friendly and suave, smiling and looking after their customers. Even the slips and mistakes were overflowing with charm in a rather crumpled, eminently forgivable way. But the waitresses seemed to have attended the Rosa Klebb Finishing School. The young lady who introduced the dessert trolley had a way of rattling off the list of options that was so abrupt and unsmiling that it reminded me of a prison camp guard. Similarly, there was an older lady who stalked through the room with an expression so dour that I was slightly scared to engage with her. If the men were old school, the women were borstal.

Aside from the service, the other problem was the pace of everything – we’d finished three courses and been rushed out of the room in little over an hour, and that always puts me right off a place. Part of that I suppose is down to the dessert trolley and having your third course dished up right in front of you but even so, leisurely it wasn’t. The total bill, including a 12.5% “optional” service charge was eighty-five pounds. That was for two and a half courses and one glass of wine each (the recommended wines by the glass, a chianti and a chardonnay, were both nice enough to merit a mention but neither made me devastated that I couldn’t have more).

The size of the bill was a nasty surprise: adding the service charge slightly ruined it for me because it made the total look worse than it was (and, left to my own devices, I highly doubt I would have tipped that much). Quite aside from the stealth charged vegetables the price of the special starter – nearly eleven quid – also made my eyes water, ever so slightly. Perhaps if the whole affair had taken a couple of hours I wouldn’t have minded so much, but I did keep thinking about other ways that I could have spent the same amount of money. Nobody wants to have that uppermost in their mind when leaving a restaurant.

If you were opening a restaurant in Reading today, you wouldn’t open Villa Marina. That kind of high-end, slightly starched Italian restaurant, although not dying out per se, hasn’t been seen in Reading for a very long time (perhaps Topo Gigio, long closed on the top floor of King’s Walk, was the closest equivalent). I quite enjoyed my visit there, although it did feel partly like an evening out and partly the gastronomic equivalent of time travel. No shame in that, but it did make me value Reading’s restaurants just that little bit more, from the slightly naff marble tables at Pepe Sale to the no-frills room at Papa Gee, looking out onto the Caversham Road rather than the Thames. For that matter, it also made me appreciate how warm and reliable the service at Dolce Vita is, compared to the partially defrosted equivalent in Villa Marina. It all felt a bit Henley, and if there was a blog called Edible Henley I imagine they’d rave about this place. But we do things slightly differently in Reading, I’m very pleased to say.